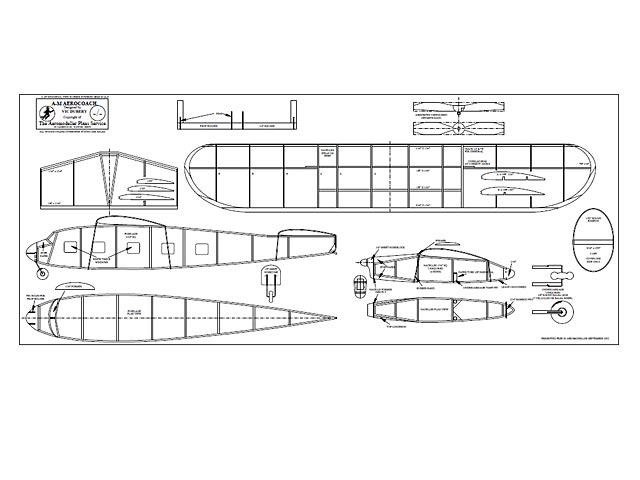 Quote: "IF you have always fought shy of any twin-engined model, here is a chance to have a go without much expenditure of time and money. For a few evenings work you can have a model which, while simple, looks and flies realistically and does not create any storage or transport problems, in fact it will go into a shoe-box!

The construction is straightforward and all important notes are on the full-sized plan. The best way to build the wing is all in one piece, flat on the board (after tracing the wing and tail halves as indicated). Do not cement the main spar overlap until all is set. Then crack the trailing and leading edges to make the dihedral on the outer panels, prop up the tips with 1 inch blocks, and cement the spar overlap and cracks. The surplus bit of centre-section spar is trimmed from the underside after the cement is dry.

When the nacelle sides are being assembled, a temporary spacer is used to hold them together at the front. After the front former is set in place this must be cut away. Carve the noseblocks carefully from 1/4 in sheet and don't forget to fit a plug on the back of each, made by reference to the hole former. Small washers, or home-made tinplate bearings, are used to receive the 20 gauge propeller shafts.

The success of any model depends on its airscrew so make these with care, and be sure to make them opposite hand. Of course, if you make them both the same the model will still fly alright, but you will miss the treat of having a 'torque-less' trim. Commercial props can be used, machine cut balsa ones if obtainable small enough, KK plastic cut down, or even Frog Mark IV Interceptor (oz4920) spares, but left-handed ones are not obtainable. The original model was improved with a simple catch freewheel.

Use coloured tissue to cover the model, a dark colour on fuselage, nacelles and fins (one side only) and a light colour on wings and tail. To improve the final appearance and make it more realistic make the following additions:

(i) Dark tissue over the top of the wing at nacelle stations and the portion over the fuselage.
(ii) a similar (triangular) strip between the centre ribs of the tail-plane.
(iii) white tissue 'windows' on fuselage.
(iv) registration letters of tissue stuck on wing and fuselage.
(v) thin strips of black tissue or indian ink lines to represent ailerons, flaps and elevators.

All except the fins should be water shrunk and doped with thinned dope - one coat on wings and tail, two coats on fuselage and nacelles.

Power in each nacelle was two strands of 1/8 flat rubber 12 in long. For best results this should be rope-tensioned but neither this nor a freewheel is absolutely essential.

All that remains now is the prop-holder to hold one airscrew while the other is being wound. This gadget is essential, otherwise winding needs too many people and launching is difficult. It is plugged into the fuselage nose.

Finally strap firmly, with rubber bands, the wing and tail on to the fuselage and the nacelles complete with props, rubber, and wheels, on to the wings. With the wing in the position shown, the CG should be somewhere between the centre-section spars. Glide test, adding incidence to the wing to produce the flattest glide. Then plug in the prop-holder and wind about 100 turns (the correct way!) on each prop, hold as for an ordinary hand launch, remove the prop holder smoothly but smartly and let go with suitable forward speed. It will go straight as a die if there are no warps.

Gradually increase the turns and watch for any signs of a stall. It should not stall, as adequate downthrust is built in, but this can be increased either at the nose-blocks (make sure both sides are identical) or under the leading edge of the wing at the nacelles. If more than 1/16 in is required, something is wrong - check the CG and test glide again. If only a slight stall is present, this can be corrected by offsetting the tail to produce a turn.

This little job takes off and flies very steadily and makes ROG flights around 45 seconds at a low altitude - on full winds (900 turns). "

Quote: "Finally there is the AM Aircoach designed by Vic Dubury, a prolific designer of the time. The design was a centrefold plan designed to allow people experience the joy of twin rubber powered jobs with only a small outlay of cash. A nice easy design which would only involve a few nights work but it certainly looks very scale like - except for the nacelles which are relatively large due to the fact that they contain the motors. It would, for all that, still be an entertaining build. As with all my offerings the plans are only CAD tracings of scans from the original articles and so may well contain errors. If you do decide to build from them please take care and measure twice before cutting." 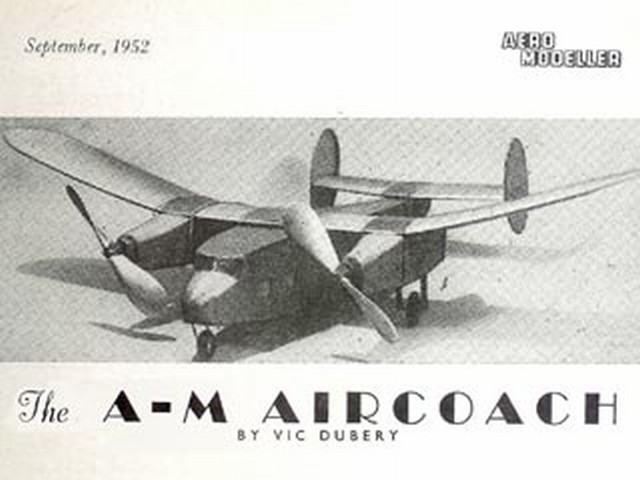