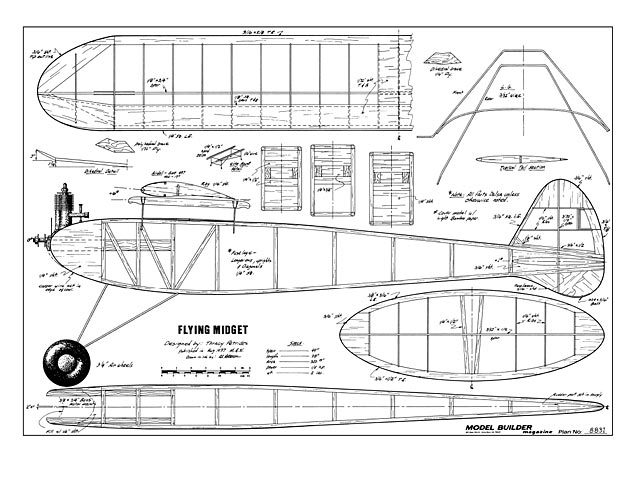 Well, they did it again! The subject this month was published in the August 1937 issue of MAN, and credited to Thracy Petrides and Malcolm Abzug. We don't know which one was the perpetrator. The drawing was by Abzug, but the lines of the model, particularly the wing, look like Petrides' work.

What did they perpetrate? It's the old 'change the name of the model' trick! Title of the article is The Flying Midget Gas Model, and the writer of the article refers to the model in the text - well, most of the text, as the Flying Midget (three times in the second introductory paragraph, once under Wing construction, and once under Tail Assembly. But then, under Prop and Miscellaneous, all of a sudden the text says: The prop for the Cloud-Kisser is carved from... etc. And four sentences later, in the same paragraph, it's back to Flying Midget. Finally, the last one-sentence paragraph says: We think this new idea of making gas jobs a reasonable size is the greatest (or should we say smallest) thing that has hit gas-jobbing thus far, and after your first Cloud-Kisser, so will you!

Anyway, the 49-inch span model was truly a midget for its time, as it was designed to be powered by a Brown Jr. In modern times, it is not unusual for a 300 sq in area model to handle the power of a .19 to .35, which is about the power range of a Brown Jr. But for 1937, when Brown-powered models averaged six to seven-foot span and two to three times the wing area of the Flying Midget, it was quite a departure from the norm. It must have had a very hasty climb and glide! The long tail moment was a great help in handling the power.

Nothing tricky about the construction. It was suggested that the stab be built and covered prior to being inserted in the fuselage. Top of the fin/rudder is built next, then the spar is inserted through the fuselage from the top, glued in place, and then the sub-fin parts added.

Balance point is not shown or men-tioned in the text, but considering the symmetrical stab, it would probably be safe to try the first test-glides with the model balanced at 50 percent of the chord - that's with the leading edge of the wing even with the second fuselage station." 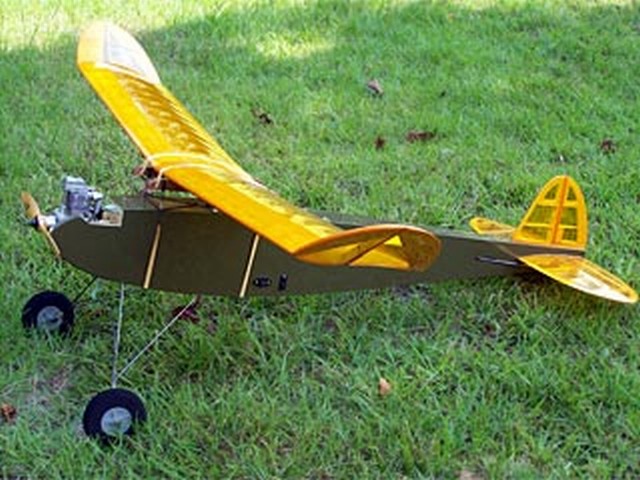 Added pics of his nicely completed model Flying Midget, thanks to cd_webb
SteveWMD - 23/07/2013
Add a comment