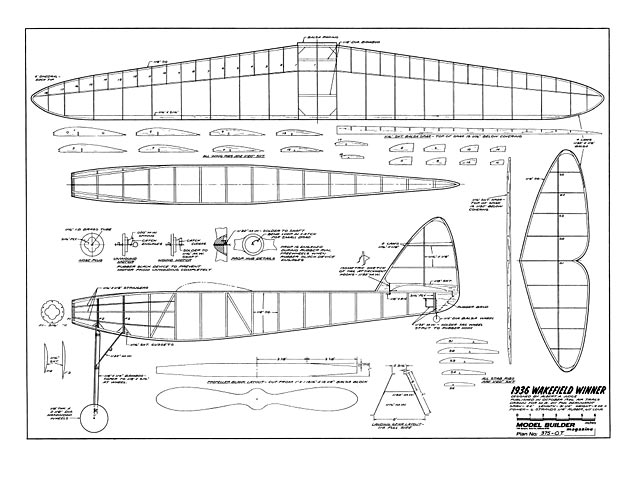 First published in Air Trails, October 1936. This here is the plan as it appeared in MB, March 1975.

Lord Wakefield of Hythe first put his famous cup into model competition in the year of 'Lindy,' 1927. By 1936, the cup had hopped back and forth between the US and Great Britain, and was currently residing in the United States. It had been brought here by Gordon Light's 1935 Wakefield Winner (oz10516), which was proxy flown by TH Ives on one OOS flight of 7:20, which averaged out to 2:26.6, better than any other, We have the plans for Gordon's ship too, if you are interested.

The 1936 British team came to the US with their models, and when the dust cleared, Albert A Judge had the highest average (4 minutes, 9 seconds), and the Wakefield Cup!

Judge's model featured clean, simple lines, and was indicative of the trend away from the previously popular motor stick. Judge also incorporated a rubber tensioning device, something very new for the day, and permitting his use of 6 strands of 1/4 in flat rubber 60 inches long! His device looks very precarious, at best, and we'd recommend something more up to date. Another suggested revision would be to add 1/64 plywood braces (they'll bend to the sweepback required) on the front and back sides of the main spar at the dihedral breaks.

Incidentally, the Wakefield rules were beautifully simple in those days; cabin or fuselage models of 200 sq in wing area, with a 5% (10 sq in) plus or minus tolerance, minimum weight of 4 oz (with rubber), and minimum fuselage cross section area of L2/100. Time was the average of three flights."

Planfile includes article.
Alternative version of the Judge Wakefield plan, thanks to Aeromeddler. This was printed in Vintage Corner section of Aeromodeller, April 1996 and is in turn a reprint from Air Trails, October 1936. Thanks to RogerClark for help with this one. 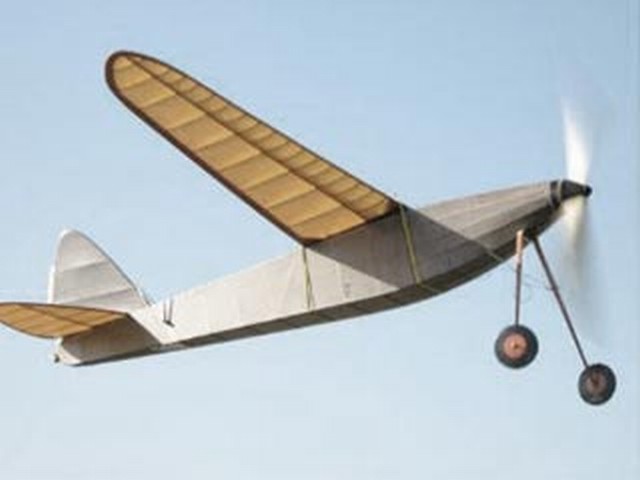 The photo of the completed Judge Wakefield model was found online here at http://www.oldwakefields.com/23621.html
SteveWMD - 17/01/2013
Add a comment