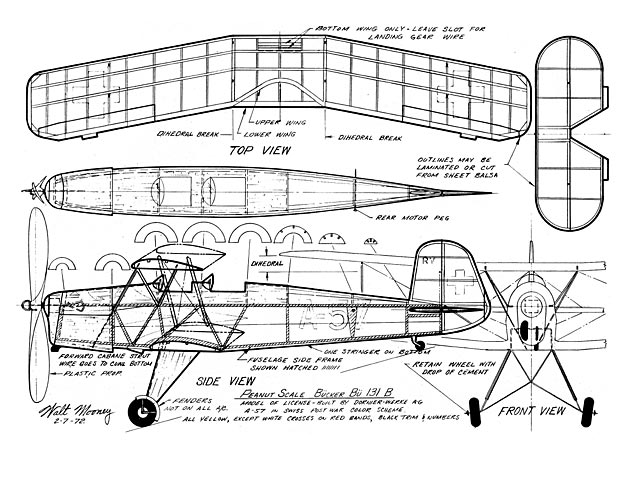 What would you call a small model of a German biplane trainer? How about 'A Peanut Bucker Sandwich?' If you can get past that without becoming ill, read on and find out how Walt built this little beauty.

This is a Peanut Scale model of the Bucker BO 131 B J ungmann, the fa-mous German primary trainer for most of the German pilots that later flew the fighters and bombers in the Second World War. Profile Publication Number 222 has provided the data and the three-views necessary to design this mod-el which is a model of a Backer Bu 131 B numbered A-57, which was license-built by Dornier-Werke AG in Switzerland. It has the standard color scheme applied to all Swiss military BEI 131's after WW II. In fact, this color scheme was the single item that inspired the model. The base color is yellow, with white crosses on red bands on the top and bottom of the wings and on either side of the red rudder. It has a black fuselage stripe and black numbers on the fuselage.

The aerodynamic setup of the Jungmann is very good for a rubber powered model with its long nose and ample tail length. In addition, the two wings result in quite a bit of wing area within the 13 inch span limits of the Peanut rules.

The prototype model uses a Williams Brothers propeller and small nose plug. It uses hardwood wheels manufactured by Marlowe engineering, and a simple straight pin for the rear motor peg. It uses one thirty-second diameter piano wire for the landing gear, the propeller hook and the fore and aft cabane struts. The strut fairings, and the interplane struts are made of one sixty-fourth plywood (doubled for one thirty-second thickness in the case of the interplane struts). All the rest of the structure is balsa wood.

The fuselage is constructed in the traditional fashion, with two sides built over the plan, assembled into a box sith cross braces and formers, and then 1/32 sheet balsa cockpit combing, stringers, and cowl panels of thicker sheet..." 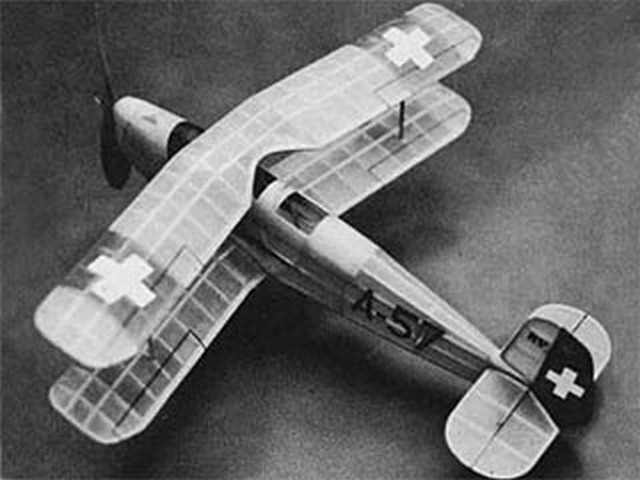