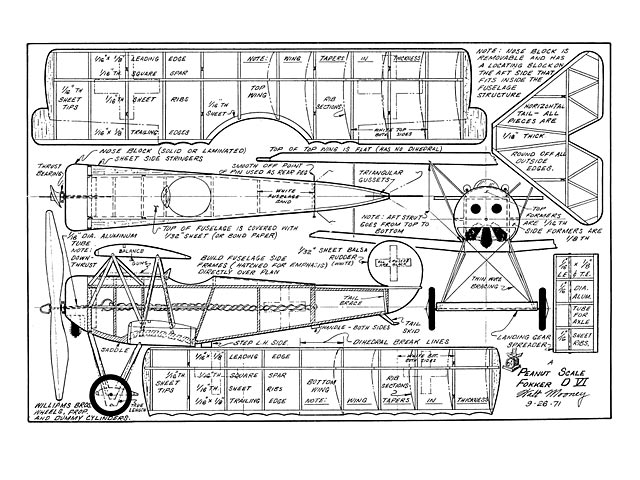 Quote: "Fokker D-VI, by Walt Mooney. Another tiny gem from the 'Peanut Vendor' This time, a little known fighter from WWI that, like many other's since, just missed becoming famous. One sheet of 1/16 by 3 by 36 will do it!

This is a model of one of the less well known WWI Fokker fighters. The D VI was built in rather small numbers and was used only a little in front line fighter units, and only a little more in fighter pilot training units. The success of the D VII over shadowed the D VI although the D VI was actually the faster of the two and a very maneuverable airplane also.

I picked the D VI as a Peanut Scale subject because I have never seen it modeled before and it makes an airplane that is obviously a Fokker. It's not so common that modelers will ignore it because they have seen so many before.

Information, a photograph, and a good three-view of the D VI are to be found on pages 102, 103, and 104, of 'German Aircraft of the First World War' by Peter Gray and Owen Thetford. Published by Putnam and Company Limited 1962. The only fault I can find with the information is the fact that the text says the tail was braced with a steel strut and the three-view doesn't show one. However the fuselage and tail of the D VI were similar to those of the Dr I triplane and it's tail brace is shown in the previous section in the book.

The only intentional deviation from true scale is in the wing dihedral. I added dihedral to the lower wing as shown in the plans. The upper wing has scale dihedral, ie there is none on the upper surface of the wing. Worthy of note is the fact that both wings taper in thickness so that the bottom surface of the top wing has a slight amount of dihedral as on the full size aircraft.

Indoors my model flew right off the board with a motor consisting of a single loop of 3/32 flat rubber. It would ROG and fly in left hand circles about 2/3 the width of a basketball court. Outdoors with 1/8 flat rubber it would stall and
then spin (a beautiful perfect 1-1/2 turn tailspin) and pull out quite low. This sooner or later results in a spin in, clear to the ground, so a little down-thrust was used to cure the stall. This is shown built in on the plans and does not seem to affect the indoor flying characteristics.

The construction used on this model is very much the old standard system. The basic structure is all balsa. If a builder felt it worth the effort to strip his own sticks from sheet balsa, a single sheet of 3 by 36 by 1/16 in thick balsa would be enough structural material. This would require the modeler to laminate the thick nose block, etc. and to sand down the wood for the rudder and top decking, but it could be done. The model shown in the pictures used block balsa for the nose, 1/32 sheet for the rudder and the fuselage top covering.

It also has all its struts cut from 1/64 plywood (available from Sig) with the landing gear struts doubled for strength. The wheels, propeller, and engine cy-linders are plastic, manufactured by Williams Brothers, and should be avail-able at your local model shop. A few inches of 1/16th diameter aluminum tubing and a short length of 1/32 wire are the other major material items for the basic structure. Japanese tissue is used to cover the model.

The wings, tail and the landing gear spreader are built directly over the plans. Just cut the ribs and the tips and the center cutout from 1/16 sheet and assemble the parts. Leave the wing spars off until the structures have been re-moved from the board so the proper dihedral angle can be built into the bottom wing. The top wing spar is flat.

Build the fuselage sides over the plans. The lower wing saddle is made from sheet balsa to eliminate the problems of bending a stick to match the curve of the front bottom of the fuselage. Remove the sides from the plans and note the curve of the back end of the fuselage in the top view. To obtain this curve the two sides must be cemented together at the tailpost first and a triangular gusset cemented in place top and bottom. This should be allowed to dry thoroughly before going on to add the cross pieces that complete the fuse-lage box. Five top formers are required to support the top decking. They are not shown individually, but see the front view for their shape.

Sheet side stringers are required at the nose of the body, these extend from the two side nose formers to the upright just aft of the cockpit.

Round the surface leading edges and taper the trailing edges and generally sand the structure smooth with fine sandpaper before covering. The model shown is red, white, and black. Probably no real D VI was covered or colored in such fashion but this model was built for fun. The white tissue was put in place first in just the areas that were later to have the black crosses. Then the rest of the model was covered with the red tissue. Water shrink the tissue and dope the surfaces with a single coat of thin dope and the fuselage with two coats. A black felt pen was used to color all the struts and a red felt pen was used to color the cowl.

The true shape of the landing gear struts is indicated by the phantom lines in the side view and the wing N struts are shown correctly in the side view also. Note the points at the ends which are inserted into the wing ribs as indicated. The positions of the strut ends are indicated on the plans by little X marks. Before assembling any of the surfaces onto the fuselage, locate these points, and in the case of the wings, insert the point of a knife to provide a hole location for the strut ends. Note that these are on the bottom of the top wing and the top of the bottom wing.

Put a short length of aluminum tube in each of the Williams wheels as a bushing. Cut an axle to length from 1/32nd wire. Slip it through the cross tube and slip a wheel on each end. Secure the wheel to the wire with cement or epoxy, making sure not to get any in the cross tube. By doing this, both wheels are part of a single unit and are forced to rotate at the same rate, thus reducing the natural tendancy of the model to ground loop.

Add the tailskid and the propeller installation. The propeller on the model shown was cut down slightly and the edges straightened somewhat to make it look more like a scale propeller, but more duration would be available with the larger propeller area.

Add details as you desire, such as handles, steps, machine guns, windshields, and instruments. The crosses are cut from black tissue and lightly doped in place.

I doubt if the Red Baron did much flying in the D VI but this model will take care of any Peanut Scale Snoopy that shows up on the model field." 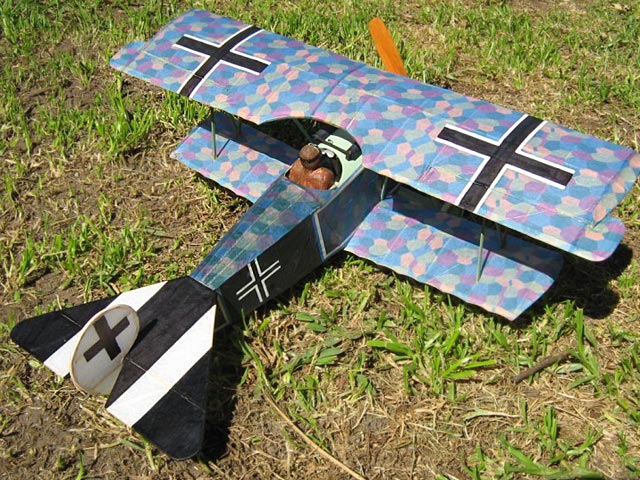