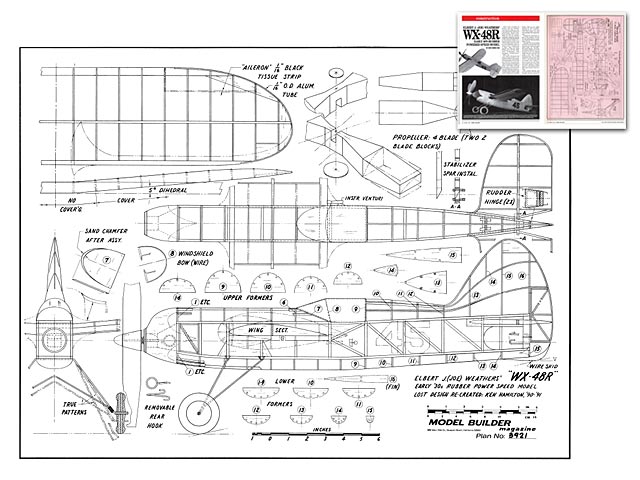 Many of you, no doubt, are familiar with Joe Weather's scale-like free flight gas powered model airplane designs, the controversial Mystery Man (oz4606) being perhaps best known. While the late Joe Weathers steadfastly maintained that this model simply left its takeoff dolly on the ground, landing on a partially-exposed single wheel in the fuselage, there were others who insisted the model was illegal in that it 'dropped parts in flight.' Other well-known original free flight gas model designs by Joe are the Westerner (oz959), Pacificoaster (oz2283), Miss San Diego (oz3569), Winged Victory (oz5317), Tubby, etc.

But before becoming San Diego's first gas modeler. a distributor for the ELF gas engines, and participating in the founding of the still very active San Diego Aeroneers model airplane club, Joe produced a number of glider and rubber-powered model designs, several of which were published. Jim Alaback, a member of the Aeroneers club, compiled a history of Joe's model career, finding over a hundred designs, both gas and rubber powered as well as gliders, originated by Joe. A few were scale flying models, but most were beautiful and original designs.

Through the nominating efforts of Jim Alaback, Joe has become posthumously a member of both the AMA and NFFS Halls of Fame.

The April 1935 issueof Model Airplane News had a photo and description of a rubber-powered speed model, the 'WX-48R,' one of ]oe's designs. The writer immediately obtained a print of the plans for this racy looking model from Joe, and built the model. It flew well, but was totalled in January '36, in a flight intended to show Joe how well it flew. A few extra turns than ever before were cranked in, and you know the rest! These early contacts led to visits back and forth, attending contests together, and eventually to Joe's older sister and the writer marrying!

Joe's original drawing, and the writer's print of it, have long vanished. Having a special interest in the design, and five photos of Joe's and his models, and knowing the span, the writer has recreated the design, presented here. A replica of Joe's model was built by the writer, soon to be on display by the San Diego Aerospace Museum as part of its new History of Model Aviation Museum. The model is being displayed in two capacities: typical of the then popular rubber-powered speed model type, and as an example of Joe's early modeling.

The plan presented here exactly duplicates Joe's original structure, and very closely duplicates his model's configuration and finish. Construction is standard in many ways, thus in the interest of brevity, only the unique aspects will be touched on in the following paragraphs.

Structure is all balsa, and sizes may be scaled from the drawing. For reference, the stringers are 1/16 x 1/8-inch strips, formers are 1/16-inch sheet, as are wing and stabilizer ribs, and the basic fuselage box structure is of 1/8-inch square strip.

The four-bladed propeller is actually two two-bladed propellers assembled as shown, the blocks carved and the propeller balanced after assembly. Small blocks of balsa fitted between the blades are shaped to form part of the spinner. The fin, fairing into the top fuselage deck cockpit fairing, Originally utilized I/16-inch aluminum wire for its outline and two sharply bent short pieces, one each side of center, between formers 12 and 13. Soaking the stringers (ammonia works well) will permit them to follow the curves shown on the tin.

The writer substituted readily available 1/16-inch OD aluminum tubing for the once easily obtained aluminum wire Joe used for wingtips, the horizontal stabilizer and vertical fin outlines. It is easily formed to match the drawing, looks the sarne, and is lighter!

The landing gear is of 1/16-inch diameter music wire ioined by wrapping with fine wire and soldering as shown. Wire struts are secured to the lower longerons with strong thread and cement. If the 2-1/4 inch diameter wheels are made, it is suggested they be laminated with grains crossed, then carved and sanded to the indicated cross section. Bushings of 1/16-inch ID aluminum tubing can be installed, with the ends flared and flattened. Soaking thin cyanoacrylate cement into the laminations attheaxle hole will strengthen the wheels. Similarly, allowing thin cyanoacrylate to soak into the 1/16-inch balsa sheet formers before notching them for the stringers, will help eliminate breakage.

Note the strong wing spar, full depth, cut from a straight strip of 1/8-inch balsa sheets, the dihedral break being made by slicing the strip at a long five degree cut, then cementing the resulting two pieces to the center section of the spar.

Two identical horizontal stabilizer halves are made, the ribs being sanded to a streamlined shape after assembly. The spar is left long; bevel the ends as shown. The spars are inserted into the fuselage so that the bevel cut surfaces meet and are cemented in place.

Joe used a removable rear hook, attaching an extended winder hook to it and stretching the rubber motor out the rear to wind. As the wound motor was brought in, the removable rear hook was secured to the small fixed hook in the rear fuselage. You must remember that no one had ever heard of a winding tube, or stretching a braided long rubber motor out the front to crank in many turns at minimum risk to the fuselage in the event of motor breakage. While the drawing shows the original setup, you may wish to modernize the rubber motor installation to permit front winding. and use a winding tube inserted throughthe noseblockopening. While this rugged model was neverintendedtoachievemuch duration, the performance of the replica can beextended beyond that possible with the original configuration by using a long, braided motor.

While Joe used a cellulose type model cement to attach the windshield and canopy, I suggest you use Wilhold RC-56 glue, which dries transparent, stays flexible and does a neat job. This is what I used on the replica model, a very thin bead of the glue being laid along the joint between the windshield and canopy. Paper templates should be developed on the model and the transparencies then cut from these.

Joe covered the model with medium weight tissues, water shrunk. l applied the tissue damp, permitting the tissue to adapt to gentle compound curves without wrinkling. The severe compound curves of the fin may be covered wrinkle-free by fitting separate pieces of tissue to each opening bounded by formers and stringers. Joe clear doped his model, applied black tissue '45' on each side of the fuselage, and strips to simulate aileron and elevator outlines.

Small areas of opaque color dope (believed to have been bright red) were applied to the fuselage nose and tail, and to the wing leading edge, extending partially around the tips and on the inboard end onto the fillet area. The wing root fillet, incidentally, is easily made by cementing formers from the already covered fuselage upper deck across the uncovered wing section to the inboard side of the first rib outboard of the fuselage. A typical former is shown. These formers are best fitted on the assembled model. As in the case of the fin the fillet is easily covered smoothly by fitting individual small pieces of tissue to each opening, water shrinking, and clear doping when dry. If a tissue piece dries with a wrinkle on either the fin or fillet, do not hesitate to remove it and try another with a different grain direction until a smooth, wrinkle-free area is obtained. The results are worth it.

Both Joe's original and the writer's first model flew well without side or downthrust. Here in Southern California the traditional tall grass field for first flights is a legendary thing. In fact, any field is becoming scarce. But at least this model does not create a noise problem, thus being flyable in nearby built-up areas. Following the initial glide trimming, power flights should start with low power and winds, gradually increasing these until the desired performance is obtained.

One last suggestion: Joe's original model did not have a freewheeling propeller, as the plan shows. The writer's replica model has a simple freewheeler hidden inside a vacuum-formed spinner nose. You may wish to make the same change.

As l did, have fun building this model from an earlier era. You will be rewarded by having an attention getting racy model, and by its being a tribute to the modeling skills of the late Joe Weathers." 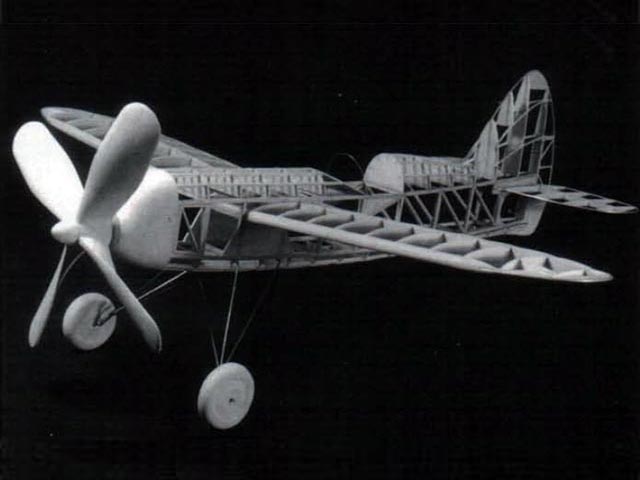