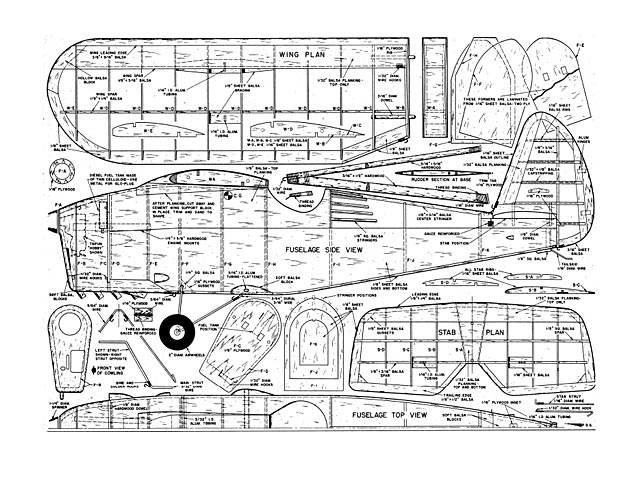 Quote: "If a real plane ever existed that makes a more beautiful, better flying model than the Swift, we've yet to hear about it. For Half A engines. Comper Swift, by Hoh Fang-Chiun.

Free flight scale probably is the most 'touchy' branch of aeromodeling, for 'competition models of this type must be light in structure, yet having good aero-In model form the chunky Swift looks far bigger dummy pilot's head with a strip of colored silk dynamic character. Consequently, they usually are weaker than most other types of models and may be damaged if incautiously handled.

The Comper Swift was not designed to be a hot contest ship that will bring home many trophies but rather as a robust fly-for-fun sports model that will last for years of enjoyable week-end flying. In designing the model, therefore, attention has been concentrated on producing a durable and easy-to-transport plane.

To solve the transportation problem most parts of the model are made detachable and hooks, tubing, and rubber bands are used for this purpose in the design. It is possible to put the model into an ordinary handbag, as even the landing-gear can be detached from the fuselage. The model is accurate except for tail areas, which are slightly enlarged, and the added dihedral, which is indicated by the wing struts. These departures from scale were found necessary in order to make the model fly well with the least sacrifice of scale appearance.

An interesting feature is the shock-absorbing landing-gear. As can be seen on the plan, it is of a simple yet effective construction. It worked very well on the original model. My model had a German Taifun Hobby .06 diesel and this engine provided more than enough power, but any other engine with a capacity of .049 - .075 cu in displacement will do the job.

Construction. First, cut all the balsa formers. Note that FD-FH are from 1/16 in laminated sheet. This is due to the pressure on these formers when the fuselage sides, which are cut from 1/8 in medium sheet, joint at FD. To save weight, lightening holes can be cut on them. Now cement FG and FH to fuselage sides. When dry, the remaining formers can be cemented in place..." 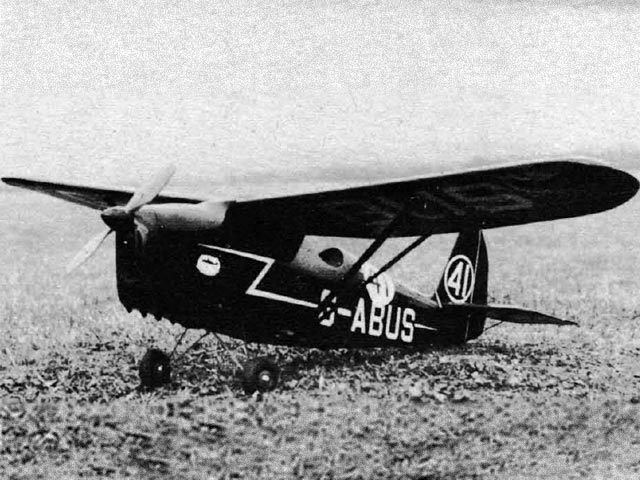