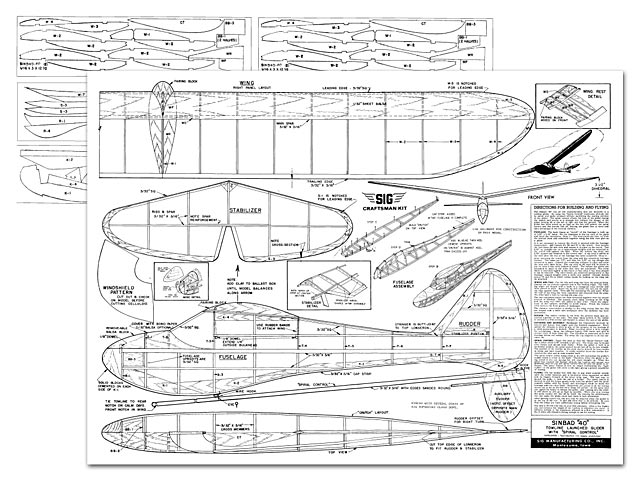 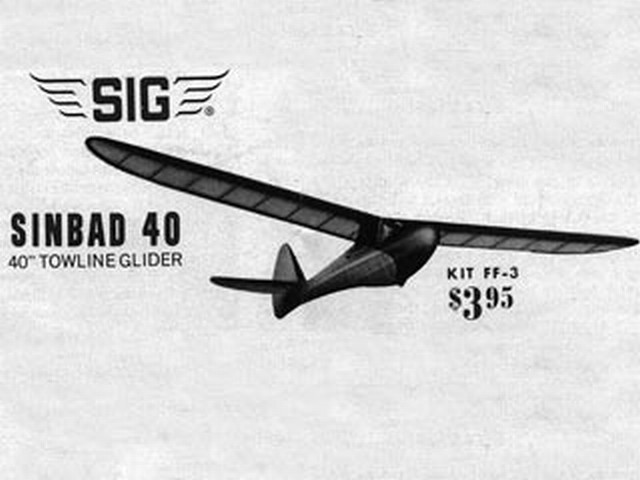 This was originally a Berkeley kit. The AMA plans listing says it's from 1945.
For me, anyway, this is a challenging build. In the kit I'm using, from Sig, R-2 and R-3 didn't seem to be anywhere. However, there was an unmarked sheet of wood. The die cutting wasn't noticeable at first, but there was a single piece to substitute for R-2 and R-3.
It may be a good idea to put diagonal bracing in the crutch. At some point the crutch on mine developed a slight bend.
The top view shows wing sheeting, but the ribs aren't cut for it. It would probably be just fine with no sheeting, though in that case I'd suggest hard balsa for the top spar. I will probably cut my own ribs.
I may have more suggestions later.
Lincoln - 01/01/2021
I built a Sinbad 40 about 1958 or so, took a lot of my paper route money to get it finished. I admit I didn't do a very good job on the crappy Berkeley kit, my first try at using silkspan. I followed the directions for covering, didn't do very well, later I found out using wet silkspan worked a lot better. I didn't understand about clear dope, and so my Sinbad received just one coat of green dope, on sale at Scarborough Drugs in the "non fuel proof" bin. During the coupla weeks it took me to assemble the kit, I was yelled at by teachers as I daydreamed about my Sinbad's flight future. Actual performance was somewhat lacking. It did glide very well from a hand toss, once I got the C/G in place. With help from my younger brother, I attempted the recommended towline launch. You were supposed to adjust rudder trim for a gentle left turn, and then attach the sub fin with opposite rudder to make it tow straight, never worked right for me. Looking at the plans today, I realize the towline was attached waaaay too far forward for a stable tow, which caused my Sinbad to weave back and forth as I ran forward, following a rare smooth launch from my brother's hand. I could make it fly today with radio and an adjustable hook just forward of the C/G, all a great mystery back then. My only success at that time was an old fishing reel strapped to a foot of bamboo, useful in future more flight worthy gliders.
doug smith - 01/01/2021
Add a comment