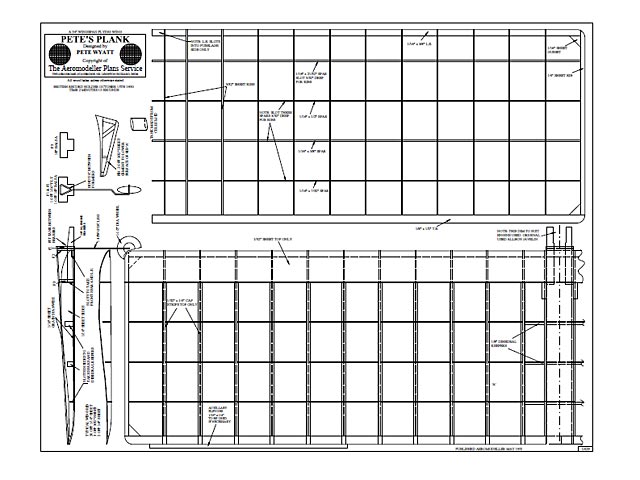 The very first model that Peter Wyatt built and flew successfully was the tailless RFLG 53. There is little doubt that this has given him a good start in aeromodelling, for as current holder of the British record for powered tailless models, and always a leading competitor at power duration contests, Peter Wyatt has become an established expert.

Pete’s Plank is the ninth of a series. It established the British record of 2 mins 15 secs on the 15th October 1950, at his home town, Ipswich. Earlier versions have exceeded 4 mins on 30 seconds motor run, and could easily have been used to try and beat the world’s record which allows unlimited motor runs. However, Pete sees little point in such an effort, and is content with this very high performance ninth design.

Incorporating a very novel and necessary DT, we recommend this design to all tailless enthusiasts as an experiment guaranteed to be successful. Note the absence of sweep-back, and the diminutive elevons. What could be simpler?

Building Instructions: Shape 1/16 ply template and cut 20x 1/16 ribs, 4x 3/32 ribs from medium balsa and 2x 1/4 in ribs from soft balsa. Pin together and sand to shape. Notch for spars, noting that slots are not as deep as spars.

The original plane was covered in heavy Modelspan. After doping, give fuselage, and wing as far as the fins, a coat of banana oil to keep out diesel fuel. Fuselage can be finished off with a Mercury cockpit cover if required. The engine bearers can be carved to suit the engine. The original had an inverted Javelin 1.49 cc diesel with home-made tank formed from a piece of sheet celluloid. The ED Bee would also be an ideal power unit.

The fins are added after the wings are covered. They do not tend to get damaged, as the plane turns over in a bad landing.

Trimming: The required downthrust is approximately as shown. No sidethrust was found to be necessary. The plank will very likely be found to be nose heavy and trim is produced by using auxiliary elevons as shown. First fights were made with the engine throttled down; but a reversed prop could have been used. It is better to ROG than hand launch, since on low power there is a tendency for the plank to drop from the hand. A slight left turn on power and glide is safe, there being a tendency to spiral dive to the right.

Note: Do not have any hinged trimming tabs which can move unnoticed. All tabs should be well cemented before flying." 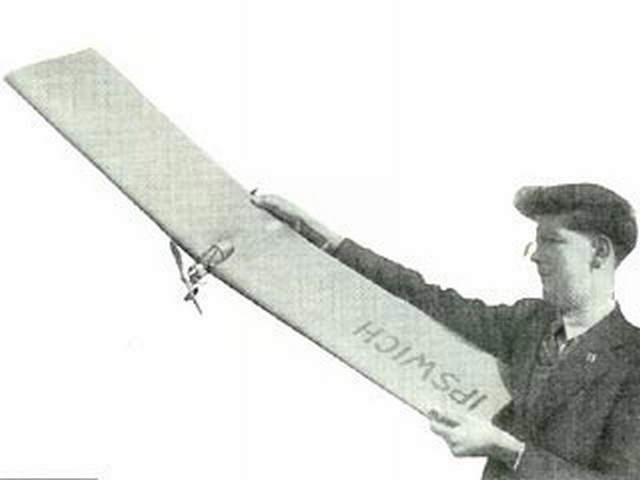