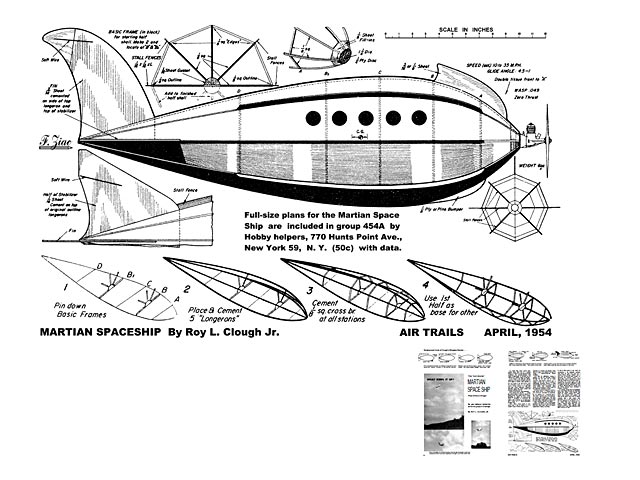 Quote: "It looks like some weird antigravity space ship out of a science fiction TV show as it buzzes buoyantly overhead, its torpedo-shaped hull rising mysteriously up through the air without any visible means of support.

If we tinker a bit with the adjustments we can send it zipping along in level flight at terrific scale speeds, or we can make it all but hover with its projectile nose at a 50 degree angle. Under power it is both stall and spin proof, assuming whatever climbing angle the power output and elevator settings call for.

When power stops, what happens? Now there's the payoff - when the engine stops it does not plunge. It drifts slowly and gently back to earth, alighting so easily we have never found it necessary to embellish the design with anything so old-fashioned and crude as a shock-absorbing landing gear.

Okay then, what holds it up? There isn't a bit of helium in it. It doesn't need a lifting gas anyway, because it is purely and simply, from stem to stern, and despite its lack of wings, a heavier-than-air flying machine.

And that, by definition, means it obtains its lift by forward motion through the air, and not by some amazing anti-gravity device. As a matter of fact the way it works is sufficiently amazing anyway: it flies unsupported by wings or rotors, yet is more stable than machines using either, and manages to retain many of the desirable qualities of each.

We have always wanted to build a free flight blimp. A lighter-than-air job, however, wouldn't be practical. So we started on a 'heavier-than.' The basic section was symmetrical, of course, but swelled up a bit from the usual stunt model section. We used the half shell construction method and it went together quickly and easily.

After completing the experiments sketched out above we had something that flew quite well - but it no longer resembled a blimp, and then it was at this point in our work we recognized, a bit belatedly perhaps, that what we had here was not a model blimp flying 'static' but a new type of aircraft that closely resembled the popular notion of a space ship. And it turned out in line with the dynamics of the thing that rearranging the power-plant and tail surfaces for maximum efficiency made it resemble almost perfectly the type of flying dingbat that the people who see flying saucers have reported a number of times.

An ancient Wasp flew it beautifully from level flight through all climbing angles the engine could handle, and when the power stopped the driftdown was steady and gentle. Its ideal glide angle does not, of course, compare with a high aspect ratio sailplane and is not intended to. It can be adjusted to do about 4.5 to 1 at a fairly fast rate. Personally we prefer a sharper angle with very low forward speed. This permits long engine runs to very high altitudes with little chance of loss." 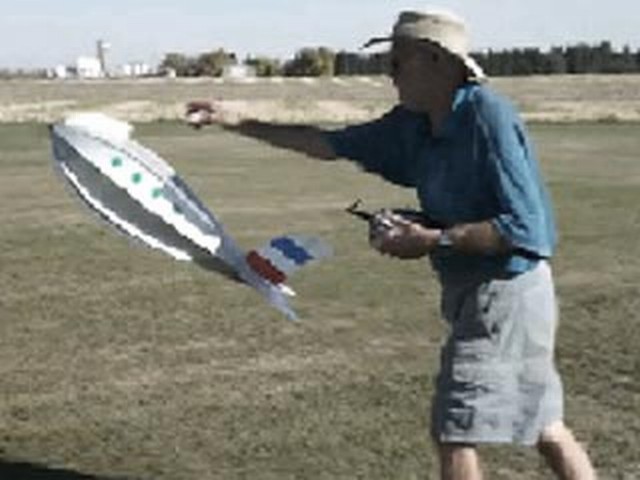