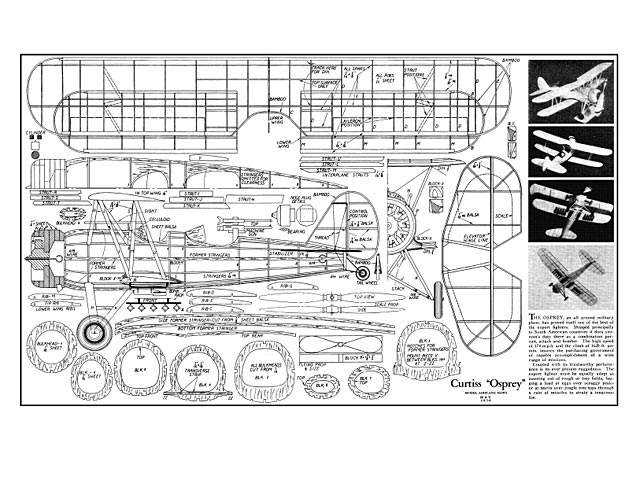 Quote: "THE OSPREY, an all around military plane, has proved itself one of the best of the export fighters. Shipped principally to South American countries it does yeoman's duty there as a combination pursuit, attack and bomber. The high speed of 174 mph and the climb of 1620 ft per min insures the purchasing government of capable accomplishment of a wide range of missions.

Coupled with its trustworthy performance is its ever present ruggedness. The export fighter must be equally adept at zooming out of rough or tiny fields, lugging a load of eggs over scraggy peaks or at tearin over jungle tree tops through a rain of missiles to strafe a tenacious foe.

The constructional method employed on our Osprey is as fool-proof as possible. By cutting the four main stringers from sheet balsa, to a patterned shape eliminates all that is undesirable in the building of a bulkheaded fuselage. Not only is the fuselage interesting to construct in this manner but it necessarily must be true. The weight increase is negligible, the finished plane weighing approximately the same as one of conventional build and less than others of a special technique. The strength of the finished Osprey will be evident when it starts to take punishment.

In flight this little ship is a revelation. The model is not a fragile floater but a well balanced, snappy imitation of its prototype. Like its big brother, it needs to ask no quarter when it comes to flyability.

Fuselage Using the patterns given, cut the former stringers from a medium piece of 1/8 sheet balsa. The bulkheads are cut from 1/16 sheet. Cement the side stringers in place on two of the widest bulkheads and allow to dry. Place the remaining bulkheads in position between the same two stringers.

Locate the top stringers and the bottom stringers after checking the frame for alignment. The auxiliary stringers of 1/16 sq. stock are cemented in place. In making the original, the notches for these stringers were cut as the work progressed, their positions having been marked in pencil.

The rudder post of 1/8 sq is inserted and glued in place. The hook of .028 wire is bent and sunk in the rudder post. The cockpits are made by bending 1/32 sheet balsa. The sheet is at first glued in position. After the cement has set, mark the outline of the cockpits and cut out with a sliver of a razor blade.

Cut two pieces of sheet balsa the patterns for which are marked V and insert between the fillet extensions of No.3 and No.4 bulkheads. The points mentioned are marked Z and ZZ on the bulkhead sheet..." 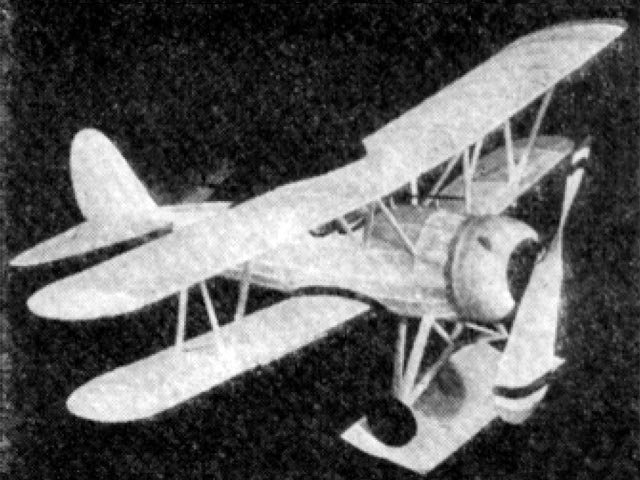