Quote: "A simple boxcar for club field sport flying that will appeal to all modellers Imp, by T King.

THE IMP was created with small field flying in mind, as the designer's club (The Impington Village College MAC) has only a small playing-field surrounded by large trees - typical of many clubs throughout the country. Most evening's flying end up with a tree climbing adventure alright for the youngsters, but it gets harder as you get older!

With the arrival of cheaper single channel radio it meant the average club member could afford to control his model to some extent, and a glider offers the perfect entry into R/C flying.

IMP No. 1 was built in the summer of 1967. What a delight it was to be able to turn away from trees, which before had greedily swallowed up one's model! Using a Hi-Start launch to take the model up to about 250 ft, a flight of one to two minutes seems quite a long time in a small field. Being enthused with the performance, 'IMP' No. 2 was built for Ray Malmstrom (founder member of the club) as an introduction to R/C.

The first flight was made one evening in the summer of 1968 with Ray at the control. The model was stretched back on the Hi-Start. At a signal from Ray the model was released. It rapidly gained height, with a few minor rudder corrections. After a clean release at the top, Ray proceeded to do a few circuits of the field. Apart from over-correcting once or twice, he had made his first R/C flight without mishap. Had it been a powered aircraft, those one or two over-corrections might have spelt disaster.

Although flights of only one or two minutes in a small field have been mentioned, in more open space with a higher launch flights of five minutes and over have been enjoyed.

Quote: "Another Single Channel 48in span glider for you. The plan scan was very kindly scanned by Algy2 at my request as I am seriously looking at building one. The Imp's main claim to fame is that it was the model used by Ray Malmstrom for his first attempt at radio control. He is pictured within the article. I should also add that it was also Ray Malmstroms last attempt at radio control, as he considered it as un-natural." 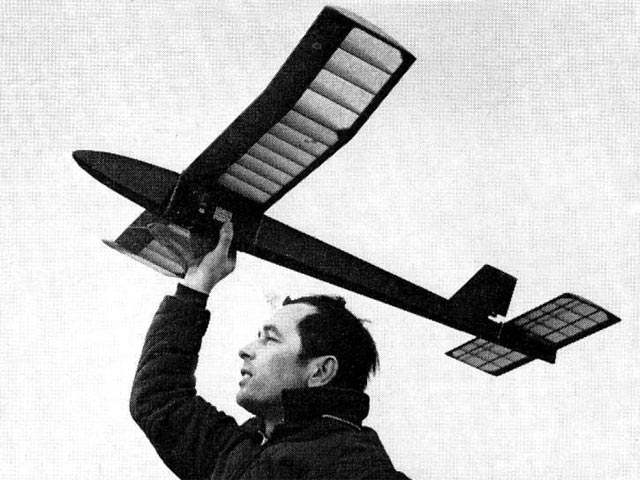