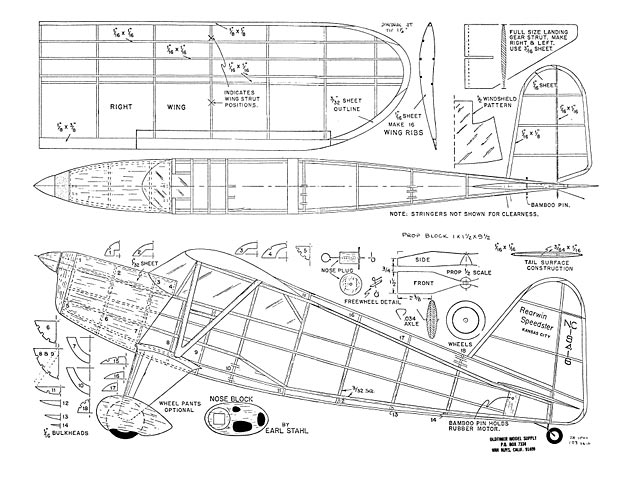 Quote: "At Last! The perfect flying scale model - realistic in appearance, a fine flier and easy to Build. Rearwin Speedster, by Earl Stahl.

THE Rearwin Speedster is designed to answer the demand for a fast two-place cabin monoplane combining exceptional speed with outstanding appearance. And the Speedster is indeed a masterpiece! Its perfected design combines speed and streamlining with comfort, safety and ease of flying.

Powered by a 125 horsepower Menasco engine, the Speedster zips along at a maximum speed of 150 mph. The nonstop range, at 130 mph cruising speed, is 550 miles; while the landing speed is a comparatively slow 48 mph. Economy of operation is an additional feature, for the Rearwin Speedster averages almost 17 miles per gallon of gas - eloquent testimony of its efficiency.

Unlike most modern planes this one is a near-perfect subject for a flying scale model. Its trim, slim fuselage with a high line of thrust and low center of lateral area lends itself admirably to model construction; the long fuselage aids flight stability and permits the use of a powerful motor of considerable length. Comparatively large tail surfaces combined with a rather small wing area further improve the possibility of fine flights. In short here is a fine scale model capable of making long stable flights despite the fact that it has been accurately reproduced.

The author has built three of these models and they have won awards not only in flying contests, but also when judged as scale models. Timed flights of one and one half minutes have been made; a fast climb which carries the plane high into the air combined with a long smooth glide making such flights possible. Why not build a Rearwin Speedster for that flying scale contest? Following is the recommended procedure of construction:

Fuselage: Once the plans are properly joined together, construction can be started. A rectangular frame is the backbone of the fuselage. Two sides are built from medium grade 3/32 square balsa, one atop the other to insure identity. When dry, the sides are inverted over the top view; pinned into position. Then cement the 3/32 square crosspieces into place, being careful the whole structure is lined up properly. Cut the bulkheads, halves of which are shown on the plan, from 1/16 balsa, and now if the basic frame is dry it should be removed from the work board and the bulkheads cemented into place.

The wing center section, consisting of two wing ribs joined together, is built directly atop the plan and then it too is cemented into place. Doing this will insure the correct placement of the wing in final assembly. Note that most of the bulkheads lack notches for stringers, and when this is the case the 1/16 square stringers are glued directly atop the bulkhead. This method helps eliminate wavy stringers and aids in making a more perfect covering job. The stringers on the sides of the body are glued directly to the underframe.

The whole nose is covered with 1/32 soft sheet balsa. While this is not difficult it does require careful work. Start at the top, using three inch wide stock if possible, and cement the covering to the entire adjacent frame. Rubber bands wrapped about the sheet and plenty of pins will aid in holding the covering in position until dry. Additional wedge-shaped sheets with the grain running as indicated will be needed when the bottom is reached. Make neat joints where the individual sheets meet. A nose block is carved from a 1/2 thick block. Accurately cut the nose plug hole and then cement the block into position for final finishing.

Wing: Because of limited space only one-half of the wing could be reproduced on the plan; so make a full-sized layout on a large sheet of paper and work can be done directly on it. It should be noted here that the airfoil used on our model is not scale-those desiring an exact scale model should use an M-6 wing section. Taper and sand the trailing edges before pinning them into position over the plan. Wing ribs cut from medium grade 1/16 sheet should be pinned into their respective positions and the hard 1/16 square spars and 1/8 square leading edges added. Tilt the inner ribs of each panel slightly to insure a good fit when the dihedral is added. The small tip ribs are formed from larger ones by the cut and try method after the wing tips have been cemented into place..."

Quote: "Here is the Speedster from Earl Stahl which I got from Oldtimer Model Supply, by Ken Sykora, deceased. This version has the various formers needed for construction." 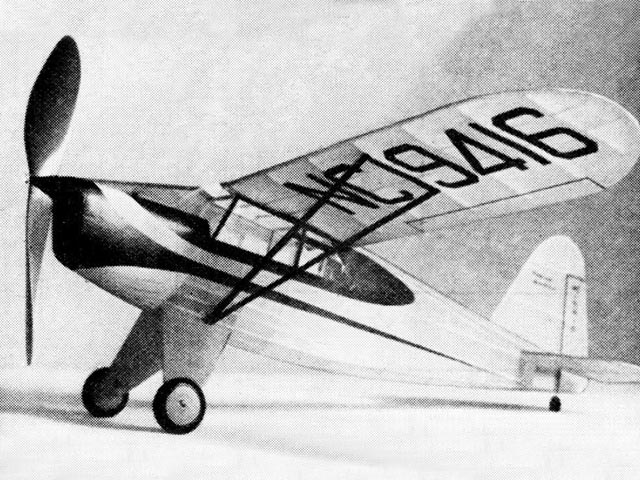 This plan also can be found at http://www.theplanpage.com/esp/rearwin.htm ...which also has full build article text.
SteveWMD - 31/12/2012
Add a comment