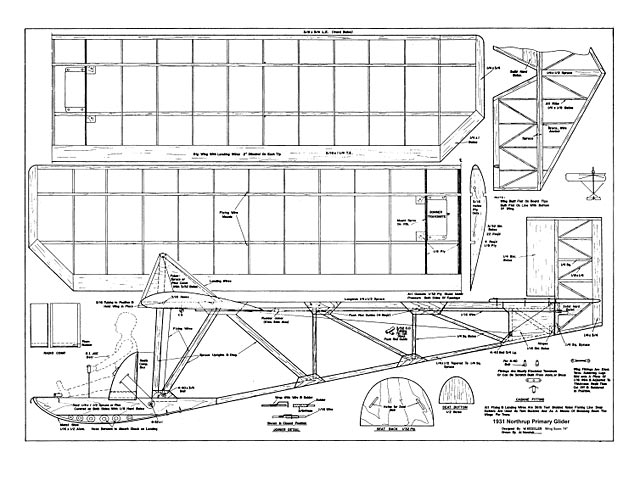 Did you ever see a real 'Primary' glider being launched? Quite a thrill, especially if you are part of the pro-ceedings. Unfortunately however, the famed old 'Primary Gliders' are as dead as the dinosaurs, and the only time you are likely to see one is in an old movie or the like.

I thought I should do something about it, a model replica for radio, sort of a tribute to a passing age of aviation. I located a three view of the full scale ship, and enlarged it to a suitable size for an old reed set that was gathering dust.

One slight problem immediately arose: who would believe such an aircraft, without a pilot up front. I looked about and found a very realistic toy doll - GI Joe. made by the Hasbrook Corp. I examined the various outfits that were available for it, and right then he was elected to fly the honey bird. These dolls are to a scale of 2 in equals 1 foot, which set the scale for the model. This came off the drawing board at a nice big, practical soaring size, 6 foot 2 in span.

For reasons of transportation, I worked out an easy way to break the model down, which in practice worked. out very nicely. All the wires that were a part of the real prototype, would be working on the model also, but they had to be able to be knocked down for transporting without a lot of trouble. After much thought, the system of rigging presented here was worked out, and it seems to do the job.

Don McGovern saw the ship at the field, and seemed impressed with its novel appearance and potential for radio slope and towline flying. The pilot up front on his precarious perch makes you really root for him somehow, and he lends the ship a human touch, to say the least.

I always try to design a model for ease of construction and I believe this model can be completed in about 20 hours work. (I'd be inclined to doubt it, except Walt seems to build a new ship every week, so it must be so... the Editor) That's the amount of time I spent on this original, once I had the design set in my mind. For a trip back in time and the fun to be had, here is how we will start:

The Elevators: Start with the eleva-tor surfaces. The majority of this is constructed of 1/4 in square balsa and 1/8 x 1/4 in balsa. A couple of pieces of spruce (or pine) are employed for the main spar. I believe in strength here, but at the same time, try to keep the tail assembly as light as possible. Sand the leading edge and tips round and put a sort of taper on the trailing edge. The rest of the elevator is flat. When the elevator is dry, remove it from the board. Sand it smooth and give it a couple of coats of dope. Install the wire brace eyes that are made from a pair of soldering lugs, soldered together on the larger ends.

Rudder: Simple in construction, and here again, a spruce spar is employed. Balsa just won't stand up to the windy blows the weatherman dishes out here on Long Island. Rounding off the lead-ing edge, top and bottom of the rudder, and taper the trailing edge. Dope the structure at least twice and set aside to cure. I didn't use a fitting on the rudder strong enough to break the two outrigger brace wires, (36 lb. test braided nylon) but it survived a crash with only minor damages.

The Fuselage: The top stringer of the fuselage is 1/4 x 1/2 in spruce or pine, while the lower stringer is 1/4 x 1/2 in tapered to 1/4 in sq. I may as well mention the fact right now that as long as you are building this model you may as well get an X-Acto saw or a Zona saw. They are ideal when it comes to working with hardwoods as on this airframe.

The nose skid is made from a piece of 1/4 x 1-1/2 in spruce or pine. The first upright goes right up to the top of the pylon for the added strength. The top stringer butts against the first upright and should be given a good glue job..." 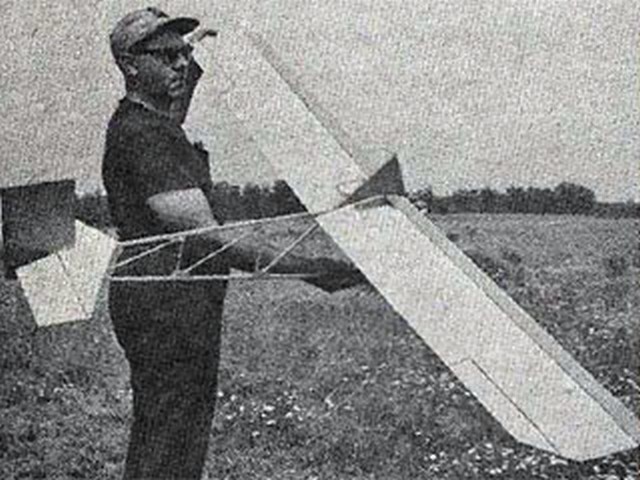 Attached are pics of my 1931 Northrop Primary Glider [more pics 003, 004].
JeffBreece - 22/07/2018
The pilot is G.I. Joe, who is roughly the right scale, and the receiver battery pack is in his chest with the wires running up through the hollow member just behind his seat. The receiver and servos are in the wing roots, receiver and aileron servo on one side, rudder and elevator servos on the other with the receiver antenna running through a nylon tube inside the wing leading edge and out one wing tip. The rudder and ailerons are coupled to deal with adverse yaw. Season's greetings and very best wishes. Thanks again for your wonderful work. Cheers!!
JeffBreece - 19/12/2018
The description of the flight controls states that the ailerons and rudder are connected, but no ailerons are shown on the plan.
ulpilot - 16/11/2021
Jeff's comments relate to the model Jeff built, which clearly does have ailerons. See photos.
SteveWMD - 16/11/2021
Add a comment