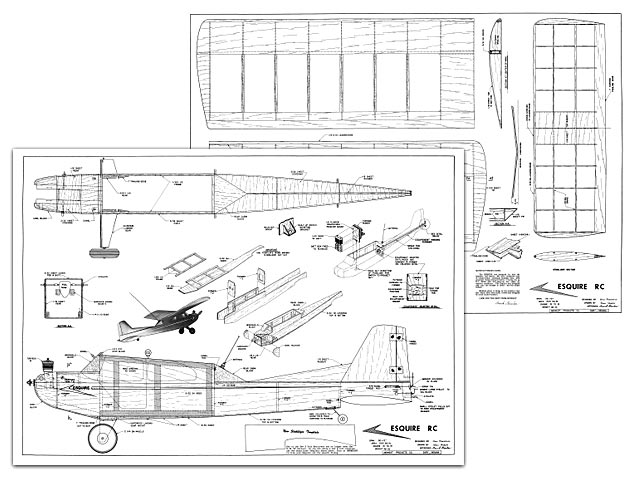 Quote: "The Esquire, by Ken Collins. We've made available to you plans for this exquisite example of the Golden Age of R/C. Originally kitted by Midwest, the Esquire flies great on a .10-size engine and single-channel proportional radio.

Modern day practitioners of the single-channel radio control art tend to become real windbags at the mere mention of names like Rudder Bug (oz7009), Trixter Beam (oz2864), or as in this case, the Esquire. With the exercise of restraint I will try to hold this to a few thousand words or less.

In a recent phone conversation with the editor of Model Builder he casually mentioned he had a set of Midwest Esquire plans that had been obtained from Frank Garcher. This news was followed by several minutes of pleading as I sought to obtain a copy of those hard to find plans of one of the all time greats from the golden age of radio control.

A week or so elapsed as I checked the mail box from two to twenty times per day for the arrival of Midwest's great contribution to R/C development. At last there they were. Three days and 20 or so building hours later a recreation of the Esquire returned in a blaze of glory to the skies over America. As an event it almost parallels the rebirth of the rejuvenated Statue of Liberty.

For those of you who wish to also recreate this R/C wonder of the early days let me say it is an airplane that is easy to build and fly. Excellent detailed instructions for building the airplane are printed on the plans which are now available from Model Builder Magazine plans service.

There are just a few comments I can make that will enhance your opportunity for success in building and flying this model. In those early days of R/C they had not yet learned the flight benefits of placing the angle on the wingtips at 30 degrees rather than some other less efficient angle so I highly recommend you make this change. I did and I liked it.

On the plans they show a new template for the stabilizer saddle that reduces the positive incidence in the wing's relationship to the stab angle to one degree. The explanation for the change is that less angular difference is required when using the newer lighter radios. Since my recreation came out probably as much as one pound or more lighter than a model built 30 years ago I followed the advice and used the new template. That was a mistake that cost me two hours of repair time fixing the fuselage where the landing gear was torn out when the airplane hit the ground in something a little more than a shallow dive immediately after launch.

The CG location on the plans did not work out well for me either. It is shown at something around the 50% chord point and my recreation likes it more at the 1/3-point from the leading edge.

With the benefit of those notes you can easily have great success with your first flight of the Esquire as a single-channel, rudder-only flyer. For those of you who may choose to fly it using two or three channels I predict you will have lots of fun fighting off your flying brethren as they seek to rip the transmitter from your hands and take their turn at the controls of a real fun flyer. For you I recommend the new stab position and the rearward CG per the plans.

The authority and responsibility for powering this Esquire was delegated to a new OS .10 FSR. Control was supplied by a single-channel Ace Radio pulse proportional radio pushed along with the electro-motive force of two AA Ni-Cds. Airplane, radio, and engine were a perfectly matched setup. Now if I could just locate a set of Rudder Bug plans!" 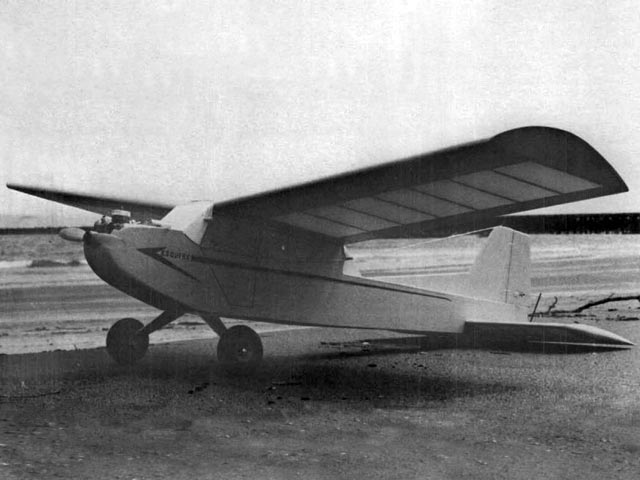 Model Builder magazine did a brief re-introduction of the Esquire, back in the 1980s. The kit plan shows a template for an alternative tailplane incidence angle that they recommended for models using lighter (by 1960s standards) R/C gear. The author of the magazine article tried this and he said it resulted in little more than a shallow dive after launch. He recommended using the original wing and tail incidence, and also said that his model flew best with the CG at 33% back from the wing leading edge. The engine he used was an OS .10 FSR, and the radio was an Ace pulse-proportional unit. My suggestion? Do a few test glides over the the proverbial tall grass.
Moeregaard - 05/02/2013
Steve/Mary, you might want to add pictures of my Esquire to your wonderful collection [we did! - more pics 003, 004]. Hundreds if not thousands of people over here in the US learned to fly R/C with the Esquire. It made a great free flight with intermittent radio interference with our old single channel radio sets. The Esquire gained a new life in the late '60s and early '70s with the advent of digital proportional radios. Remove some of the incidence in the stabilizer and add elevator and you had one of the best trainers available. My latest model of the Esquire is about 10 years old and flown on both glow and electric. I am adding spoilers to the wing for something else to play with.
JimHales - 06/06/2017
Add a comment