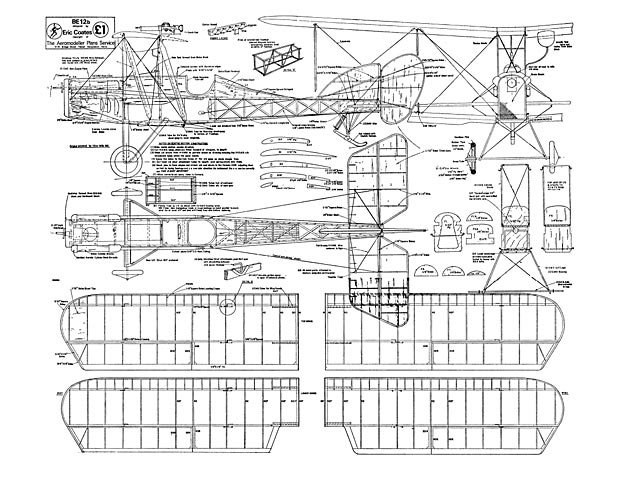 Quote: "THE BE.12b was the ultimate development of the remarkable BE.2 series of aeroplanes whose original design stretches back to before the commencement of the 1914-18 war. It is also just about the least known of the series, being produced in relatively small numbers as a home defence single-seat fighter to counter the Zeppelin raids. It was a proper hybrid. The wings were the equal-span four bay surfaces, used on the BE.2c, to which was married the smaller tailplane of the later BE.2e. The single-seat fuselage of the BE.12a was employed, but the RAF 4a engine was replaced by the 200 hp Hispano Suiza engine used to power the SE5a. So crude was the modification that the fuel tank used on the BE.12a, which possessed a dorsal wedge-shaped fairing to align with the air scoop, fitted between the cylinders of the RAF engine, was merely turned round; to reduce wind resistance presumably. It certainly could not have improved forward visibility!

Armament consisted of either a single or a pair of Lewis guns mounted above the centre section. All night fighters of this era had high mounted armament to prevent the nozzle flash blinding the pilot. In addition, bombs could be carried from racks beneath the wings - presumably to bomb airships; in the unlikely event of a BE managing to climb above one!

Irrespective as to how effective this mongrel mixture of components was as a night fighter, it certainly makes a very stable flight model for day time flying. All BE's from the 2c onward are stable subjects, but it is virtually impossible to completely hide a model engine effectively in any of the RAF-powered machines; however, almost any inverted engine can be hidden in the 12b. I used a 1947 vintage Mills Mk1 1.3 cc in mine which is the perfect power unit for this type of model with its long stroke ability to swing a large-scale diameter propeller and rear induction allowing easy choking and needle valve adjustment. Alternatively, if one of these old masterpieces is not to hand, one of the current production 1 - 1.5 cc diesels may be fitted. Unfortunately these are nearly all front induction engines, therefore arrangements will have to be made to choke them and the needle valve will have to protrude through the cowl sides. The engine is not mounted directly to the bearers but on a 10 swg light alloy plate in order to allow trimming adjustments to the thrust line to be made.

General construction is quite straightforward, and follows along the lines detailed in my recent Flying Scale Models series - in fact this model incorporates most of the features mentioned in this epistle. It is not, however, a model for the novice and potential builders should have previous experience of building such models - while it is regretted that back numbers of this magazine containing the aforementioned series are no longer available. For the benefit of builders who may not be familiar with my constructional methods, I will highlight one or two of the less common features.

Fuselage: The fuselage itself is rather more simple than the plan at first suggests - being composed of a simple box shape, spruce longerons forming the basic shape, with sheeted areas at the nose and a simple fairing behind the cockpit. The cross section aft of the cockpit becomes rather small, while the large tail imposes high torsional loads in heavy landings. so to overcome this, internal diagonal bracing laid 'diamond fashion' is fitted where shown to stiffen up the rear end. The front end is a most distinctive feature, and is bent from 22 swg aluminium plate in three pieces..."

Quote: "We go to the March 1973 issue of AEROMODELLER ...the first free flight plan and it’s a classic. One by the UK doyen of scale power free flight models ERIC COATES and his BE.12b scale World War 1 fighter. It is not mentioned in the construction article but I am sure that this is the model that enabled Eric to walk away with quite a few first places. While not one for the novice, building is quite straightforward and features trademark construction techniques that Eric evolved over the years. It’s a very stable model and easy to trim if you follow the advice given." 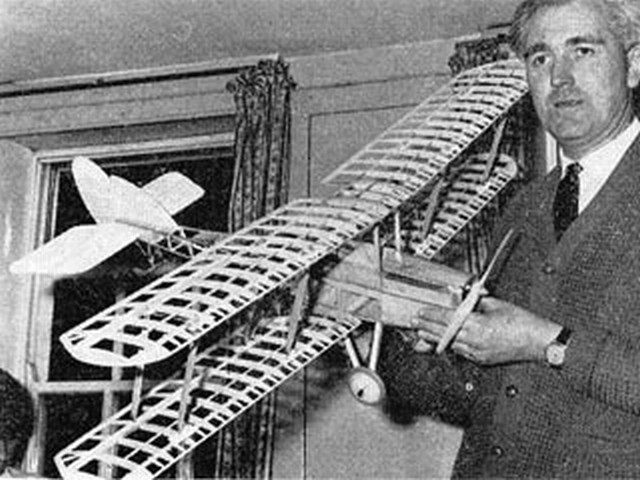