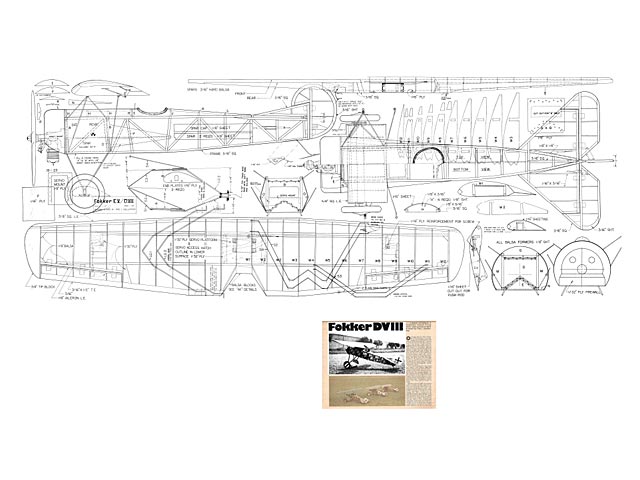 Quote: "One Sunday afternoon after witnessing a WWI Jamboree, I was feeling sorry for myself because I did not have a WWI flying machine. I was not so much interested in competition flying as I was in just having a model with the particular flying characteristics found in WWI aircraft. It was evident that the airplanes that best resembled the old WWI airplanes in flight used scale airfoils and were aerodynamically built to scale. In most cases, however, a scale airfoil meant structural problems which could only be solved by making the flying wires func-tional. The flying wires add something desirable to the appearance of a model, but they also add a lot of work and drag. I was looking for a simple airplane to build with a scale airfoil but hopefully without complicated rigging.

As my search progressed I discoVered that Fokker's chief designer, Reinhold. Platz, built airplanes the way I like them — cantilever wings without external wires for bracing. His more popular designs,, the Dr-I triplane and the DVII biplane, are seen frequently as the subject of model builders. But his last fighter design to reach production before the end of the war was a parasol monoplane. A monoplane without flying wires - what could be simpler to build?

Platz had wanted to build a monoplane earlier but Fokker had him make the triplane and biplane first. When Platz's first production monoplane was ready it was designated the EV following the earlier Fokker monoplane designators, EI through EIV. The E represented the eindecker or single-wing notation. As the early production models of the EV began to reach the front, some of them decided to shed their wings in flight. Although this was later traced to poor workmanship rather than a weak design, the wings were brought up to a new production standard and the airplanes redesignated the Fokker DVIII.

Reference material may be found under either designation or sometimes both as the EV/DVIII. Most warplane markings that we may be interested in will be of DVIII's. No matter what designation was used, this sleek (sic) airplane became known as the 'Flying Razor Blade' of World War I.

Since this wing was self-supporting, it had very thick spars in the center section producing a 20% thickness airfoil at mid-span. The Fokker/ Platz wing design technique was to determine the size spars required to carry the load and build a wing around them. Since the stresses were greater at the center than out toward the tips, the Fokker cantilevered wings had tapered spars - becoming fairly thin at the tips - about 7% thickness for the DVIII. The airfoil shapes were determined by using streamline shapes of varying thick-nesses from root to tip about a basic mean camber curve. The basic mean camber curve was similar to the airfoil found on the earlier wire-supported wings. When a 20% thickness streamline shape was added to this at the root section, it produced a flat bottom airfoil. But the 7% thickness at the tips produced a highly undercambered tip section. This thickness taper provided the desirable effect of washout at the tips, and with the upper surface straight from tip to tip, this thickness taper also produced dihedral.

So. We had found a World War I airplane that had a fascinating airfoil section, a cantilever wing without any flying wires, and many of the color schemes used a lozenge pattern camouflage. The lozenge pattern could have been a detriment if we were to consider painting. But, I considered it an added bonus because I had been wanting to use some of that Coverite lozenge camouflage ever since it first showed up at the local hobby shop. Since it came in either 1-1/2 or 2 in scale I had another choice to make - I like small airplanes (my workshop is small) so I studied the 1-1/2 in scale in more detail. I found that one roll of the Coverite lozenge camouflage material would cover the entire airplane at 1-1/2 scale. I also found that a near-scale plastic cowl was available at the supermarket in the form of whipped topping bowls, if I wanted a simple cowl. This fixed the selection as a Fokker DVIII in 1-1/2 in scale with a lozenge pattern camouflage color scheme.

The design had to be as light as possible, since a four-function radio was going to be carried by about 2 square feet of lifting area - including the subwing. Also adding to the weight of WWI aircraft were those oversized wheels. On the full-size aircraft, it was estimated that the subwing produced enough lift to support the undercarriage. The same is true of the model - so do not cut corners by omitting the subwing.

The major deviation from scale was the wing covering and this was done in the interest of weight. The wing of the full-size DVIII had a plywood sheeting on both top and bottom. But a sheeted wing would be a little too much of a weight handicap for the 1-1/2 scale. The finished models have been weighing in at about 44 oz for a wing loading of 22 oz per sq ft..." 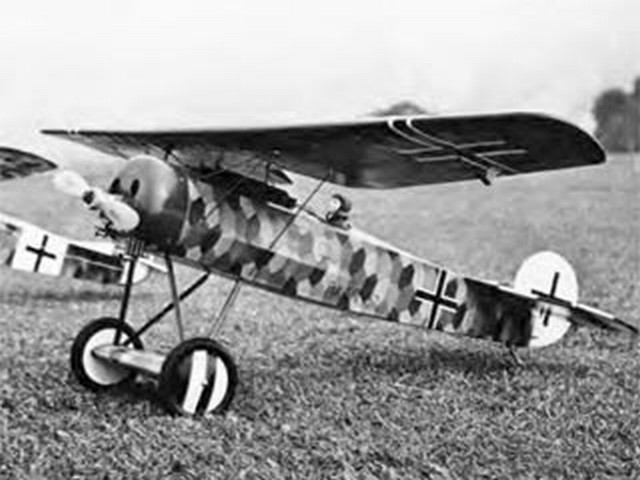