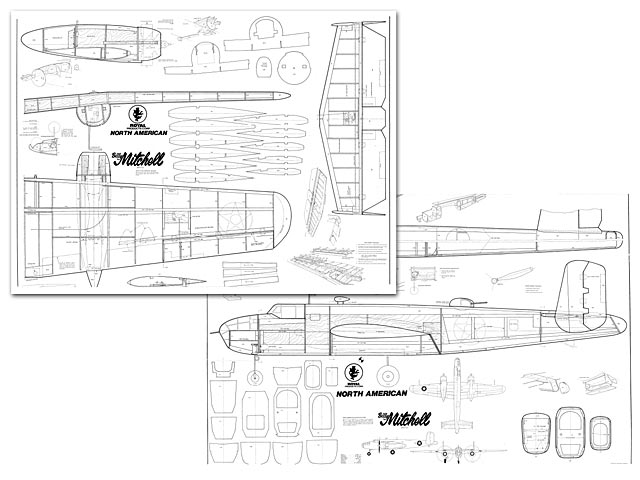 Over the last couple of years, twins have increased considerably in popularity in both sport and scale flying. Perhaps overlooked in the introduction of new twin kits is Royal's B-25 which has been on the scene for a number of years.

Our initial impression of high quality was maintained throughout construction. The kit consists of high quality balsa and plywood. The die-cutting of plywood and pre-shaping of balsa parts is superb. The parts match to plans is also excellent and no engineering problems were encountered in construction.

Much of the worry associated with engine alignment is eliminated by the plywood jig which frames the engine mounts. At the same time this jig serves as a wing dihedral brace and crutch for the engine nacelles. Even so, the major part of construction is the wing and nacelle assembly. Care must be exercised if warps are to be avoided and the wings evenly matched. Construction pleasure would be enhanced if the instruction manual and plans provided much more detail. As presently written - the average builder is likely to face many opportunities to ruin his project unless help is available from an experienced builder.

The B-25 comes complete with aluminum cowls which match the firewall perfectly. For added realism they can be notched to simulate cowl flaps. Pre-formed landing gear is furnished, however, retracts can be fitted with a little extra work. We used Rhom-Airs after reversing the main gear cylinders to provide wheel clearance. Other accessories included were bellcranks, control horns and wing bolts. Although Royal provides an excellent 'green house' for the bombardier, our version was converted to a B-25J with a solid nose. This version was flown by the 345th bomb squadron in the Pacific.

Now about flying - this is a big model but don't overpower it. Two .35's or .40's will provide more than enough power for superb flying. With two K & B .40's on a grass runway expect lift-off in about 100-125 feet. Once in the air and with gear up, you can throttle back to about 2/3 power and enjoy that 'special sound' that only twins provide. Landing is no problem if you just remember one rule: don't try a go-around on one engine. If one should quit, then take what you can get without jamming the throttle forward. That's a pretty good rule for any twin.

All in all, the Royal B-25 appears to be a very reasonably priced model considering the engineering involved in its development and the quality of materials provided. It is an excellent kit for an experienced builder. With more detailed plans and instruction booklet, it would be a good twin project for any good flyer."

Quote: "Royal Products North American B-25 Mitchell. Here is a really beautiful scale model kit of the bomber made famous by the Tokyo raids conducted by Jimmy Doolittle from the deck of an aircraft carrier. This was the most widely used American bomber in the second world war.

The first five 8-25s were accepted in february 1941, and had unbroken dihedral from wing root to tip. To improve directional stability, the outer wing was made horizontal on the tenth and all subsequent aircraft. This wind shape remained the same for the rest of the bomber's history.

These are but two paragraphs quoted from page 3 of the 12 page pamphlet which has a 3-view drawing inside the front cover and which includes the paint schemes on many of the various models. Such a book or a similar source is imperative For the 'Ultimate scale job' so by all means complete your scale presentation prior to beginning the construction.

The model we prefer was a B-25C which was identical to the B-25B in appearance and armament. The internal differences Included R-2600-13 Cyclones with Holley carburetors, a 24 volt electrical system, and an anti-icer and de-icer system. Fuel capacity was increased to 947 gallons in wing tanks and 1,520 gallons on maximum load. Redesigned bomb bay racks could accommodate the 2000 lb or two 1,600 lb, three 1,000 lb, six 500 lb, eight 250 lb, or twelve 100 lb bombs.

There is a picture on page 6 of an all black B-25C which, minus armament and other internal fixtures, was used for courier service in Indo-China. This particular picture was taken at Calcutta, 27 september 1945. Shown in detail, midway between the pilots side window and the bottom of the fuselage, is a picture of a girl, in a slit skirt. All the guns and turrets have been removed and such detail as the air-scoop in the leading edge of the wing outboard of the nacelle and the landing lights are shown. From this hasty description, you can readily see how important having the scale presentation is.

There are many B-25's in service today and a trip to see and photograph one would be well worth the time. I discovered one at the Arlington, Texas Municipal Airport and took many pictures of details on it. In so doing, I discovered there is only one nose wheel door hinged on the right side of the wheel well. There is a long pitot boom on the right wing leading edge toward the tip. Altogether there are many additional details available with pictures which are difficult to achieve from drawings.

The last impressive item in your scale presentation (besides the 3-views with scale and dimensions plus photographs of actual planes) is a narrative history of your choice of exact aircraft. For instance, should you choose to do one of the Tokyo Raiders, your local library will yield data such as a specific serial number and the names of the crew along with the exciting account of the mission itself.

Instead of detailing one specific plane, our intent is to give you the basic material and let you make the choice because you alone must decide how much and what detail you want to include.

Constructing the B-25: Now let's get to the business of gluing A to B. Actually all you need to do is put the glue in the box as you leave the hobby shop and shake it up on the way home then pour out the finished model!

Begin by gluing R1 to R2 (tape it together), spot glue R3 on (tape also and set aside to dry. Now assemble S1 through S5 on one of the sheet skins for the horizontal stabilizer, cut to fit, then stack and drill the ribs for rudder pushrod. Glue in the ribs, position the pushrod as shown, fasten the bellcrank to S-9 with the bolt provided and check linkage hole in the remaining sheet skin to clear the incoming pushrod, then glue the skin in place. Tack glue S-6, S-7, S-8 in place as shown and when dry sand both rudders and horizontal stabilizer to shape and prepare the mechanical linkage to fit as shown on the plans. The tail feathers are now ready to cover and you're one-third done - right? Sure was easy !

If you haven't already guessed it, I'm building mine for 'Eyeball' scale, but if you're doing an 'Ultimate' scale, you would have cut the rudder down to fit exactly and made provision to include offset elevator hinges like the rudder, plus, carefully follow the exact outline shown in your 3-views, right?

Well on to bigger things. Fuselage is next! Start by laying out all those precisely cut beautiful formers F-1 through F-8 fitting the nose gear provided to F-2,3. Now epoxy the fuselage doublers including F-16 and longerons with uprights to the sides making one right and one left, natch! Mark former positions on both sides and carefully glue in the formers in such a manner that the structure is straight as a string! Add F-10, 11, 12 and 13 to be sure it's aligned top and bottom.

Once that's dry, use the slant cut planking (F-14) . Glue it on the 'Shoulders' of the formers so when sanded later it will give a nicely rounded effect. Now add F-1S which is the top and bottom planking. With the exception of the tail blocks, which are added when the horizontal stabilizer is fitted, and the canopies, plus detail like antenna, turret..." 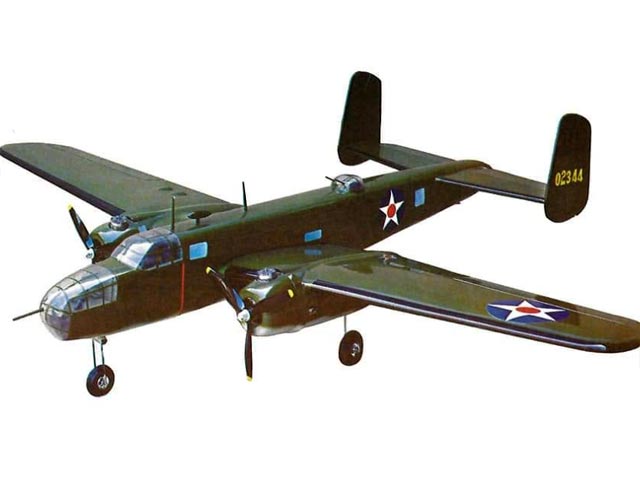