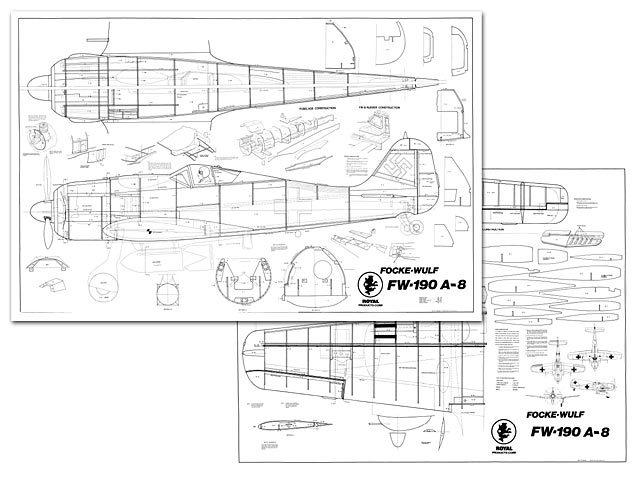 Quote: "From Royal Products Corp (aka Marutaka) The German 'Butcher Bird' for glow power .60 2t plans shows retracts installation and with a little effort flaps can be added."

This fabulous WWII German fighter plane is now a legend. Once a mainstay of the mighty Luftwaffe, it is now mostly just a memory of those who flew it or flew against it. To aid you in constructing a beautiful scale replica of this top line fighter, we have gathered the following data:

Featured as the centerfold of the August/September 1965 issue of Air Progress magazine our scale subject is shown in phantom drawings with detailed isometrics. The accompanying text is quoted, in part, as follows:

The Focke Wulf Fw-190 was the top fighter acquired by the Luftwaffe in World War II and armed as it was with four cannon and two heavy machine guns it was a formidable aircraft indeed. All auxillary services were electrically operated and controlled by push buttons. A novelty at the time was the jettisonable canopy. Each wing root Mauser cannon carried 200 rounds per cannon and the outboard Oerlikons, 60 rounds, while the machine guns were armed with 1,000 rounds. It is powered with a BMW 801 D-2 air-cooled 14 cylinder 1700 hp engine (capable of 2100 hp with MW 50 menthal water injection for take off). The plane had a top speed of 390-400 mph at 21,000 feet and a service ceiling of 37,000 feet. Range at cruise speed was 525 miles. The basic Fw-190 was made in more than 20 different models and after development in the Spanish Civil War, it saw service on all German fronts and the Japanese even had one!

In addition to the above data, Scale Modeler magazine vol 6, no 1 dated January 1971 has several detailed pictures of a Fw 190-A-7/R3. These are only two examples of the wealth of data available to you, should you desire to make your ship true scale. If eyeball scale is your goal, they will still be a great help.

Study the plans carefully and compare the parts included in the kit to the drawings. When you are thoroughly familiar where everything goes and how it fits, begin actual construction with the horizontal stabilizer. Glue the S-6's to the S-5's and while these are drying draw the rib positions on one S-4 and then glue S-1's, S-2's and S-3's in place on it. Add ribs and finally the top sheet. Now spot glue the stabilizers in place and when dry, sand to airfoil shape shown on the stabilizer top view.

The rudder frame is assembled by gluing parts V-3, V-4, V-5, V-6 and V-7 together as shown in the isometric adjacent to the rudder side view. When dry, add V-8 and V-9 ribs to the V-11 sheet sides and the V-10 block in that order. Glue the V-2 blocks together, but do not attach to the fin at this time. Next, add on R-1 , Rr-4, R-5, Rr-6 to one R-7 and then add the other R-7, R-2 and R-3 in that order. Spot glue this rudder assembly to the recently completed fin and when dry, sand to the airfoil shape shown on the fuselage top view and then separate them at the hinge line,

Note: the V-2 block will be shaped after the fuselage is built and the horizontal
Stab is spot glued in place.

The wing will be constructed next to allow proper fit in the fuselage which will be built last. If you are building a super scale version, this is the time to give some thought to such problems as flaps, lights, bomb releases etc. Which you must incorporate yourself. Keep in mind also that our recommended dihedral is measured at one tip (with the opposite panel flat).

To insure a true wing, draw an accurate chord line centered on ribs W-2, W-6 and W-11. Pin main spar W-12 in place on a flat workbench and add ribs vv-1 through W-11. Then, adjust a 1/4 in square balsa strip (not included) under the aft end of these ribs such that the lines of W-2, W-6 and W-11 are parallel with the work-bench top. Install the W-3a, W-16 and W-17 rib doublers. Then, without stress to the frame, add W-18 and W-19 for fixed landing gear struts. W-24 may be added as you build the opposite wing panel such that when dry the proper dihedral is incorporated. The leading edge pieces W-13 and w-20 are now installed and again take care not to induce warping stresses as you do so. Now carefully glue one sheet of balsa along the aft ends of the ribs to form the top trailing edge. Measure and mark the portion to be removed in the hinge line shown in the isometric drawing behind the left wing top view. As this installation dries, install the bellcrank and linkage as shown between W-7 and W-8. When dry, remove this panel and build the other in a like fashion, to the same degree and in place while this panel is blocked up to attain the proper dihedral. When the second panel has dried, you will have a very delicate but true wing frame. The trick is now how to add all the sheet skin without making it look like a prop!

First add W-25 and W-26 in the center section. Then carefully trim and install all the balsa sheeting on the bottom then top of the entire wing. Be sure to install the aileron pushrod before adding the top sheet. The leading edges W-23, W-21 and W-34 may be added in that order (W-22 is a key for fuselage fit and should be aligned and installed when the wing is fitted to the fuselage). Cut away the previously marked aileron hinge line material and add the W-31's to the wing followed by W-29's and sheet scrap at inboard end of the aileron well..." 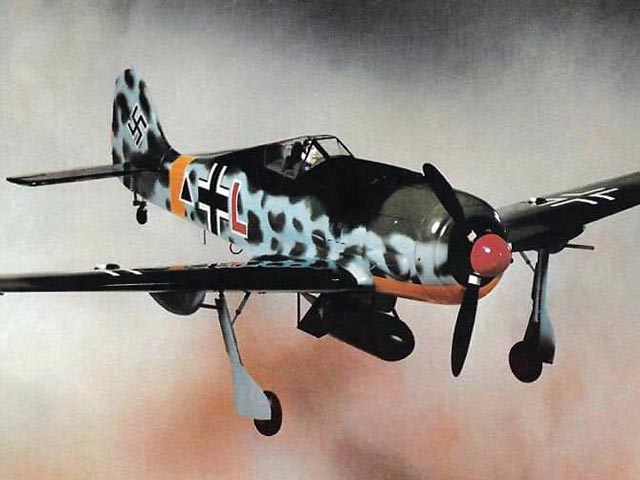