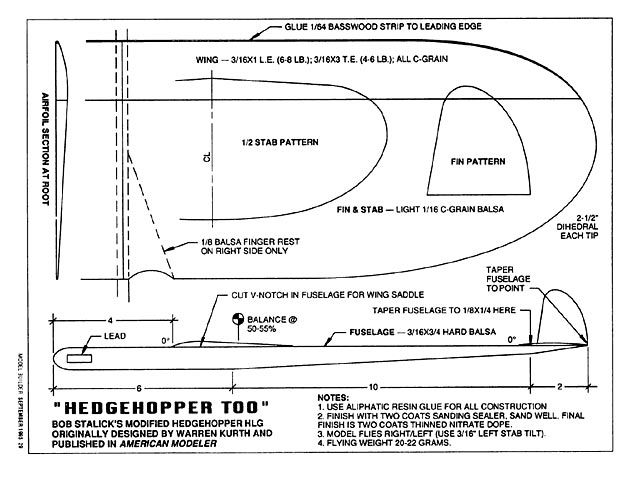 Quote: "Was looking at Sept. 1995 Model Builder and noticed this hlg plan ...only takes up one page. Bob Stalick's modification of the Hedgehopper by Warren Kurth."

Quote: "PLAN OF THE MONTH: HEDGE-HOPPER TOO. Warren Kurth's Hedgehopper appeared in American Modeler magazine many years ago. I built a number of them when I was in my 30s. It was a nice ship, easy to build, easy to trim, and easy to lose. I'm certain i've built at least 20 of them. I have, over time, found a number of changes which make the model perform even better - that's why it's called Hedgehopper Too.

Recently I gave a set of my plans to Dave Vincent, who was not having much success with his HLG designs. He built four of them, and got all of them trimmed out with just a few practices tosses.

If you're interested in becoming competitive in hand-launched glider, you can build yourself a Hedgehopper Too with just a few hours in your workshop this week. Here are some suggestions to help you along.

1. Pick your balsa carefully. The fuselage should be 'stringy' A-grain balsa, about 10 pound stock. The wing is C-grain, 6-8 pound stock for the leading edge and as light as possible (4-6 pound stock) for the trailing edge. The tail parts should be very light C-grain.

2. Glue the wing leading and trailing edges together using aliphatic resin or other hard-drying glue. After cutting the wing to shape, face the leading edge with 1/64-inch basswood strip. Taper the blank to about 1/16-inch thick at the tip. Carve and sand the leading edge to a curved profile. Sand the trailing edge flat so that the extreme edge is about 1/20-inch thick. Cut the blank in half, sand the dihedral angle into each wing root and glue the halves together.

3. Cut out the stabilizer and fin and taper the tips to about 1/32-inch thick. Sand the top of stab to an airfoil shape. The fin is sanded to a symmetrical airfoil section.

4. Cut a shallow V slot cut into the fuselage so that the center of the wing can fit in place. Also, note that the fuselage is tapered in thickness toward the tail as well as in profile. The back of the fuselage comes to a point.

5. Glue the wing in place, making sure it is properly aligned on the fuselage, and let it cure for at least 8 hours. When dry, lightly sand the back of the fuselage so that the stab has about 3/16-inch stab tilt to the left (left tip higher than the right when viewed from the rear) and glue the stab in place. Glue the fin in place with no offset.

6. Sand the entire model lightly, using very fine sandpaper, then brush a coat of balsa fillercoat on the wing and fu-selage only. Use very fine sandpaper to sand the filler down to bare wood. Put another coat of fillercoat on the top and bottom of the wing only. Sand again. Now brush a coat of nitrate dope over the entire model, including the stab and fin. After this coat dries, put on a final coat of nitrate. Let it dry thoroughly.

7. The model should bal-ance at 50-55 percent. It won't, so add clay to the nose until it does. Remove the clay and weigh it on a gram scale. Cut a piece of lead that weighs the same amount as the clay, and, using a hammer, beat it into a rectangular piece about 3/16-inch thick. Cut a slot in the fuselage the size of the lead weight. Epoxy the lead in place. Fine-tuning the CG will need to be done at the field - use modeling clay for this. If the model is nose heavy, file or carve off excess lead until it balances.

8. Before you go to the field, use a large felt pen to put your AMA number on the wing. Also, put your name somewhere on the model. I also like to spray some day-glow paint on the wingtips and fin to make it easier to see in the air and on the ground.

9. Try a couple of test glides over the proverbial tall grass. The model should turn slightly to the left; if it does, you're ready for a good heave. If not, tweak the fin a bit to the left. If it still doesn't turn, put a small piece of clay on the left wingtip (a piece the size of a pencil eraser will do). If it dives, tweak the trailing edge of the stab up a bit.

10. Throw the model hard and up with a slight bank to the right. The pattern should be a right turn in the climb, with a slight stall at the top transitioning to a left-hand glide. Some shifting of the CG, tweaking of the fin and stab will fine-tune your model into a highly competitive machine."