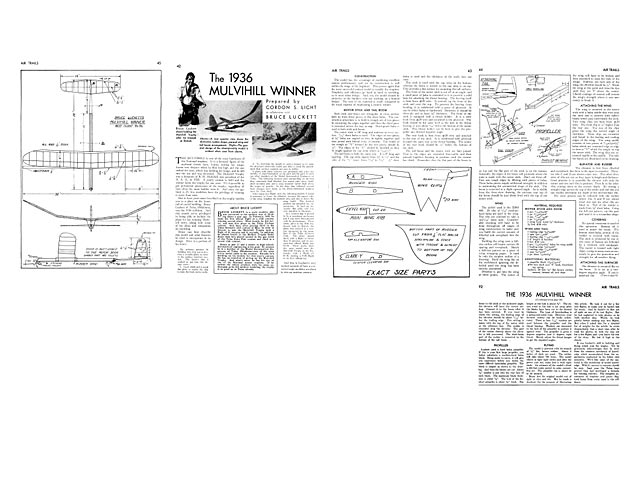 Quote: "THE MULVIHILL is one.of the most handsome of the National trophies. It is a bronzed figure of the mythical Greek hero, Icarus, testing his wings. Icarus met disaster when he flew too high and the sun melted the wax, which was holding his wings, and he fell into the sea and was drowned. The Mulvihill Trophy was a donation of B. H Mulvihill, vice president of the NAA, in 1923. A yearly contest is held and the winner holds the trophy for one year. It's impossible to get permanent possession of the trophy, regardless of how often the same builder wins it. And since the age limit is 21, few modelers have the privilege of winning it more than once.

But to have your name inscribed on the trophy entitles you to a place on the honor roll of model building. Bruce Luckett of Tulsa, Oklahoma, was the 1936 addition. And this month we're privileged in being able to include the plans for his winning Mulvihill entry, along with some of his ideas and viewpoints on modeling. Bruce can best describe this model and what features he tried to incorporate in its design. Here is a portion of his letter:

My primary purpose in building this ship was to produce a suitable plane to enter in the outdoor duration contest. The factors that I wished to put into this design were:

1. Good climb and a good flat glide to enable the ship to take thermals more easily.
2. To distribute the weight in such a manner as to make the ship both inherently stable and able to stand the punishment that outdoor contests are sure to inflict.

A plane with these features was produced only a fter ten months of experimentation on my part and the part of various other members of the Model Aeronautical Engineers of Tulsa. The following features were outstanding on the first ship : extremely high dihedral, low aspect ratio wing, fairly short moment arm, and a wing mounted rather high above the center of gravity. In the ships that followed several basic changes were made, as the above-mentioned features were far from ideal.

After many test flights with the following models I found it necessary to lower the dihedral, increase the aspect ratio of the wing, lengthen the moment arm, and also to lower the wing itself. The finished product far exceeded my expectations. It had an unusually flat glide and was very sensitive to thermals. As a contest ship it proved to be a consistent performer and I was more than pleased with its performance.

Three weeks prior to the 1936 Nationals held in Detroit, the plane was entered in a contest sponsored by the members of the Tulsa Airmen's Club. The plane placed third, with a flight of better than 15 minutes, and its seccond-best official flight was 10:50. Three weeks later this same model won the Mulvihill Trophy at the Nationals, with a flight of 41:41, making a 9:06 flight on its first official try..."

Note this is not a full size plan, this is a copy of the original magazine pages.

Article pages are included in the planfile. 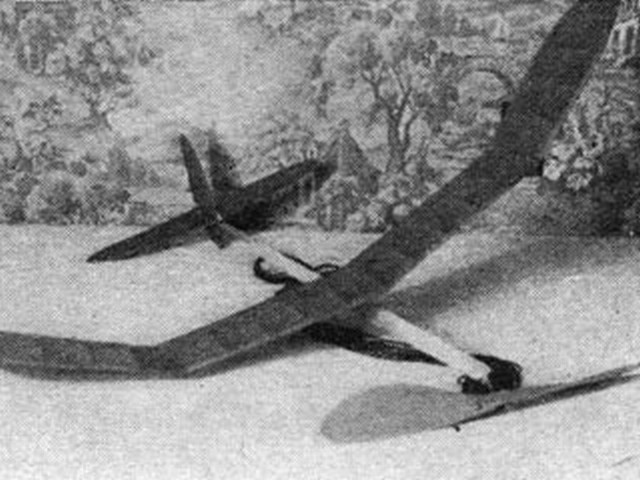