Quote: "an attractive scale model with fine flying qualities. Though an excess of dope brought the weight up to two pounds plus and a wing loading of 14 ounces (I'm sure you can do better) it has a nice flat glide and is quite capable of thermal hopping. The plans are scale, with the exception of the increased dihedral and enlarged stabilizer, which combine to give a flight pattern as stable as many high wing jobs. As a rudder only design, it is very responsive, using the Adams Dual Actuator on 4.8 volts (4 nicads with 3.6 tapped for the RCVR). Though the original has an NACA 23015 airfoil, a change was made to a modified semi-symmetrical section with a rounder leading edge, maximum thickness further back and a flattened section on the bottom-rear for easier building. This airfoil has excellent penetration and good stall characteristics. It has relatively low drag on a wing of this size and as a result the plane moves out somewhat faster than expected on only half throttle. An Enya TV .09 was used for several reasons; While a hot .049 would be powerful enough, the wide cheeks present a lot of resistance to a small prop, so it was decided to go to the larger engine using an 8/4 Cox prop. As nose weight was needed, the Enya served that purpose better than a lightweight and its throttle lended itself to an easy arrangement for manual adjustment..."

Update 20/08/2016: Replaced this plan with a clearer copy, thanks to theshadow. Also added article pages. 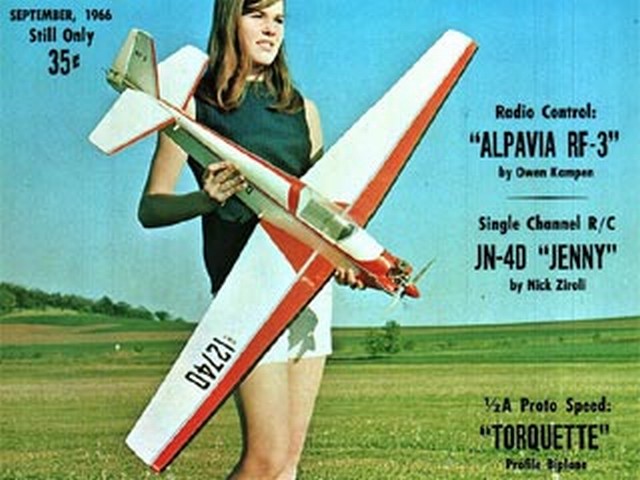