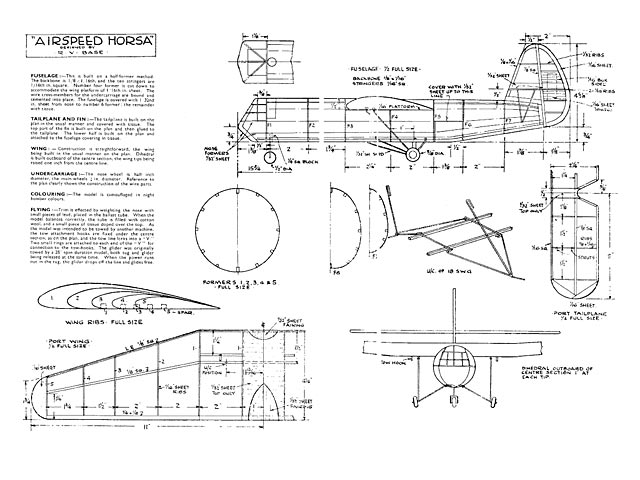 FUSELAGE: This is built on a half-former method. The backbone is 1/8 x 1/16 and the ten stringers are 1/16 square. Number four former is cut down to accommodate the wing platform of 1/16 sheet. The wire cross-members for the undercarriage are bound and cemented into place. The fuselage is covered with 1/32 sheet from nose to number 6 former: the remainder with tissue.

WING: Construction is straightforward, the wing being built in the usual manner on the plan. Dihedral is built outboard of the centre section. the wing tips being raised one inch from the centre line.

UNDERCARRIAGE: The nose wheel is half inch diameter, the main wheels 5/8 in diameter. Reference to the plan clearly shows the construction of the wire parts.

COLOURING: The model is camouflaged in night bomber colours.

FLYING:Trim is effected by weighting the nose with small pieces of lead, placed in the ballast tube. When the model balances correctly. the tube is Riled with cotton wool. and a small piece of tissue doped over the top. As the model was intended to be towed by another machine, the tow attachment hooks are fixed under the centre section, as on the plan, and the tow line forks into a 'V'. Two small rings are attached to each end of the V for connection to the tow-hooks. The glider was originally towed by a 28 span duration model, both tug and glider being released at the same time. When the power runs out in the tug, the glider drops off the line and glides free."

Note this plan is printed with general layout at half-size, formers at full-size.