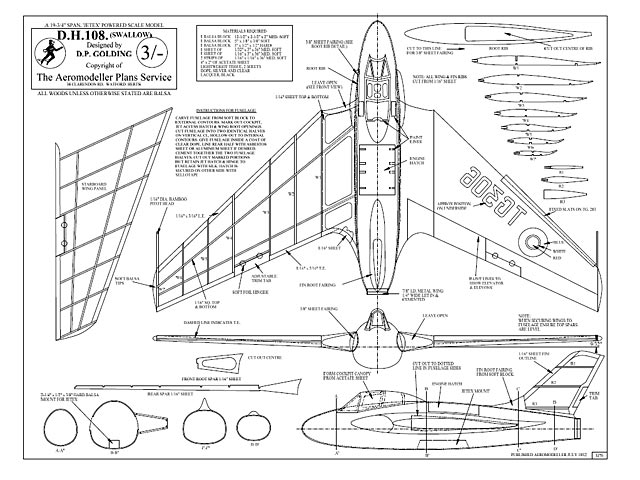 THE famous TG.306 'swept' flying wing that provided so much valuable information for the design of the Comet and subsequent de Havilland jet fighter designs, is the subject chosen by scale expert DP Golding for scale Jetex free-flight. And for fast flying thrills, unique stability and absolute realism, this departure from the normal Jetex type of job is very hard to beat.

Fuselage. The Fuselage is carved from a soft balsa block to the external contours given in the four cross-sections. The cockpit, jet access hatch and wing root openings are then marked on, and the fuselage is cut into two identical halves by bisecting on the vertical centre line.

Hollow out to the internal contours, give the insides a coat of clear dope and line the rear half with asbestos sheet or aluminium foil as a safety measure if you feel this is necessary; the original had none. Then assemble the two halves and cut away the marked cockpit, etc. Save the jet access hatch, so that it can be hinged with a silk strip at a later stage, it is retained on the other opening side with Sellotape.

Fin. The fin root is cut to plan and side views from soft block, fixed in place and carved concave to fair in with the normal fin structure. Attach to fuselage, then add fin after building over plan. Cement the root ribs accurately in position, add fairing blocks carved from s in. soft balsa and build wing over plan, starting with the 1/16th square lower mainspar..."

Quote: "...a scale model designed for use with the Jetex 100. It was designed by D. Golding and has a wing span of 19¾ inches. It is a model with clean lines and really typifies the excitement that abounded in the British air industry post war. I'm not really sure if she would make a suitable flying model with the carved log fuselage. Maybe I've been led astray by all the stringered fuselage models typical of the Jetex type. It would still make a beautiful static model." 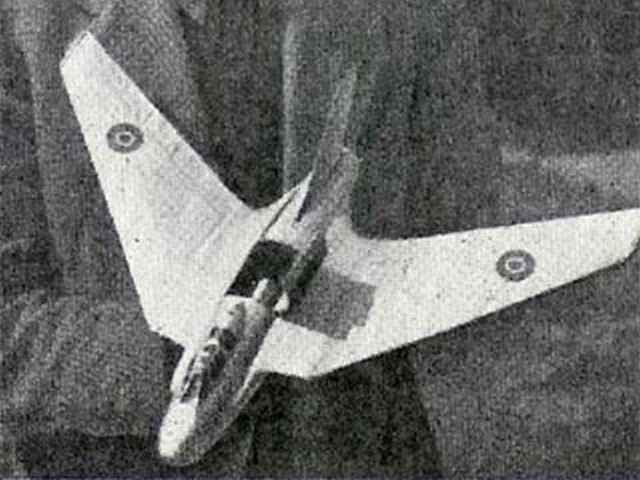