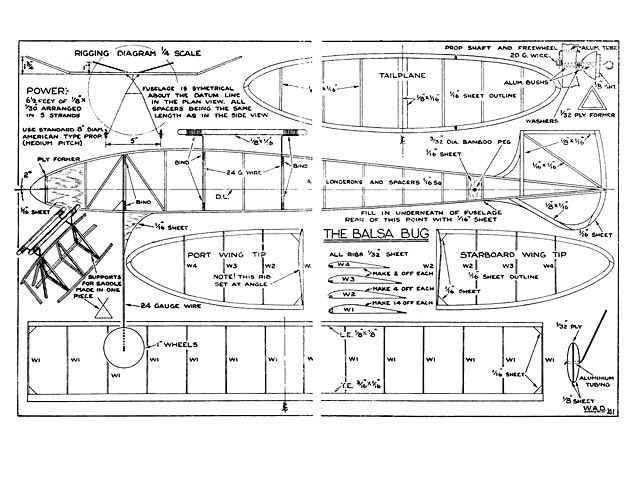 Quote: "General Features. This little model was built mainly with the idea of trying out the triangular type of fuselage. To my way of thinking the advantages of the triangular fuselage are many and varied. In the first place there is a definite saving in weight since less wood is used (an important point in these days of balsa shortage!) so that it weighs less even than the simplest form of the square box.

Triangulation of members, too, gives greater rigidity to the whole structure so that the builder need not be worried on this score. It is particularly suited to the smaller type of model with fuselage length up to about 30 inches but in the Wakefield class we come up against other difficulties. In order to get the fuselage cross-sectional area required by the rules the triangle must be relatively large, thus resulting in a wide, clumsy shape and so it is out of the question here.

The 'Balsa Bug' is a typical example of a triangulated structure applied to a small model. The plans on the following pages are drawn full size so it is only necessary for the builder to trace them on greaseproof or tracing paper or build directly over them. There is ample room for the motor, which, owing to the point of the triangle being uppermost, is relatively low slung. This gives a fairly low centre of gravity position which is helpful.

Simplicity of construction is aimed at as far as possible and the following notes are for the builders' guidance.

The Fuselage. Build two sides on the plan, the same as for a rectangular type fuselage. Then trim away the inside of each top longeron so that a triangular section is formed, the point being at the top. The two sides are now held together at these two longerons, the lower ones splay out at a sharp angle. These two longerons can now be cemented and bound together. Cut the lower spacers to the same length as in the side view and cement in place. Now add the ply nose former and remove the binding from the top longerons.

Next bind the wing mount and undercart legs in position. Finally make the tail mount and fix in position, making sure that it is quite upright.

Wing and Tailplane. The wing construction is quite normal except for the omission of a main spar. Pin the three parts down whilst they are drying. The tips being cemented to the centre portion afterwards to give a 1-3/4 in dihedral under each tip..." 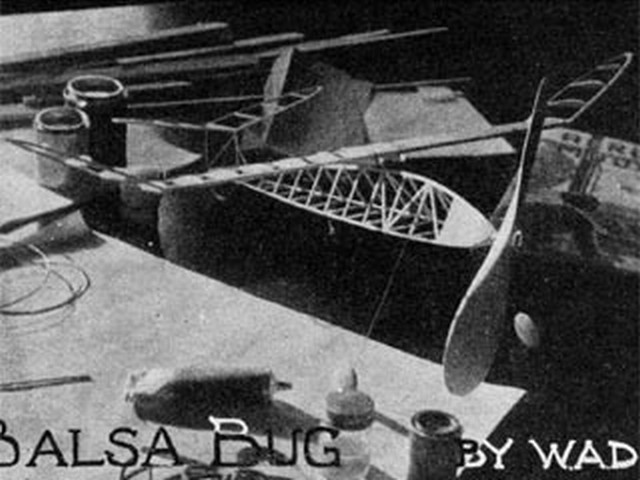