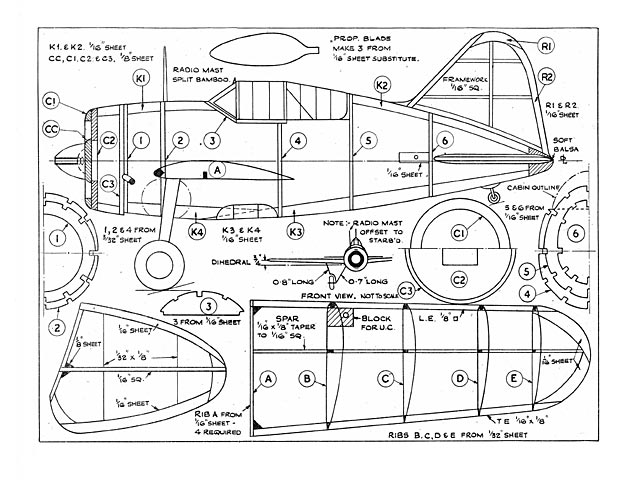 Quote: "THE Brewster Buffalo, or F2A-2 as it is known in the US Navy, is a single-motor mid-low-wing monoplane of corpulent proportions and as a first-line Fleet fighter has now been superseded by faster and more heavily-armed types.

It is powered by a Wright Cyclone nine-cylinder air-cooled radial motor developing a normal output of 900 hp, and has a maximum speed of 313 mph at 13,500 ft. The usual operating speed is around 250 mph, and the Buffalo has an initial to of climb of 2,070 ft per minute. With auxiliary fuselage tankage the range is nearly 1,500 miles.

The armament consists of four .5 machine-guns mounted two in the motor cowling and one in each wing, and there is provision for an external bomb-load of 200 lbs.

The fuselage is a semi-monocoque construction of light alloy, and the wings and tail-unit are metal structures with stressed skin covering. The movable control surfaces are fabric-covered.

The undercarriage retracts inwards into the fuselage and wings and is hydraulically-operated.

Buffalo fighters arrived in this country in the summer of 1940, and after being tried out on operations were relegated to Training Command. Later versions were delivered to fighter squadrons in the Far East, but with the arrival of the Japanese S-00 on the scene were found to be of little use.

Buffaloes have also been delivered to the Belgian, Netherlands and Finnish Air Forces.

British and Dutch Buffaloes were camouflaged on the sides and upper surfaces with dark earth and dark green, and were light grey underneath. The modified Dutch marking consists of an orange triangle with a black outline, and this version is shown in the lower photograph.

Construction: Fuselage: Cut out all formers from sheet, cut out keels from 1/16 sheet substitute; pin on to plan. Cement on left half formers, checking that they are upright while setting; when set add stringers. Next build the cowling: Cut out C1 and C2 from 1/8 sheet, cement together, cut out block to fit the square hole in C2. Cement CC (an 1/8 sheet disc) to this block, drill the block and cement in a length of aluminium tubing. Cement on 8 cowling spacers (1/8 by 1/16 in) spaced at 45 degrees, add C3, cover with 1/32 sheet. Remove fuselage left half and add right formers and stringers. Cement on the soft balsa block at the tail and the two 1/16. sheet rear motor peg attachments. Add cabin framework. Cement on rib A on each side... " 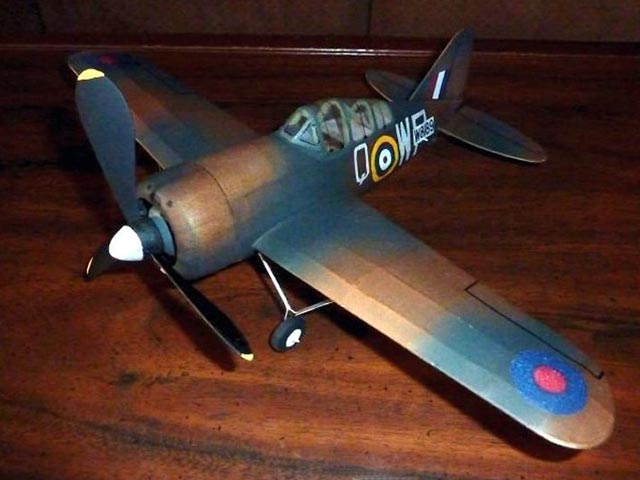 This design comes from J A F Halls and published in Aeromodeller June 1944. It was also re-published by Nexus in Flying Scale Rubber Models Vol 2 in 1996.
MartinSkinner - 12/12/2012
I’ve always been very fond of Brewster’s Buffalo, an aircraft that received a lot of bad press for all its heroics. Designed for another time, it found itself attempting to stem the tide at the outset of World War II. While not doing well in the hands of the US Navy/Marine Corps at Midway, it nevertheless performed admirably for the British over Malaya. In the hands of Finland against the Soviets, it proved to be a superstar.
This particular model is finished in the scheme as flown by Sergeant Geoffrey Fisken, 243 Squadron, RNZAF during the Battle of Singapore. Sergeant Fisken was fortunate to evacuate to Australia where he continued the fight, surviving the war as an ace fighter pilot with 11 victories, the British Commonwealth’s leading air ace of the Pacific Theatre during World War II.
This is a peanut scale model. Propeller is fabricated from a plastic food container. The Buffalo design is very much like that of a classic 1930’s racer, large on fuselage and power, very short on wing area. In order to fly successfully, the builder’s challenge is to construct as light-weight as possible… not my personal forte… but 'she' certainly is pretty.
Thank you to everyone at OuterZone. You’ve done so much in support of our wonderful hobby.
Neal Green - 28/04/2020
Add a comment