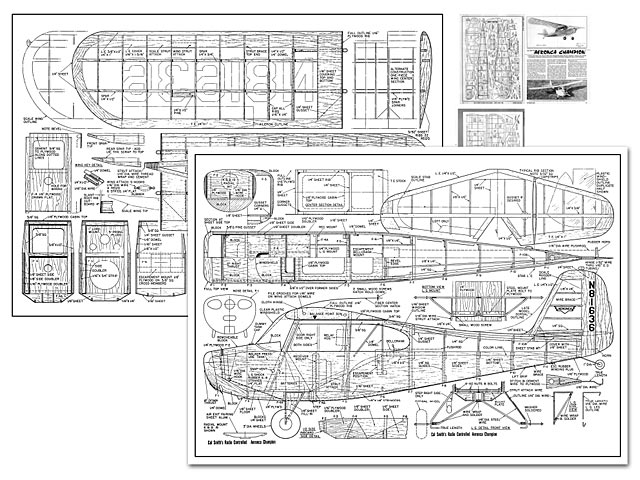 The plan was originally from July 1956 issue of Young Men magazine.

Quote: "Cal Smith's Aeronca Champ. A classic scale design from the mid-50s which disappeared along with the magazine in which it was originally published. Complete building instructions included with plans. Background story by Bill Northrop.

To the new generations of modelers who came into the hobby over the past 25 years and may not have heard of him, we introduce the late S Calhoun Smith. Cal Smith was a former designer of control line and R/C models during the post-World War II years, and his work mostly appeared in Air Trails magazine. At the time that his R/C Aeronca Champion was published, the magazine was using one of its less than model-type aliases 'Young Men'. This was the July 1956 issue.

In that issue of Young Men, just to give you an idea of the status of R/C at the time, there were only ten ads that had anything to do with R/C materials in the whole magazine, and of the companies represented, only three exist today - Ace R/C being the most prominent. There were 65 other model advertisers in the 68-page magazine.

As this was an era when rudder-only was the primary control system in use, most designs published featured this meager arrangement. And of course, the model pretty much had to be an inherently stable design that could fly well without any control, as this was the normal condition! It's funny, but old-timer free flight with radio assist, the perfect type of model to use as a start in R/C, was unknown in those days! Certainly, scale R/C was very limited in the choice of subjects, with cabin-type lightplanes such as the Champ being almost the only way to go.

Cal Smith mentioned in his article that the Champ structural design was based on the famed Piper Cub J-3 (oz256) design by Chuck Hollinger, which had previously appeared in Air Trails. This Cub went on to be a popular kit by Berkeley, and eventually, with improvements, became the early Sig J-3 Cub.

Rather extensive building instructions were included with the full-size plans for the Air-Knocker, and not published with the article. We'll follow the same procedure. The scale is 2 in = 1 ft, and the only deviations were the span, stab outline, and dihedral. Plans are quite accurate, as they were developed from dimensions taken from the real aircraft.

The span had been reduced to increase wind penetration (by raising wing loading), an important feature when flying rudder-only. The stab area and dihedral had been increased to improve stability. Dotted lines provide the necessary modifications for scale outlines. Control surface hinge line locations are fairly easy to guesstimate. Other mods to suit modern construction materials and adhesives are up to the individual builder.

If any of our readers would like to see other 'lost' designs from the old Air Trails publication, or have full-size plans they would like to share with other readers, drop me a line. Famous designs never die, they just fade away for a couple of generations, only to return again, just as new now as they were then." 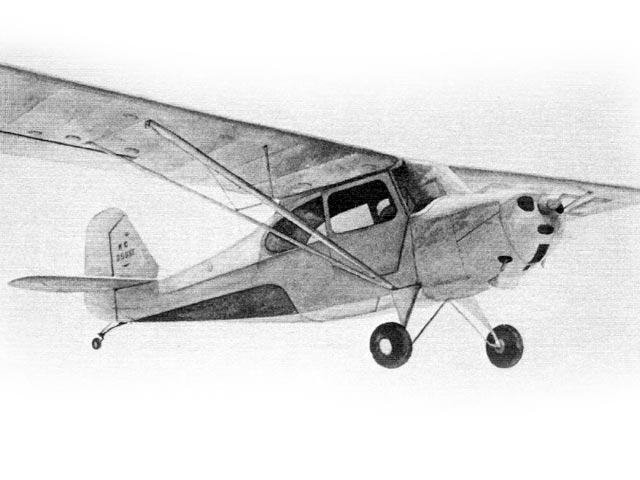 For what its worth, I was looking at your plan of the Aeronca 7AC # oz3770 drawn by S Cal Smith and noticed that the article attached says continued on page 95 - there were no additional pages found. I have the MB magazine and scanned in the rest of the article and have attached it. There was not much additional printed information but it did explain why the plan shows both a smaller 60" wing and also a scale outline for the more correct 70" version more suiting the 2" to the foot fuselage that the plan was originally scaled at. Regards,
Mike Foster - 01/10/2021
Reading the MB article, it seems the original 1956 paper plan came with full build instructions (not printed in the magazine). It's a long-shot, but if anyone has a copy of those instructions, then we could usefully split this listing into one for the MB plan, one for the AT (Young Men) plan.
SteveWMD - 01/10/2021
Add a comment