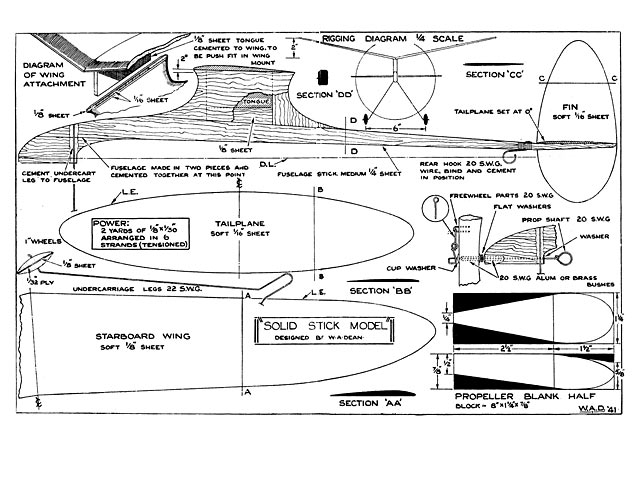 Quote: "HERE is a stick model that is really different. Only sheet balsa is used and unlike most stick jobs the general lines are quite graceful. Construction is very simple and the model should not take the average modeller more than four or fie evenings to complete. The plans are drawn full size so just lay some transparent paper over them and trace the various parts off.

The fuselage stick is made in two pieces from 1/4 in sheet to save wood and also to have the grain running the way we want it.

The wing mount is covered pretty well by the plan, but perhaps a few words regarding it may be helpful. Two soft pieces of 1/16 sheet are cut to shape and three pieces of 1/8 sheet sandwiched between them so as to leave a recess into which a tongue can fit. This is sanded to a streamline shape after cementing in position. The fuselage rnay now be also sanded to the indicated section and the tail hook bound in place.

Many stick models rely on a piece of bent metal for a propeller bearing, but this is not a very satisfactory method. With the type of stick on this model, bushes may be used in the ordinary way as with a nose block.

The airscrew is made from fairly soft balsa, White tissue being doped on when completed.

The freewheel arrangement is of quite conventional design and should not give you any trouble either when building or flying.

Next construct the undercarriage using one piece of wire. Make the U-shaped piece which fits over the fuselage slightly smaller than a 1/4 in. Cut a shallow slot in the fuselage at the attachment point so that the U piece fits snugly in position. Apply plenty of cement at this point so as to make a rigid fixing.

The wing is made in two halves, each side being propped up when cementing, to give a dihedral angle of 2 in. The 1/8 sheet tongue is first cemented in place and then two pins pushed through the wing to form an additional support. The joints should be well covered with cement and then three strips of 1/2 in wide tissue doped along each one.

The tailplane is made in one piece and cemented to the fuselage. Check carefully with the wing for alignment, then cut out the two pieces forming the fin, fix in position using a set square to check the ang]es so formed with the tailplane.

In order to protect the flying surfaces from hard knocks, strips of 1/4 in wide tissue may be doped along the leading edges of these members if desired. For protection from handling and moisture the fuselage can be given a couple of coats of banana oil, although care should be taken that this does not add too much weight as even one coat is surprisingly heavy.

Lastly, the rubber motor is arranged in a rope - a small ring fitted to the rear end - and attached to the model. The point of balance should be about an inch behind the leading edge, but don't be worried if this is slightly different on your Job, as the flying surfaces can be warped to obtain flying trim. If, however, the propeller used is on the light side and consequently your model balances somewhere near the TE, there is nothing for it but to shift the wing mount back.

Choose a fairly calm day for the initial flights - try a few hand launches from shoulder level until a lang flat glide is obtained - then give a few turns and ROG. As you get to understand the model increase the turns until the limit is reached. As all modellers know, the limit is the turn before the one on which your rubber breaks!

The rubber should be stretch-wound from the rear by means of the ring provided. Be sure to lubricate the motor well after every half-dozen flights or so." 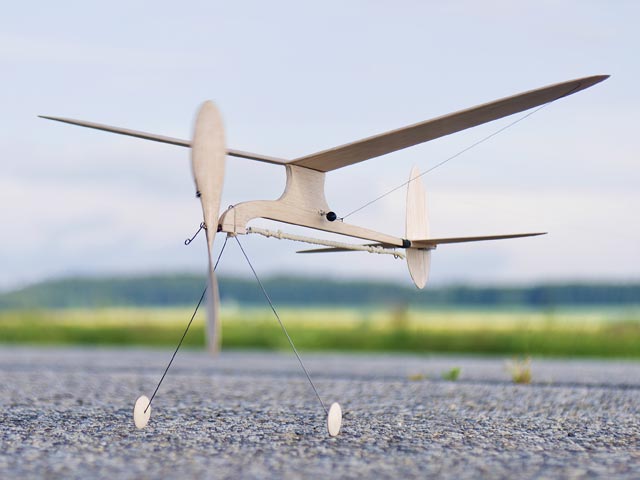