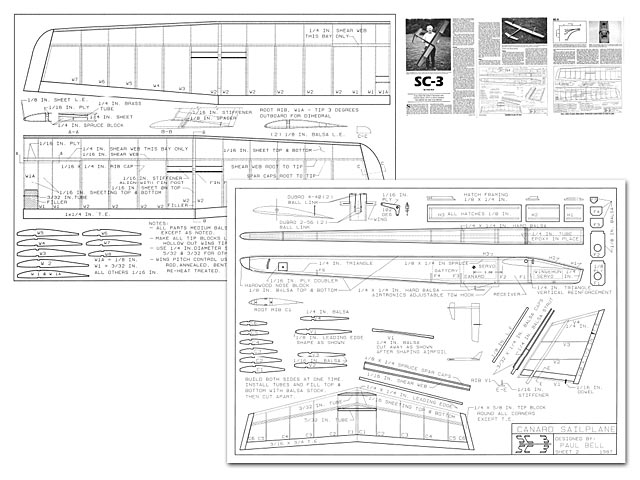 Quote: "If you share the author's fascination with unusual planes, here's a canard sailplane that satisfies the need to be different. SOME unusual looking airplanes have been produced in the course of the history of aircraft development. Over the years I've been intrigued by such designs as flying wings, twin fuselage aircraft and especially canard configured planes. Some of the current flock of civilian business aircraft like the Avtek 600, the OMAC Laser and, of course, the Beech Starship qualify in that respect.

Back in the old days when I was primarily a power flyer (sic), I had two original designs featuring Falcon 56 wings with no dihedral and a pusher engine in the .35 to .40 cubic inch category. The second of these was also flown off water (with a lot of effort) using a pair of large GeeBee floats. For the past few years I have been principally a sailplaner, and decided that a sailplane of unusual design, specifically canard configured, would be interesting so I set out to design one.

It has been my experience that when you appear at the flying field with some strange looking device, you will invariably become the center of attraction. Many believe that these things will not fly at all, let alone fly very well. My escapades with this particular sailplane followed that course. With its radical lines and Circus Pink and Maroon colors (Bell's factory colors) it attracts much attention. When I finally started getting it into the air consistently I got a lot of support including a few cheers. This plane was flown against three flying wings in the Unusual Design Category of the June 1987 Eastern Soaring League contest sponsored by my club, The Long Island Silent Flyers. Although it finished last, it also had a second place in the Original Design Competition held during the same contest." 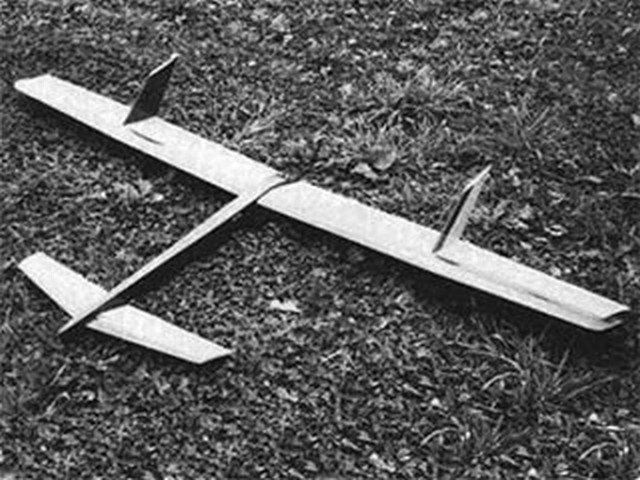