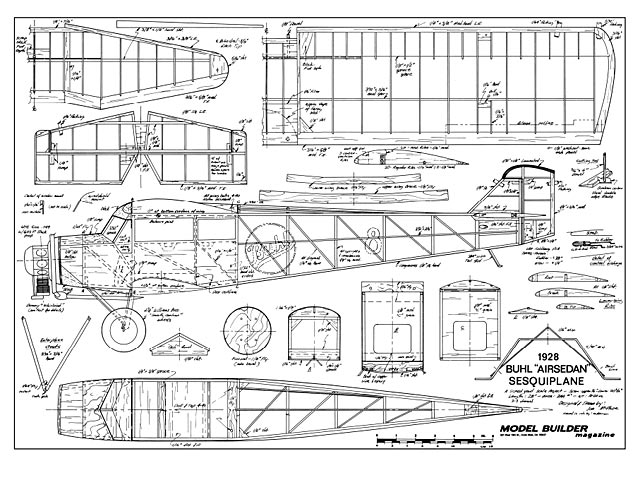 Quote: "Would you like to build a scale model that won't take three months to finish? How about one that you can fly after work at the local school yard? Read on bro', this is it! The Buhl Airsedan, by Jon McPhee.

A host of fascinating aircraft designs were spawned by the dozens of companies that grew up a long with America's infatuation with the fledgling science of aerodynamics in the years just prior to the 1929 stock market crash. The Buhl Aircraft Company, of Maryville, Michigan, was not least in putting forward some new approaches. From 1927 to 1932 the company produced a line of aircraft bearing the designation 'Air-sedan,' embracing at least eight distinct types that still shared a common, corporate look. Alfred Verville, and later Etienne Dormoy (of 1924, ultralight 'Bathtub' fame) were the designers.

These aircraft were almost unique for their time in providing indoor accommodations for passengers and pilot. They were generally powered by the reliable Wright nine-cylinder Whirlwinds, and they offered relatively high performance. Despite a lack of serious marketing, they sold well.

While the first two Airsedans were true biplanes, albeit with somewhat atrophied lower wings, later versions, including the one modeled here, were 'sesquiplanes' with one and a half wings. This arrangement looked about as useful to me as udders on a bull, with the drag of a bipe and without all of its lift. But it provides for a strong wing structure, and it also works aerodynamically. One Airsedan set a shortlived inflight duration record, with mid-air refueling, of 246 hours. Another finished sixth in the 1928 New York to Los Angeles Air Derby and 10th in the 1928 National Air Tour. Sadly, an earlier version disappeared into the Pacific during the 1927 Dole Derby race to Hawaii.

My interest in this series began with a 1965 set of British plans for the 'Junior Airsedan,' a sports car version of the aerial Oldsmobile modeled here. I flew this version free flight, and it was put out to pasture until resurrected six years ago to accommodate a recently completed Ace digital kit radio. It gave me a great many pleasant evening flights (albeit sometimes hairy due to its short tail moment), until its terminal snap roil when the wing spar gave up. The resulting 'dead duck' descent buried the engine to the firewall, but its new Silkspun Coverite kept all the parts lined up, and Hot Stuff and baking soda soon had it all back together.

I wanted to build a similar plane, with more favorable moments, and recalled an old Air Trails article on the Buhl series. Inquiries at local libraries led me to the Smithsonian Institution in Washington DC, which has the nation's best aviation library. A phone call brought a listing of available resources and copies of useful documents, especially a three-view from Volume I of US Civil Avi-tion (Aero Publishers 1962) and data from the 1929 Aircraft Yearbook (Aeronautical Chamber of Commerce). Photos are also available for scale presentations at a very fair price.

These dimensions made it ideal for a one inch equals one foot Schoolyard Scale project, and it has proved to be a delightful flyer. The long moments damp some of the 1/2A wildness, and the exotic appearance catches people's eyes. The plane flies well with exact scale outlines and areas in the tailfeathers, so change these at your own risk. The stick construction also mimics the steel tube and spruce forms of the original.

CONSTRUCTION: The construction methods detailed in this project are light, but quite strong enough. The original weighed in at 18 ounces with a heavy paint job, a tired Babe Bee, and an Ace mini-servo setup. Please don't deviate from the wood sizes or qualities shown on the plans..." 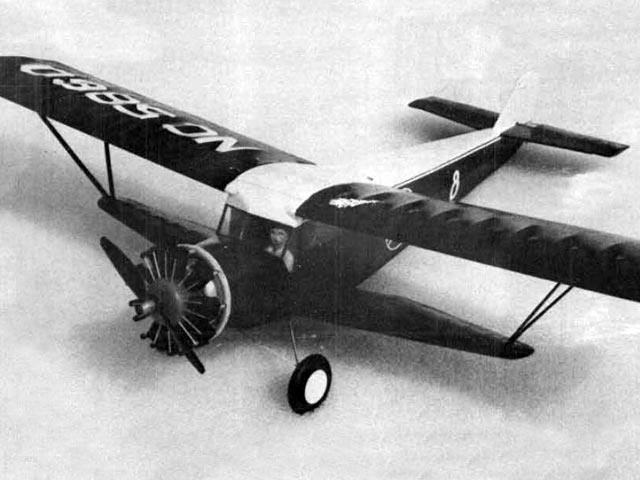