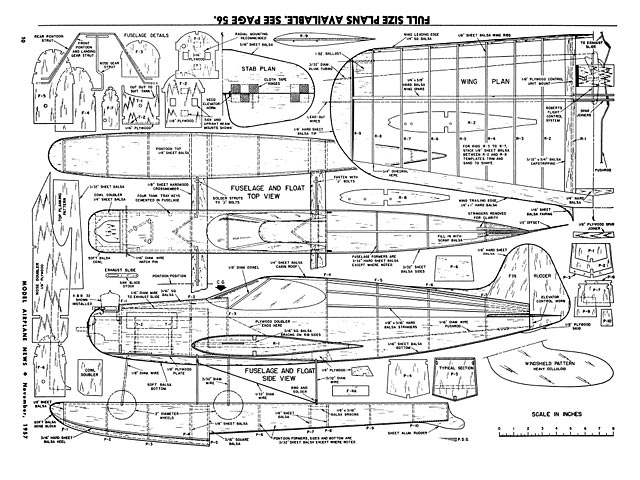 Sure Fun. Control line sports floatplane. "Here is Vern Clements Sure Fun from Model Airplane News issue 11-57. This was also the 'covergirl' for this issue so I've included a cleaned up cover scan." Quote from article intro: - "

For land or water this is the sport plane to end all sport planes! The J. Roberts flight Control System makes Sure fun dream to fly.

This sport model is controlled by the J. Roberts Flight Control System which gives you complete control over your engine speed at finger-tip command. You can fly at any speed you want, yet the control response is instant with no lag.

A typical flight with the Flight Controlled model presented is as follows: From your position next to the water's edge you signal your helper to release the twin-pontoon model. You give it just enough throttle to get on the step and let the plane skim over the water's surface. Apply back pressure with the throttle finger; the motor instantly roars to full power, a little more up elevator and the seaplane is airborne in a most realistic manner.

Now you begin feeling out the controls. It flies nicely inverted, giving a very unusual appearance with the pontoons facing the sky. Just for fun, idle down and make a low-speed pass over the water with the rudder almost touching the surface - the spectators will turn pale but you have power control at your finger-tips.

You now try several horizontal eights, inside loops, outside loops, and wingovers. The ship is very smooth on maneuvers although more sky is used than with an all-out stunt model due to a higher wing loading. Now try full idle control - the engine is now very quiet since the exhaust back pressure slide is almost closed. This adds considerable realism to the landing approach. After a slow landing speed has been reached, touch the pontoons to the water and let the plane taxi as far as you like before giving throttle and becoming airborne again. If you misjudge on the approach, you can use a little throttle and come around for another try. Yes, this is Sure-Fun."

Article pages, text and pics, thanks to pit. 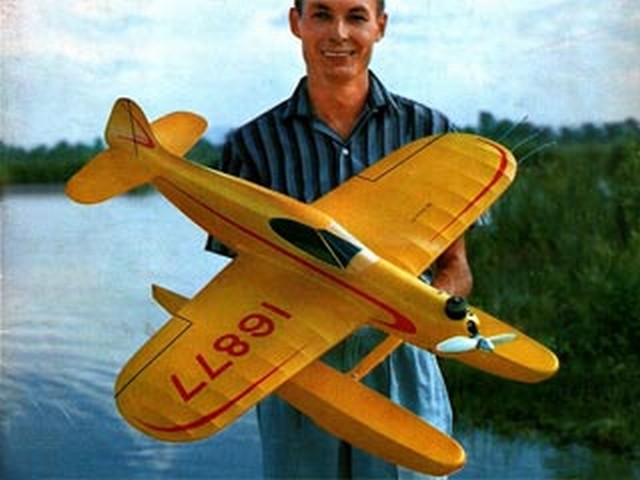