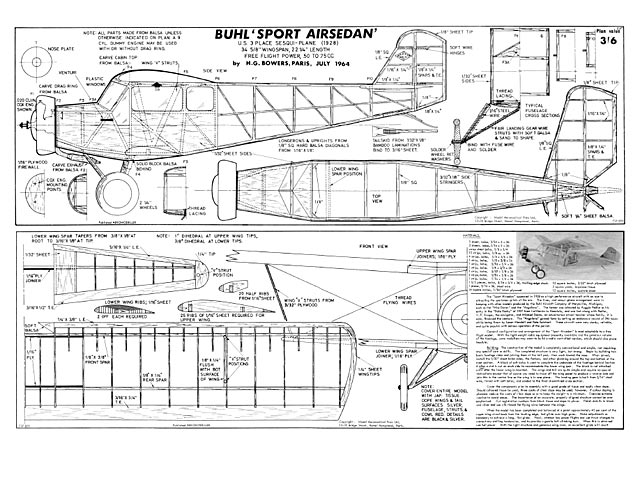 Quote: "The 'Sport Airsedan' appeared in 1928 as a high performance aircraft with on eye to attracting the sportsmen-pilots of the era. The lines, and sesqui-plane arrangement were in keeping with other models produced by the Buhl Aircraft Company of Marysville, Michigan, such as the 'Miss Doran' and the 'Angeleno'. The former was selected by Auggie Pedlar as his entry in the 'Dole Derby' of 1927 from California to Honolulu, and was lost along with Pedlar, VP Knope, the navigator, and Mildred Doran, on adventurous school teacher whose family, it is said, financed the venture. The Angeleno gained fame by setting on endurance record of 246 hours while being flown by Loren Mendell and Pete Reinhart. These aircraft were very sturdy, reliable, and quite popular with serious operators of the period.

General configuration and arrangement of the Sport Airsedan is most adaptable to free flight model. With the light weight radio equipment presently available and the generous volume of the fuselage, some modellers may want to build a radio controlled version, which should also prove feasible.

Building: The construction of the model is completely conventional and simple, not requiring any special core or skills. The completed structure is very light, but strong. Begin by building two basic fuselage sides and joining them at the toil post; then work toward the nose. When joined, install the 1/32 sheet balsa sides, the formers, and other planking around the top and bottom of the nose section. A block of soft balsa is used to complete the underside of the fuselage behind Section 4 after a slot is cut on each side to accommodate the lower wing spar. The block is not attached until after the lower wing is mounted.

The wings and tail are quite simple and require no special instructions except that of course you need to trace off the wing panel to produce a reverse side and join this in the centre line so the wing is in one piece. The landing gear is built from 1/16 steel wire, faired with soft balsa, and sanded to the final streamlined cross section.

Cover the components prior to assembly with a good grade of tissue and apply clear dope. Should coloured tissue be used, three coats of clear dope may be used, however; if colour doping is planned, reduce the coots of clear dope so as to keep the weight to a minimum. Exercise extreme caution to avoid warps. The importance of an accurate, properly aligned structure cannot be over emphasised. Cut registration numbers from block tissue and dope in place. Finish details in black and silver and use silk thread for flying wires between the wings.

When the model has been completed and balanced at a point approximately 40 per cent of the upper wing chord back from the lending edge, test glide over high grass. Make adjustments as necessary to achieve a long, flat glide. Next, attempt low power flights and use thrust changes to correct any stalling tendencies, and to provide a gentle left climbing turn. When this is obtained use full power. With the light structure and generous wing area, an excellent glide will result. " 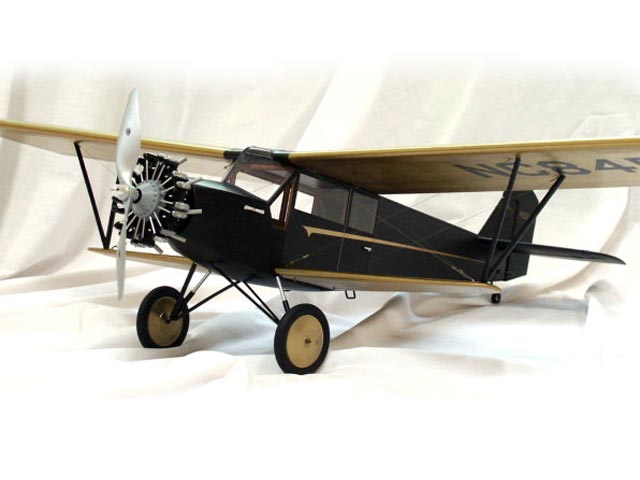