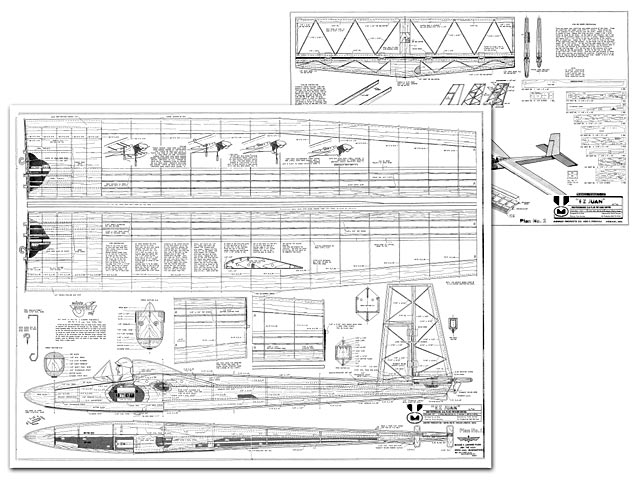 Quote: "One of the first American produced, high-performance soaring glider kits to hit the market at average consumer prices, has just been introduced by Midwest Products Co., Hobart, Indiana. Priced at $29.95, the nine foot span soarer is called the "EZ Juan" (pronounced "Easy One"). Le Gray, Canoga Park, California, a prominent R/C soarer (LSF No. 009. Level 3) and full scale glider pilot, also the 'MC' for The Model Builder's R/C soaring column, was the designer. The ship lives up to its name in being very easy to build, without any sacrifice in appearance or performance. When you read Le's article elsewhere in this issue, you'll see that the multi-spar wing construction was not devised as merely a place to hangMonokote, but rather, to provide turbulator action for a more efficient airfoil. The fuselage has rather squared off lines, but is designed in such a way that it's functional simplicity is most appropriate. Tail surfaces are designed for warp resistant strength and smooth covering with a raised frame about the perimeter. The big aerodynamically balanced rudder is a must in R/C gliding and is particularly useful in slope soaring, where turns are often, of necessity, rather tight and close to the ground.
The Midwest kit is very complete, with all strip and sheet wood of high quality Micro-Cut Midwest balsa. The die-cutting is very accurate and though a few pieces showed signs of "smashing", none of it affected construction of the final results. The hardware included with the kit is very complete; clevises, hinges, pre-bent wing joining rods, and the aluminum tubing sockets are all provided.
Anyone taking a look at the kit as a prospective buyer should keep one thing in mind. The plans make the plane look more complicated to build than it really is. They're too busy. Dotted lines and grain lines superimposed on each other take a while to sort out..." 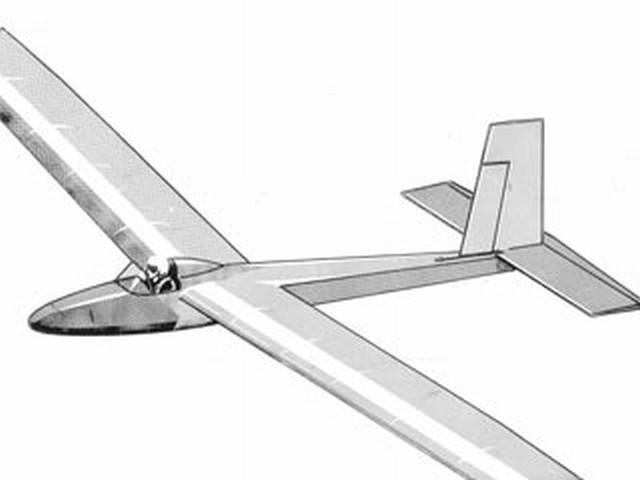