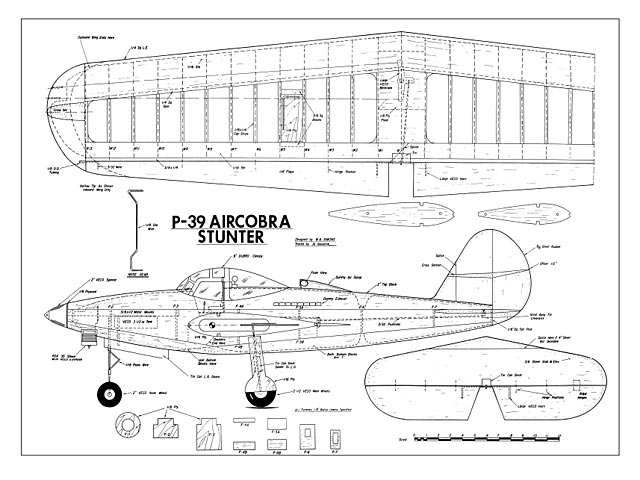 The Bell P-39 Aircobra has been a long time favorite of mine and I have been wanting to build one for quite a while. After losing about a dozen contents, mostly by bad landings. I finally decided to build one. The Aircobra with its tricycle landing gear makes landings a breeze and practically goof proof.

A few modifications had to be incorporated such as enlarging wing and tail surfaces and stretching the fuselage, but it still retained the classic Aircobra look about it. So much so that in one of our local contexts, I was asked to enter it in Scale. 'What?' I said, 'You cant be serious, this is a stunter, not a scale ship. I wouldn't have a chance. Thanks anyway.' I said, and went upon my way. Then I spied Harold Price run over pick up his ship (a semi-scale 'Tempest' stunter) and plunk it in the middle of the scale circle. Not to be outdone by Harold, one of my flying buddies and arch-rivals, I followed suit. We were competing against Homer Hudson's Nats winning P-51 'Sharp-Shooter,' a real beauty. 'Ridiculous' I said, but I kept on polishing anyway. Homer saw this, laughed and said. 'I think I'll try a loop or something. I'll need the extra points to beat you guys.' We all had a good laugh about it. Due to the lack of entries the 'Aircobra' came in a close second. Beaten by only 500 points. Oh well you can't win 'em all. We all had a good time at that meet.

The 'Aircobra' has always garnered highest appearance points. In some meets, it was awarded 40 points which we gratefully accepted. I felt like a sneak thief, but points are points. In all the meets that it was flown in, it has never failed to win a trophy. Some I feel I didn't deserve, some I did. This seems to be the main fault in Stunt. As long as the judging is by human impression and not mechanical, as in Speed, it will remain this way. I don't think that it will ever change. Many methods have been tried, some very good too, but you still have that old bugaboo, human error..."