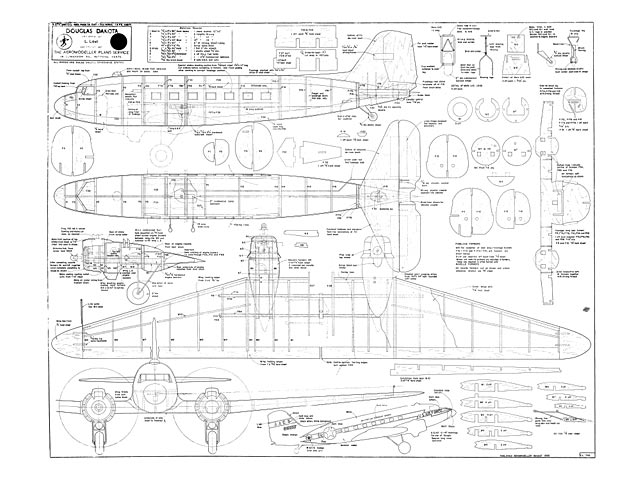 Quote: "THIS MODEL represents the combined efforts of AEROMODELLER Plans Service's brightest stars in multiengined control line scale model design, whereby J. Last (well known for his DH.88 Comet) was commissioned to design a true scale 'Dak' for Maurice Bodey to build. As those who witnessed the flying scale events at the recent National Championships will agree, the flying of this Dakota was the outstanding feature even though it could not match the extensive detail of some of its competitors.

We do not have to extol the virtues of the DC3 here, for they are too well-known. The dear old Dakota has for so many years been the stand-by of Airlines large and small throughout the world, as well as being a prominent transport in World War II, playing a very important part in the invasion of Europe.

For the scale modeller it lends itself to a greater variety of colour schemes than any other type we can call to mind, Maurice Bodey chose the unusual Philippine Airlines decor and on the plan we show what is probably the brightest C-47 in the American forces, recently based at Bovingdon, Hertfordshire, and which is used for the AACS (Airways Air Communication System) Branch of MATS to check instrument flying aids at various air bases. Its bright day-glo orange, white, blue and silver colour scheme are most attractive. Many other colour schemes can be found in the 'BP Book of Airlines' and we are sure that the majority of modellers will be able to locate a Dakota at their nearest commercial aerodrome to sketch a local subject.

The prototype model flies extraordinarily well on either of its two AM.15s, but it should be emphasised that it is definitely a twin-engined model and not one for single installation with a dummy prop. Stage-by-stage photographs illustrate the simplicity of the structure, which only diverts from true scale in the size of the upper cowling intakes in order to fully hide the model engine cylinder heads.

Construction details follow in abbreviated style and the design is to be recommended to anyone with the experience of at least one successful control line model.

Heading shows how well the 'Dak' was demonstrated by Maurice Bodey at the Woodford and Nationals meetings on a pair of AM 15's. Close up at right illustrates the slight adjustment from scale, to enclose cylinders in enlarged carb: intakes over cowlings..."

Update 11/11/2020: Replaced this plan with a clearer copy, scanned from fullsize, thanks to GuyColeman. 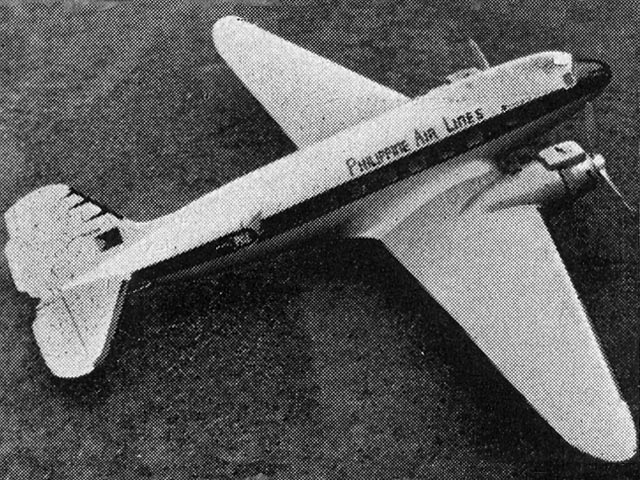