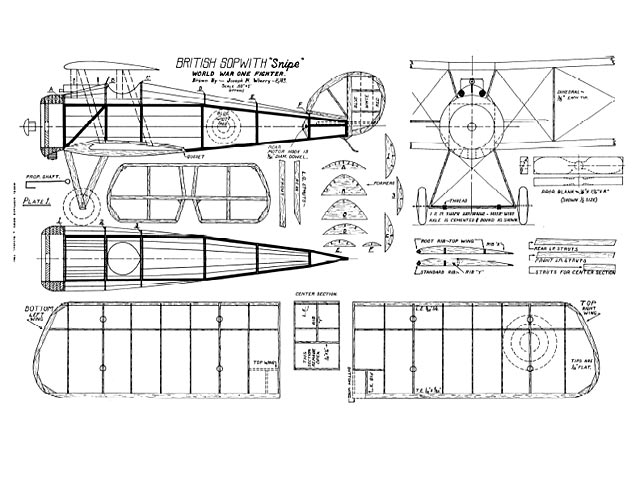 Quote: "YOU fellows who still enjoy building scale models of World War I aircraft will now be able to build a flying model of the ship acclaimed by many as the finest of all fighters of that time. As far as the author knows, this is the first time flying scale plans for the Snipe have been made available in this country.

Here are a few reasons why the Snipe was such a fine fighting mechanism. It was developed after the successes of its forbears, the Pup, Tripe, Camel, etc, and was originally equipped with a 230 hp Bentley rotary; later with an ABC radial engine. The Snipe could do at least 135 mph, climbing better than 1000 ft per minute. The ship was very maneuverable and possessed fine visibility because of its open center-section in the upper wing.

Just one instance of the Snipe's excellence is the occasion in which Col Billy Barker once found himself when on a lone patrol. The Canadian Ace ran into one of Jerry's flying circus outfits numbering 60 fighters, and not to be outdone he fought an outstanding battle shooting down 7 before serious wounds forced him to withdraw. Yes, the Snipe was a mighty fine fighter and when it appeared at the front in the spring of 1918, the Huns, were just as unhappy about it as they recently were about the new P-47, P-51 and Typhoon.

Now let's get down to facts and turn out some models of this fine British fighter. If the following instructions are implicitly followed there is no reason why you can't have a beautiful, fine flying model of which you can be justly proud. First of all you will be well repaid if you study the plans before starting construction. Take your time and be accurate from start to finish. Construction is all balsa except where noted in the text, and all dimensions can be determined by placing a ruler on the part in question..." 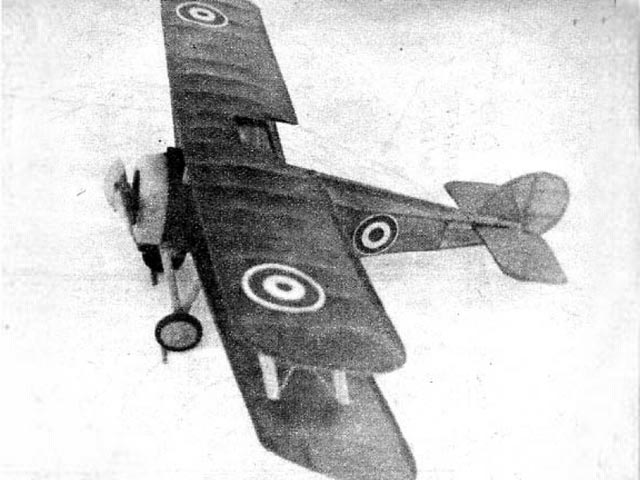 Hi Steve, This plan also appeared in the April 1996 Airflow newsletter, from the Glastonbury* Aeromodellers. Judging by the writing style, it was edited at the time by the inimitable Vance Gilbert. Who else would write "...models were to be powered by pickled earthworm entrails." Here's what Vance had to say about the Snipe plan: "Here's a WWI ready ship, the Sopwith Snipe, that would be a good planform to test your biplane buildin (sic) skills!! Make your motor peg around the center of the roundelle (sic) and you may not need more than 15% motor (auuuuuuuugh)** to get this thing what wit (sic) its oh so short nose to balance where it oughta. Would shrink nicely to peanut too. What a great change of pace from the Fokker DVII's and the SE 5a's that usually litter the front line of a mass launch!" Lincoln. *that's Glastonbury, Connecticut, USA. **Elsewhere in the newsletter is discussion of controversy regarding the 15 percent rule.
lincoln - 17/01/2013
Add a comment