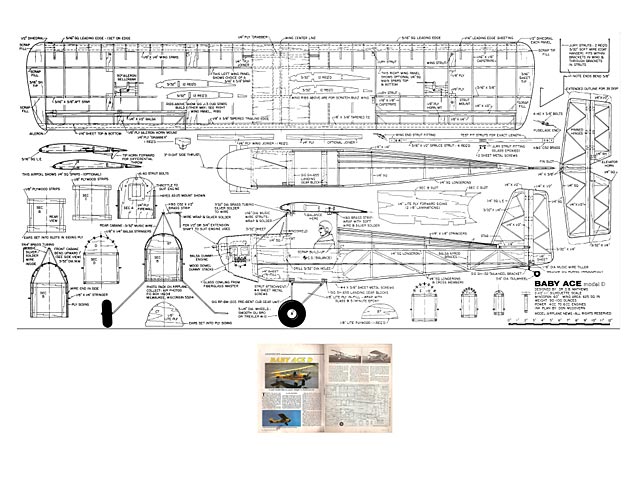 Quote from article: - "A scale model that is a pure delight to build and fly, by DB MATHEWS.

THE BABY ACE, by OG 'Ace' Corbin, was originally developed in Topeka, Kansas, in 1929. Closely following the design parameters of the Heath parasol, the Baby Ace was intended to fill a market segment for a single-seat sport aircraft. Production was moved to Wichita, Kansas, in 1930 and a cabin version was developed. Sales were slow and Corbin subsequently moved his operation to Madison, Wisconsin.

Only six were actually built, with others available in kit form. Note this early version differs markedly from our model, most notably in the shape of the empennage and wing tips. The reason for this is that in 1953 Paul Poberezny acquired the rights to the Corbins and, with former WACO engineer Stan Dzik, redesigned the old Ace into the model C. This redesign was published in 'how to' form in Mechanics Illustrated in 1956 and really put home-building and the Experimental Aircraft Association (EAA) in motion.

When the demand for plans and kits exceeded the time available to the EAA, the rights were sold to Cliff DuCharme of West Bend, Winsconsin. His Ace Manufacturing company again redesigned the Ace, into the model and made kits available.

Many Baby Ace D models have been built both from the kits anfrom the plans, they are common sights at most fly-ins and modifications in fin shape and colouration run rampant.

Presumbaly it's a little unusual to suggest a scratch-builder purchase a ready cut and numbered wing kit. However, if you're put off by cutting ribs and such, I designed the Baby Ace D around SIG's RP-BK-203 wing kit. All that is required to complete the wing is a new 1/4 inch ply joiner, two ply center ribs and new mounting plates for the struts. For the pure scratch builder, I've shown an alternative wing rib with the spars on the outside. In all other respects, the wing is the same." 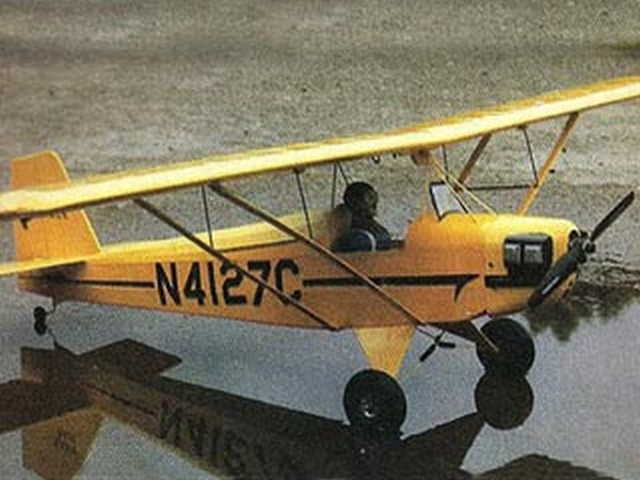