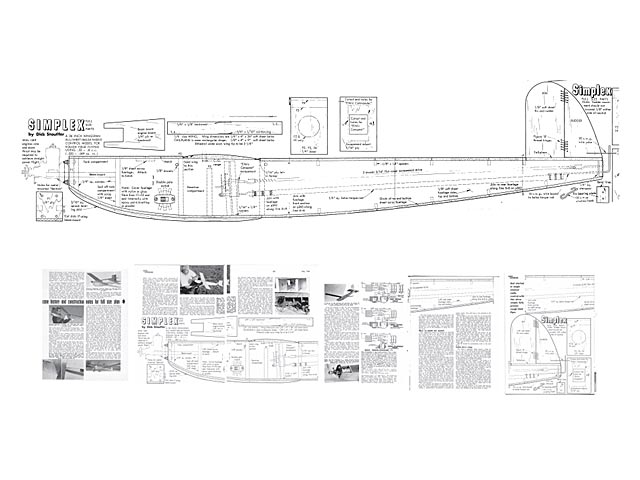 Simplex. Aeromodeller May 1964. Simplex 36in span all sheet balsa R/C for rough field flying. Wing and tailplane are sheet balsa, dimensions are given on the plan.

Quote: "DESIGN PHILOSOPHY of the 'Simple Simon' series of radio control models, leading to SIMPLEX starts with Simple Simon Mark II which was a direct two-times enlargement of Mark I, published as Simpleton (oz3390) in AEROMODELLER, January 1963. Because the Simpleton II seemed to have interesting attributes it was decided that a radio version would be 'easy'...

From the structure of Mk. IV, next development was SIMPLEX which carries back to Simpleton through these evolutions. Very straight forward, very functional and in a time proven tradition.

The thin, high aspect ratio wing, for maximum performance, is common to the series. The stubby tail is as simple as it can be. The long nose and tail moments were proven in the Mark IV configuration. The lack of landing gear goes back to the skids of the Wright Bros, as embodied in Mark II and III. Use of minimum number of bulkheads also reduces weight, and construction problems. Having the R/C gear readily removable for repair or adjustment was found to be very desirable in all previous models. In SIMPLEX the units, and the wiring harness, are all removable for inspection. The shoulder wing was proven in Mk. IV as well as the close coupling of thrust and drag moments.

This model maintains a positive ground speed, even in the glide, in 20-25mph winds. From the first flight, when the model flew under a very rich engine setting and moved out smartly in the 20 m.p.h. wind, its future looked bright and promising for a simple, uncomplicated, rudder only, 1/2A power, radio control model.

Under power, the flight was straight out and fast with a shallow climb. Rudder reaction was positive - left and right - but not abrupt. There was no tendency to go into wild gyrations. SIMPLEX holds a moderate bank without dropping the nose - a full 360 deg. is required for the model to develop a spiral." 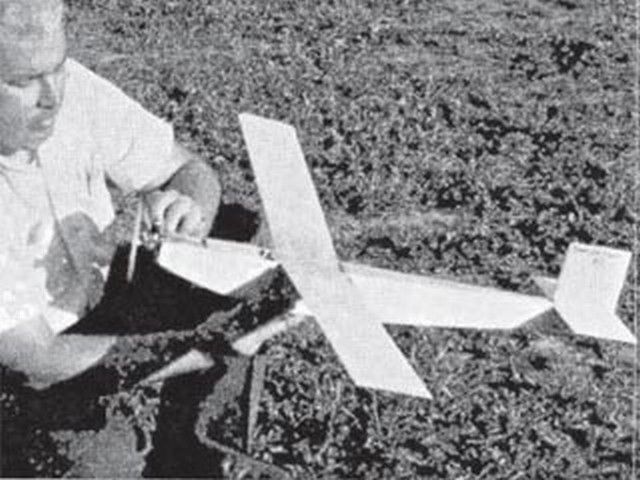