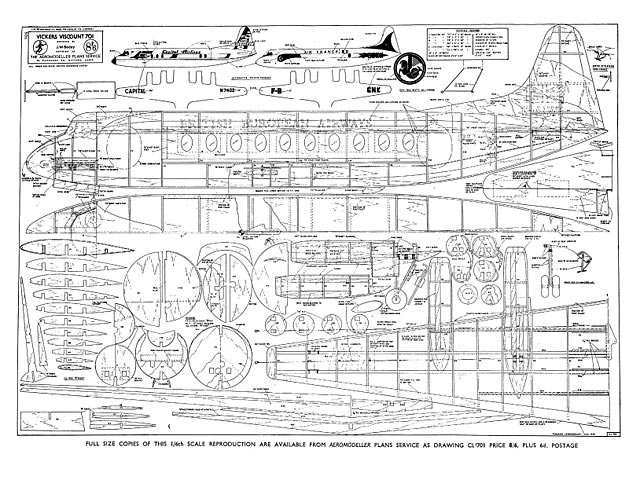 Quote: "A superb plan for this famous turbo-prop airliner to suit a wide variety of engines. Vickers Viscount, by JM Bodey.

AT LAST! AFTER YEARS of requests we are able to provide our readers with a four-engined control-line model - and what a model!

The Viscount needs no description, its fame is widespread and its flying virtues so widely extolled, that it has become the yardstick of Turbo-prop design and its flying surface outlines can be seen (with variation in sizes) on the latest from the USA and USSR.

JM Bodey's model is similarly famous in the North-Western Area and demonstrations at the Stockport Express meeting have shown how he has developed a perfect multiple engine model with minimum of constructional fuss. In fact the Viscount is almost a beginner's project - if any novice should own four engines!

The original uses a pair of 2.5s and two 1.5s, but any combination totalling 7 cc is sufficient power.

Commence building by first laying down the 1/4 in sheet fuselage crutch on the plan, followed by all formers except F2, F7-F16. Next cement in the half cabin floor and before removing assembly from the plan, add complete cabin sides, steamed to the curve with windows already cut out. Now, remove complete side from the plan and add formers on the other side in the same manner.

Next, thread half formers F9 and F10 on a piece of 1/2 x 3/8 in bearer and cement in correct position on cabin floor, followed by the remaining lower fuselage formers which should not be cemented to the crutch at this stage. The front u/c bearer and F2 can now be cemented in place as can the tailplane platform and small squares of acetate for windows. The bellcrank pushrod, and simple laminated sheet tailplane are fitted, then add fin base R3 and fin post R2..."

Quote: "...from Aeromodeller July 1958, I used it to build a weathervane [pic 003], been flying 15 years, all fibreglass, aluminiun, thin sheet steel. Took about 15 lb lead in the nose to balance on CG, which you have to do to make it weathercock reliably. About 6 ft span, engines are polished soft drink cans, stainless steel props spinning on minature dual ball races, from old pc hard drives." 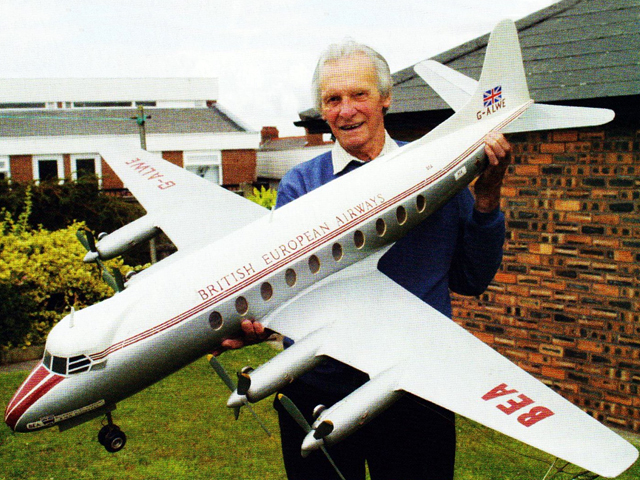