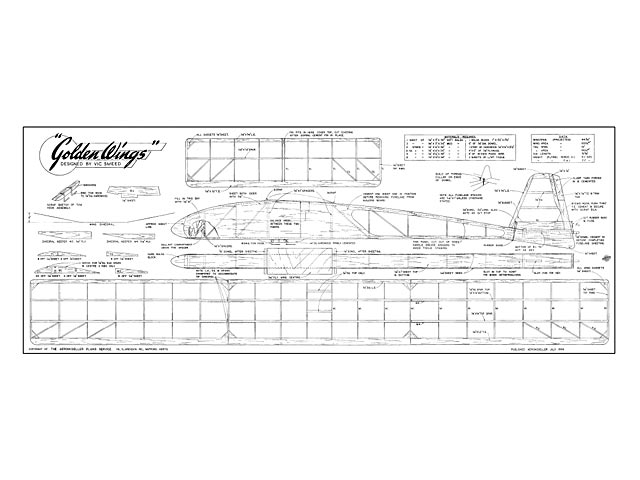 Quote: "Juniors - enter our A/1 glider contest with... Golden Wings. This ideal design for the beginner by Vic Smeed described in detail by Rev F Callon. TO THOSE OF YOU who have been modelling even for a short time the name Vic Smeed will already be familiar; but to the absolute newcomers to the hobby I'd like to introduce an aeromodeller off the very top shelf with a long list of successful designs to his credit, including the famous TOMBOY beginner's power model, thousands of which have been built over the last few years, and which brought in letters of congratulations from all over the world. So you can start work with every confidence on this good-looking little sailplane, hot, so to speak, from the Smeed drawing board!

Fuselage: Cut a sheet of 1/8 balsa into three lengths 1 in wide and a similar 1 in wide strip from a sheet of 1/16 balsa. Sandwich the four strips together and sand along the edges until they are square and uniform. The top and bottom of the fuselage and the intervening cross-members are going to be cut from these 1 inch strips, and as they have to stand edge-on, vertically, over the plan, about a dozen and a half gussets must be cut to prop them up in this position as shown in Fig.1. These gussets can be made from a strip of 1/2 in x 1/8 balsa, have a look at Fig. 1a.

We start by covering the plan with grease-proof paper, and laying out the piece of 1/8 x 1 in, which is to be the top of the fuselage. The curve near the nose is rather sharp, so bend it in before starting to build, by holding the wood in the correct bent position for a few seconds in the heat of an electric fire. Another sharp bend occurs below what will be the front end of the tail-plane platform. Cut and half snap it before pinning down - see Fig.2. The gussets shown here and in Fig.1 are not, of course, cemented in place, but merely pushed up dry against the wood and held there by pins pushed through the gusset into the building board.

Cut out the noseblock from 1/2 in sheet, sand roughly to shape, and cement in place against the fuselage top, and then add all the cross-members right down the length of the fuselage, using pins to hold them vertical while the cement sets - see Fig.3. Then cement the second length of 1/8 x 1 in - the bottom of the fuselage - up against them as shown in Fig.4.

The first side of the fuselage should be added now while the frame work is still pinned down. Pre-cement all the top edges of the fuselage top and bottom, nose-block, and cross-members. Trace from the plan and cut out in thin cardboard a template of the area of the rear part of the fuselage sides which has to be removed, place it carefully in the appropriate position on a piece of 1/16 sheet, so that the lower edge of the template is 1/4 in above the lower edge of the sheet all the way along, run a biro round the outline of the template, and cut out this area from the sheet. Now quickly run a line of cement once more over all the upper edges of the fuselage frame work, and firmly press the first side of the fuselage into place, using pins to hold it down while it sets. Then remove the entire unit for the plan and trim off the overlap of in. sheet all the way round.

Update 29/01/2020: Replaced this plan with a scan from the fullsize paper plan. Scan from KaoruKiyose, cleanup by Circlip. Note the excellent PDFvector plan drawn up by hogal has now been moved to become a supplement file. 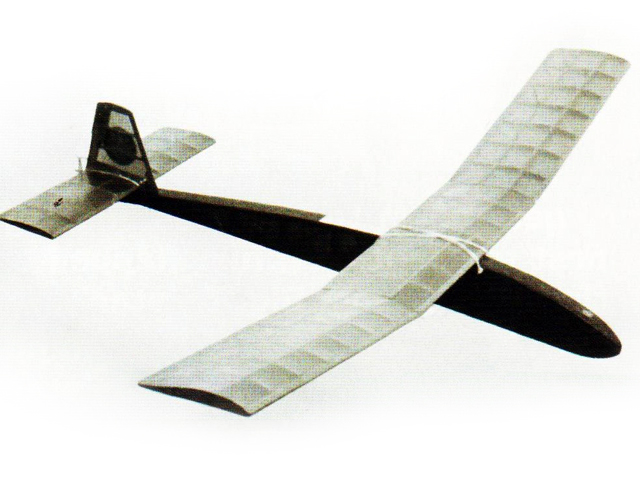