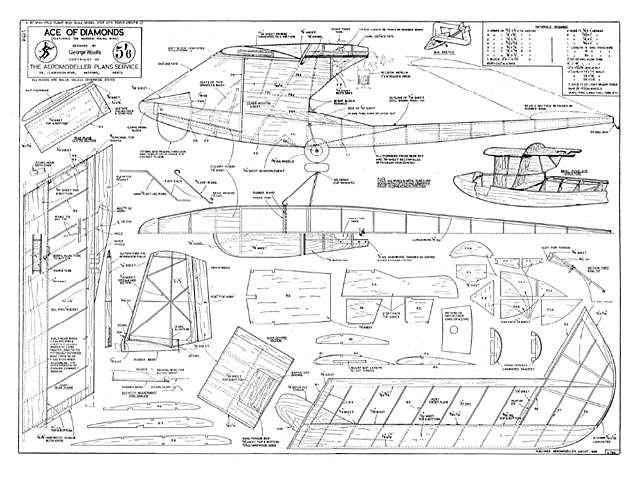 POSSIBLY MANY READERS will look at 'Ace of Diamonds', smile tolerantly, and mutter something about odd looking aircraft without other purpose than to look unusual. In order to straighten the record, let it be stated that the model is based on a full size project and appears to bear out the advantages claimed for the original aircraft.

It was back in 1926 that Mr Norman Hall-Warren ARAeS created a wing design which would be stall and spin-proof and have a very large speed range. Ex-RFC pilot and well-known sailplane enthusiast, Rex Young later joined forces with Hall-Warren and in December, 1937, a patent (No. 508022) was granted. A private backer for the building of a prototype was found, but the international situation at that time (just prior to the war) prevented fruition of the project.

Since the war, rising production costs and official obstructions (Warren states) have prevented the production of a full size aircraft.

The theory behind the Warren-Young is largely concerned with the Boundary Layer flow over the wing. One of the features of swept wings is that the Boundary Layer moves in a spanwise direction, towards the tips in the case of sweepback, and towards the root when the wing is swept forward. This outward movement normally causes tip stalling, and fences are often used in an attempt to cure this.

A study of the diagram opposite, will show how the combination of sweepback and sweepforward causes the Boundary Layer to move from the front plane centre section, around the tip and thence back to the rear plane centre section. This continuous removal of the boundary air prevents stagnation of the airflow and stops the lift from decreasing at angles of attack greater than that of maximum lift, ie both front and rear planes will have a flat lift curve.

There is also a slot effect between the front and rear plane near the point of juncture. This has the effect of speeding up the flow over the trailing edge of the front plane, preventing early separation, which might otherwise occur at this position.

In addition, the relatively large chord of the wing tip spreads.,the tip vorticity, preventing an early local stall and as with all low aspect ratio aerofoils, the Warren-Young tip surface will continue to develop lift up to an exceptionally high angle of attack. In fact the stalling angle of the tip is beyond that attainable in flight and is probably well over 40°.

Another anti-stall characteristic of the Warren-Young wing derives from the fact that the rear plane is always operating at a lower angle of attack than the front plane, due to the decalage indicated by stability considerations, and also to a smaller degree due to the downwash, and the rear plane is therefore still lifting strongly when eventually the lift of the front plane starts to fall.

The stability of the Warren-Young aeroplane is exceptional, due to the large area of wing surface located with an effective arm about the centre of gravity. There is no onset of instability or upset of balance at very high angles of attack, corresponding to very low forward speeds. In fact it is impossible to spin the Warren-Young, nor in the accepted sense, is it possible to stall it.

All this means that the Warren-Young aeroplane will take-off after an exceptional short run and can be climbed very steeply in complete safety. Also it can approach a landing in an almost vertical path, with no risk of loss of balance or sudden loss of lift. The calculated figures for the Warren-Young Skycar, a two-seater, 100 hp, light plane version, are still-air minimum level flying speed 28 mph and approach and touch-down speed of about 20 mph.

Comparison or George Woolls' model with Shyear project below shows main differenee in engine and prop position, a long extension shaft being too complicated for the flying model... " 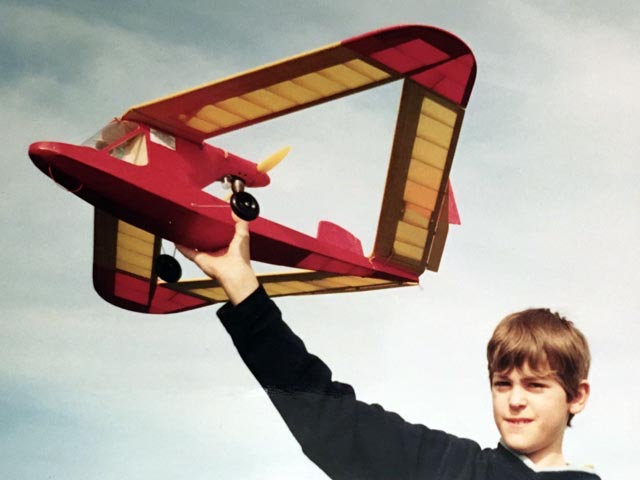