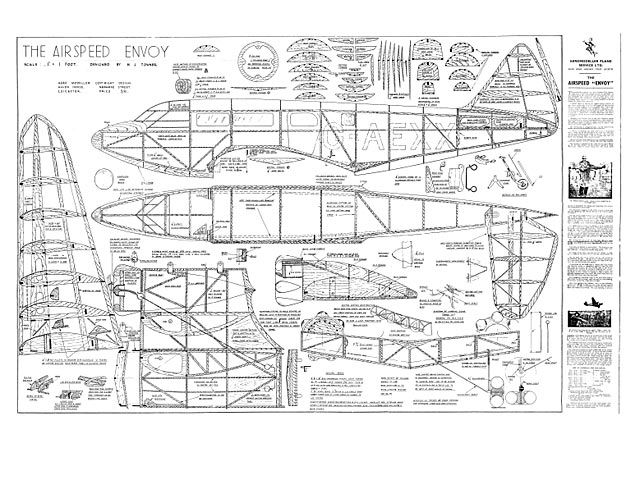 Advertised as quote: "A beautiful flying replica of the twin-engined low-wing monoplane, designed by a recognised expert in this class, and containing many interesting features. Drawing 40" x 29". Span, 52". Price 3/6, post free."

This Airspeed Envoy model is also mentioned in the book "Scale Model Aircraft That Fly" (see books area) with a photo and the caption: "Airspeed Envoy. Built by Mr HJ Towner, this 1 in to 1 ft flying scale model is one of the finest examples of the aero-modellers skill. Span of the plane is 51 in and length 34 in. The model will rise off the ground and fly quite a long way."

Quote: "THIS particular prototype was chosen because of its adaptability to a simple twin-engined layout by arranging for the rubber motors to work through the centre section ribs and thus eliminate any complicated gear or crank drive. The flexible drive in the cowlings to convert the angular drive to a parallel drive consists of a light spring which is in flexion during the whole of the motor run.

A further object in keeping the rubber motors confined to the centre section only is to keep the weight off the tail and thus saves adding weight to the nose to obtain trim. The actual model balanced correctly on completion. Naturally, only smallish motors can be incorporated, but by using long motors, any subsequent bunching does not affect the trim. As a matter of fact, 35 sec motor run is definitely obtainable, and with a wing loading of 6 to 8 oz per square foot a satisfactory performance is assured.

Although both airscrews turn in the same direction, torque is not troublesome, and any turning tendency which should be only slight is easily corrected by either putting more turns on the left-hand motor or adding a further loop of rubber. The cowls, too, can be slightly offset.

The construction is straightforward and the final line-up should be correct if the instructions are carried out.

Commence by building the main wing beam of good hard balsa. Build this on the drawing in the usual way. and then add the front portions of the centre section ribs. These six ribs are all made in two halves. Add the leading edge and well brace, thus forming a very strong box girder.

The rear portions of the ribs can now be cemented into place, connected together with the trailing edge and cross members.

The fuselage is straightforward; build the two main frames on the flat and connect top and bottom spacers as usual. Well brace where the centre section fits. The whole centre section is detachable for fitting and inspecting the motors. The attachment is quite simple.

Two aluminium spiggots on the centre section trailing edge are first offered up and rest on the top of the bottom spacer of former G.

The rest of the centre section is now brought up into place and a dowel, hard balsa, is inserted through the aluminium side plates and paper tubes in the fuselage. Note that the rear ends of ribs A extend beyond spacer G and form a register to prevent side play. The rear hook is made up out of aluminium and is a press fit on the centre section trailing edge.

The landing gear consists of a transverse 1/16 in g steel wire in one piece from axle to axle, with a further 1/16 in g steel wire well soldered to it forming a rear strut. This assembly is well bound and cemented to the leading edge and main wing beam respectively. The actual spring is imparted by this assembly, and gives an up and down movement only. A further leg is hinged immediately behind the wheel, and slides in a flexible bush (expanding curtain rod) attached to the leading edge. This leg takes no load.

The cowlings are built up of 1 in thick balsa, all joints being staggered and carved to shape. They are, of course, detachable, and first plug into the three-ply rings on the front end of the nacelles.

Note that downthrust is incorporated. The airscrews were commercial 9 inch props known as pawlonia, a hard, light wood, and work well. The boss and spinner being added.

The wing construction is unusual, but very strong. A main spar is made the full depth of the wing and slotted at the rib positions.

The ribs have the centres cut out and are also slotted to accommodate the spar. The spar is now inserted through the ribs horizontally, and then turned through an angle of 90 deg,, when the spar and ribs all lock together.

I have found on the usual type of slotted spar and slotted ribs that the cement on contraction tends to warp the main spar either up or down, but the method used on the Envoy overcomes this difficulty by having an opposing and counteracting force at each joint..." 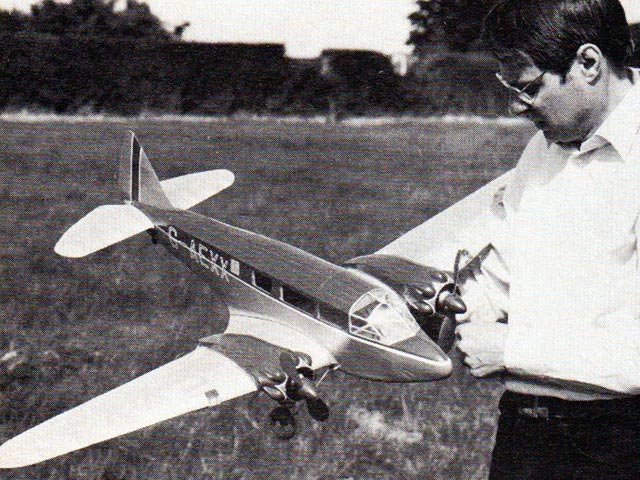 The Airspeed Envoy was partly designed by the engineer/novelist Nevil Shute Norway. The Envoy was chosen for the Kings Flight for Air transport of the British royal family and government, and by a variety of military and civilian operators.
James Fricker - 14/02/2021
Add a comment