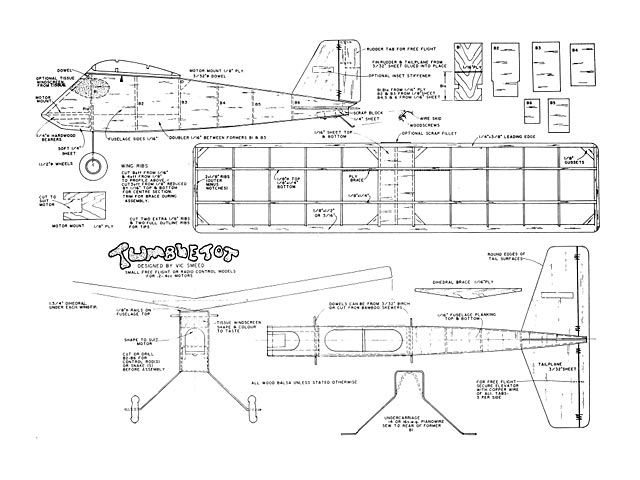 Let us first explain the name. If you have any connection with children around three years old, you will probably know of 'Tumble Tots', a chain of playgroups initiated some twenty years ago with an emphasis on kindergarten gymnastics and, from personal experience with a grand-daughter, a very good institution. Since this model is very small and designed to cope with the rough and tumble of (almost) all-weather flying, it seemed appropriate to base its name on similar precepts to the playgroups, with, of course, due acknowledgement.

Once again the design originates from a request from Mike Parker, this time for a small, easily-built model suitable for throwing in the car, to be taken out if weather conditions are a bit too poor to risk flying larger or more serious models. Alternatively with present day radio being so small, an R/C version would be entirely practical, if perhaps a shade lively. Older modellers might remember Percy Norman's Natsneez (oz2251), a stubby little model very small for its time; while this one isn't anything like as complex or heavy, and doesn't have a spark ignition engine, the concept is much the same, on the lines of the smaller the tougher.

Recent years have seen the growth of the very small diesels, ie under 0.5 cc, most of which have been scaled down from successful standard engines and the majority imported from Russia, where redundant high quality steels etc from the space programme have provided a ready source of materials. Examples suitable for this model include the Mills 0.25 cc, the half-size Elfin and ED Baby and the Kalper, at its original 0.32 cc size. At the time of writing, there has been a slow-down in deliveries, believed temporary, but a lot of these and other 0.2 to 0.4 cc engines are in circulation.

In Britain the AE 0.2 cc is no longer being made and there is a long waiting list for the superb scaled-down Mills motors from Derek Giles, but interest appears to be increasing in other countries and the Parker prototype Tumbletot [see morepics 006] has a German Schlosser 0.25. This remarkable little engine has been described as looking like a scaled-down Oliver and it is certainly of very high quality - it even has a twin ballraced crankshaft! It swings a 6 x 3 prop and is really rather too powerful for this model, although with the prop on back-to-front and a fairly rich setting to throttle it down, it is safe enough. Production is understood to be somewhat limited and the price reflects the quality, but batches do become available for import from time to time. If your taste runs to glow motors, incidentally, there are still a good few Cox .010 and .020 around and the model should handle these quite happily.

Contructionally, there is very little to say. The wing is conventional and quite straightforward, but with only one break, giving a V-shape which sits on two 1/8 in square runners cemented to the fuselage top. If you wish, a bit of fiddling with odd scrap can tidy up the leading edge/fuselage joint with a little fillet, but this would be unlikely to have a discernible effect on flight performance.

The tail surfaces are all sheet, preferably medium hardness, light but stiff stock. If insufficiently stiff, short inset pieces should be set across the grain to help prevent warping. Radio rudder and elevator are shown but for free flinht, a smaller rudder tab should be used, as dotted line. This and the ele-vator require 'hingeing' with copper or soft iron wires, or aluminium tabs, so that they can be bent slightly to adjust flight trim. Once a satisfactory flight pattern has been achieved, a light touch of cement is advisable to stop any accidental movement of the settings.

The fuselage is simple box with few additions. Mike found it convenient to cut a card template for the sides..."

Quote: "Hi Steve. Here's my second attempt at cleaning up a plan with Photoshop. It's the late, great Vic Smeed's 'Tumbletot'... I copied the plan using my (reasonably decent) digital camera and cleaned it up in Photoshop ...the Tumbletot plan is no longer available from the original publisher (AMI) nor, as far as I can tell, from anywhere else. I thought it should be with you in the Outerzone archives for preservation ...I haven't built the Tumbletot yet, but plan to do so as soon as I get some time. It is, I believe, Vic's third to last design before he died - his Soubrette (oz8891) and Lola came after it. It looks like a pretty cute and somewhat different little thing. I particularly like the delightful 'crudeness' of some parts of the drawing, which indicates that Vic probably drew it up himself, with pencil and ruler, on his kitchen table." 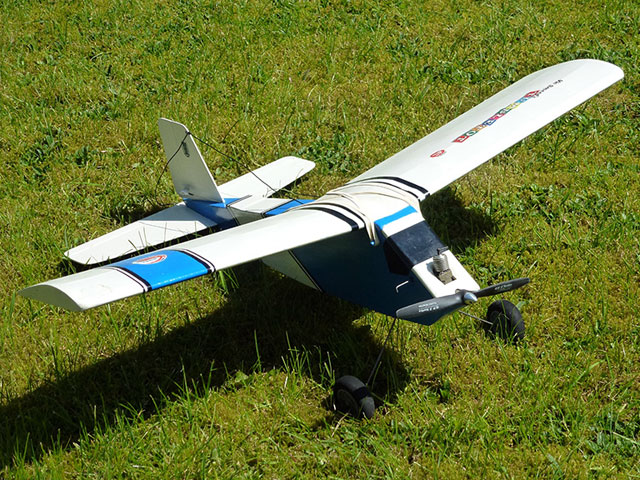 Hi Steve, Here is a photo of my Tumbletot built from your plans and converted to R/C electrics [see more pics 003]. Flew OK, nothing spectacular. Probably too heavy for R/C in this size but I'd guess it would be fine at 150% (36" span) or 200% (48" span). A little less dihedral would help as she did a lot of dutch rolling at low speeds. Keep up the good work.
Bill - 22/11/2014
Please find attached 3 photos of my version of Vic Smeed's Tumbletot [model photo & more pics 004, 005]. The plan (free from RCME mag) was scaled UP to 27" wingspan to suit my Boddo-Mills 0.5cc engine. Please feel free to add the photos to the relevant page of your Outerzone site, plans from which I am continually finding extremely useful as reference when creating my own designs.
GeoffP - 12/12/2018
Hi Mary, Am sending a few more details of recent builds. This one is the Tumbletot oz3708: built for an RCG project late 2016 [more pics 007, 008]. I was captivated by the basic design of this model, but a little concerned re comments of an indifferent performance of the original. I decided to make some radical changes, I trust not too radical for your listing. I increased the size to 36" span from the original 22" and went with four function electric powered rc rather than freeflight. I'm pleased with the result, it's a quirky little sport model, easy to fly and has a mild aerobatic performance.
Alan Wooster - 28/08/2019
Add a comment