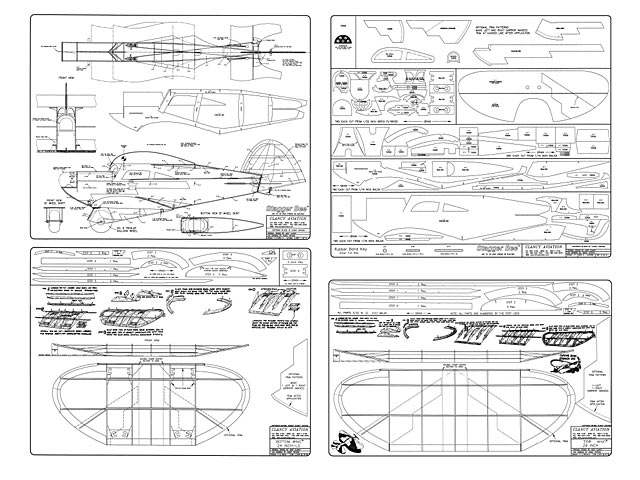 Ever since I was an elementary school student, the Stagger-wing Beechcraft has been my most favorite airplane. A little yellow pot-metal version always enjoyed a special place on the shelf when it wasn't making a flight from the kitchen table, around the living room floor lamp, to touchdown at the airstrip in the back porch. That plane has a kind of special classic grace shared by few other aircraft designs. And then we saw Andy Clancy's Stagger Bee. In this very unique style he has somehow captured that special look.

Clancy's Stagger Bee is designed to fly with a .061 2-stroke to a .30 4-stroke glow engine. On the other hand, if you are into electrics, it also flies with a 10-25 amp, geared electric motor. Both the glow and electric versions are covered in detail on the four plan sheets and in the 18-page building instruction booklet. The kit includes Trexler main wheels, pushrods, ply control horns, wing hold-down elastics, a tail skid, and some clear heat-shrink covering material. All of the parts, other than wing leading edge, struts, etc, are die-cut. Most fall out of their respective balsa sheets easily. All of the parts are shown full-size on a page of the plans, so the first step is to push out parts and label them. A light edge-sanding will square off the edges nicely - especially on the wing ribs.

Building: Only the fuselage, tail feathers, and wheel pants are discussed in the building instructions. Assembling the wings is adequately shown in the plan sheets so written words aren't necessary. Building the fuselage involves adding a variety of doublers on the inside of the left and right fuselage sides. There's nothing to do in preparing the sheet stab/elevator except adding the small doubler at the center of the elevator. Incidentally, if you have never tried the Modela modeling pins pictured in the instruction booklet (available from Clancy Aviation) you should give them a try. With a large plastic head for easy gripping, their diameter is smaller than a normal straight pin and they are a lot sharper. That means you can stick them through thin balsa strips without cracking the wood. We use them all of the time.

While the Stagger Bee's assembly instructions are very complete, we found that we had to take the engine installation a bit further. The instructions show a small .19 mounted on the firewall bulkhead. When we prepared to install an OS .15, however, installing an engine mount onto the firewall put the engine too high. It also made the engine stick out too far. Our approach was to add a typical 'U' shaped engine mount ply plate cut out for the engine.

While we found no problems in building the plane whatsoever, we did make a few personal preference mods. And, because Andy Clancy designs so light, adding a little weight here and there is seldom a problem when it comes to flying his designs.

Andy Clancy likes to make his planes 'crash proof' by using lots of elastic bands. According to the plans and instructions, the wings, stab/elevator, and main gear are held in place that way. We prefer to glue in the stab so we did ours that way. In checking the plans we also noted that the elastic-mounted main landing gear seemed too far forward. While that's ideal for flying off grass (to keep the plane from nosing over on touchdowns and on the take-off roll), experience has taught us that having the main gear too far forward on conventional gear planes can make for tricky ground handling when flying off blacktop.

To avoid the potential problem, we modified the wheel pants so they screw to the bottom wing. Ply doublers were added to the wing to make a strong mounting plate. A ply top was used on the wheel pants with the top front edge of the ply extending about 1 in forward of the front of the wheel pants. Two hold-down screws are used at the front. A balsa block was also added inside the wheel pants aft of the rear bulkhead to prevent crushing with the rear hold-down screw we installed. For blacktop, we found the best location is when the axles are 2-3/4 in back from the leading edge of the bottom wing. With this 'bolt on' approach, the gear can be adjusted according to your preference. Or, they can be moved if you decide to fly off of grass. We also added a steerable tail wheel rather than using the tail skid as designed.

While Trexler wheels are included in the kit, we were disappointed to find that we couldn't use ours. Somehow, one of the wires was off-center on the hub such that it made the wheel too wide to fit inside the skirt without rubbing. We tried sliding the tire around on the hub and whatever, but it always ended up the same when blown up. While we know that Clancy Aviation would have been happy to replace the wheels had we notified them of the problem, we just used regular lightweight wheels — which worked out fine.

Radio Installation: Like all of the construction, the radio/linkage installation is also a snap. Two micro servos were used for the rudder and elevator and one of the super-tiny 2-mounting hole servos was used for the throttle. The receiver was mounted in a foam rubber nest in a balsa box we added on the fuselage floor just aft of the bottom wing opening. The 225 mAh battery pack fit in behind the firewall under the fuel tank..." 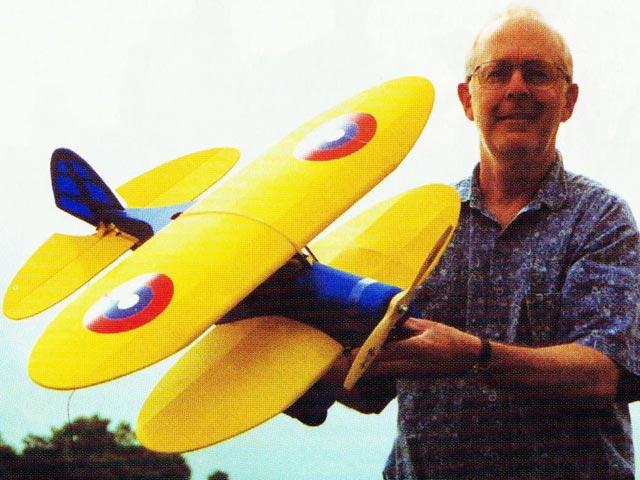