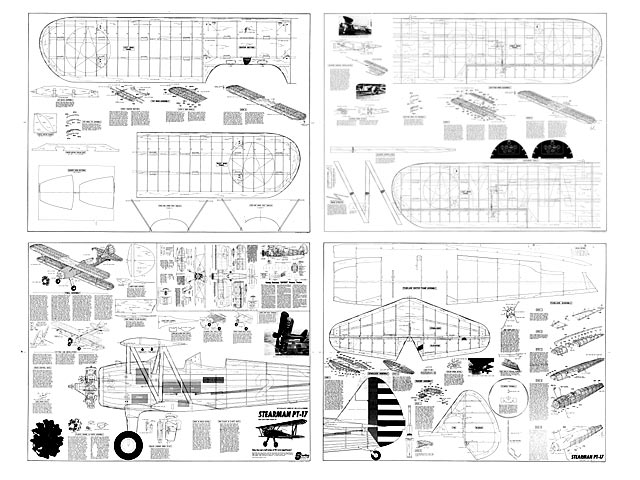 Quote "This is another heroically found plan. The Sterling PT17 radio control version which was a kit that went on sale in 1967. As with all Sterling models, lots and lots of rather hard balsa, plywood, not very nice plastic parts, excellent decals and beautiful plans with plenty of sketches and lots of writing. This model flies extremely well but it needs a rather powerful engine because it is heavy and big. If anyone has the formers, they are welcomed. This plan finding is just half the battle won but worth having".

Quote: "Hi Steve, recently I bought at an RC flea market a Sterling PT-17 64in kit for 50 euros only. Inside, along with the plan there is an amended plan for the interplane struts, wrong in the official plans. It's necessary to add it in your plan set... thanks in advance, Pit."

Quote: "Field and Bench: Sterling's PT-17 Stearman, by George Plumer. Interesting and intriguing combination of model kit, radio equipment, and engine for checking in our Field and Bench section. Beginner or experienced pilot will profit from it.

When Sterling Models introduced the STEARMAN PT-17 last year, I am sure many modelers rushed to the local hobby shop to take a look at the kit and plans, especially the many scale fans. I know I did and came home with a kit and ready for lots of building. Coincidently, Walt Schroder called the same night to tell me that arrangements had been made with Ed Manulkin of Sterling to send me a kit for a Field and Bench article. In addition, he informed me that arrangements had been made with Bill Deans for a new Deans proportional and the power source was to be a Webra .61 supplied by Roy Gelber of MRC-Webra. I hadn't thought of the radio equipment and power plant and here were both on their way. Don't misunderstand, the radio equipment is supplied on a memo bill of lading and can be bought by me or returned to the Deans Company. I wonder if I can persuade the team manager that this is just what I need for Xmas.

The first thing most modelers do when they buy a kit is to look at the quality of the wood and die cutting. Sterling's ad in the model magazines said the wood in the kit was density graded. I found this to be true throughout most of the kit. Pieces such as leading and trailing edges as well as spars for both wings were all of approximately the same weight and density. The leading edge sheeting for the wings was of similar density as well as the die cut sheets of ribs and fuselage bulkheads. The balsa die cutting throughout was very sharp and clean with no trouble punching out the parts. Some plywood parts did need help from a razor, mainly those with irregular shapes such as bulkheads. Square and rectangular shaped plywood parts punched out almost as easily as balsa parts.

Construction was started with the stabilizer and elevator. Building these parts is quite simple and takes just a little longer to build than a Taurus stabilizer and elevator. Here is a hint when building the stabilizer. Watch the last three ribs nearest the tips since it is very easy to install them backwards. On later kits, these ribs are marked with an 'F' to indicate the front of the rib.

Rudder and fin construction is quite simple and similar to the stabilizer. No problems were encountered here.

The wings were built next with the bottom wing built first. Both wings are basically the same and since a problem was encountered in building the bottom wing and none in the top, I will only discuss the bottom wing. The basic wing construction goes together very well in that the ribs for the first half wing panel are slipped on two spars which are then placed on jig blocks so the panel can be built flat over the plans. Do not glue the ribs to the spars at this time. The leading and trailing edges and wing tips are first glued in place, then the ribs are glued to the spars. Next, two straight maple spar joiners, used to join the wing panels, are glued against the wing spars of one panel with the second panel being slipped on the maple spar joiners when the panels are ready to be joined. Because the maple spar joiners are straight and not angled for the dihedral they are inserted through the ribs at an angle to the main spars, the ribs are notched for this purpose. Thus, when both panels are joined, you should automatically have the proper amount of dihedral. Such was not the case with me since when building the first wing panel, I was about one inch shy. The solution here is not to glue the spar joiners to the first panel. Wait until both panels are built and then slip both panels on the spar joiners without glue. See if you have enough dihedral. If not, all that needs to be done is to deepen the notches in the ribs through which the joiners slip. My problem was that I glued the joiners to the first panel according to plan so the extra notching of the ribs could only be done on one panel and not both.

The ailerons are built integrally in the wing and cut out after construction is completed. The 'N' wing strut construction layout on the plans for my kit was reversed. On later kits, a correction sheet has been added.

The fuselage is of a keel type construction. The top and bottom keels are built directly over the plans followed by the bulkhead halves,, and then stringers for one half of the fuselage. When done, it is removed from the plans and the second and opposite half of the fuselage is built, in the same manner as the first. This type of construction worked quite well with no problems encountered. Make sure your engine fits the motor mounts. I had to widen mine slightly to fit the Webra 61. The one tedious job in building the fuselage is applying the strips of planking needed at the nose section. About 72 pieces are required and many must be beveled and tapered.

The kit shows the tail surfaces hinged with a bat piece of nylon hinge. This is okay but I would suggest a pinned hinge such as an RK or a Rand so that the control surfaces can be removed easily. I used RK hinges on all surfaces but instead of an individual wire for each hinge, one long piece was used to connect all the hinges on each control surface. The elevator needs two pieces of wire one on each side of control horn. (See sketch).

When the PT-17 was completed, the entire framework was sanded with a combination of 220, 320 and 400 wet and dry sand paper. The 220 sand paper is rather course and was only needed around the nose section of the fuselage to sand the planking strips to a smooth contour. The rest of the plane was sanded with 320 sand paper and finally 400 for a smooth finish. Any nicks or holes which occurred accidentally during the building were filled with Epoxybond Putty... "

1. Additional scan of the text of Step-5 on sheet 3, which is now legible. Thanks to Andy.
2. Zipfile containing all printwood files in PDF format, thanks to RickBenjamin. See the RCGroups posting here for more details: http://www.rcgroups.com/forums/showpost.php?p=23940604&postcount=11245 and explanation.
3. The same printwood files in DWG format, for CAD users.
4. Reviews.
5. Zipfile of parts, revised, in DXF format, from Athnansios.
6. Struts amendment PDF. 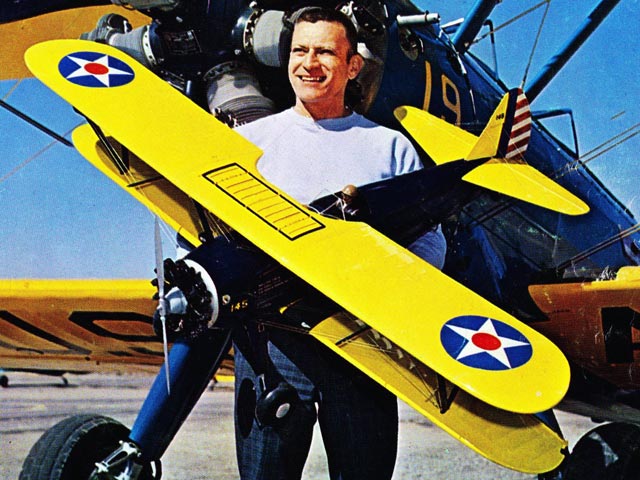 Great set of plans. Just one minor problem; the text for Step 5 on plan sheet three is illegible.
Nameless - 25/11/2012
Sigh. Yes, section 5 of the text on sheet 3 of 4 of this very rare and previously unavailable plan from 1967 is not legible. Good point. Can only suggest you go and find us all a better copy, scan and submit it, so we can all read it.
SteveWMD - 25/11/2012
Added legible text of Step-5 thanks to Andy. See Supplement.
SteveWMD - 09/02/2013
There is a (German language) page with some great photos of his build of the Stearman PT17 by Andy here http://www.mfc-kleve.de/abteilung2/0495809d0b0f1c802/index.html
SteveWMD - 09/02/2013
Added printwood files and kit review article, thanks to RickBenjamin.
SteveWMD - 14/03/2013
Hi Steve, I downloaded from your website about a year ago the plans for the Stearman PT-17 along with the drawing files. After I cut the parts I found out that some of them they were short in number (8 pieces of W8 and 8 pieces of W20), others were smaller in size or have the slots in the wrong place and one was totally missing (WT8). I fixed everything (I hope so), I managed to draw WT8 (I do not remember how, but it fits perfectly) and I added two additional drawings with the parts that were short in number (FS20-22 1-16 balsa 2ea and FS20-23 1-16 balsa 2ea). For my needs I enlarged the plans and the drawing by 1.1 because I believe is the right size for my Evolution Radial 735 engine. As soon as I build it up I will send you photos. Kind regards,
Athnansios - 01/09/2016
Just scaled to 1.1 Athnansios? Should be great to upload that 1.1 plans. I have a 7-35 waiting for a new plane.
WimVH - 31/12/2017
I don't have to upload the 1:1 plans. You download the existing drawings, open with Autocad and then use the "scale" command to enlarge them to the size you want.
Athanasios - 07/06/2018
Add a comment