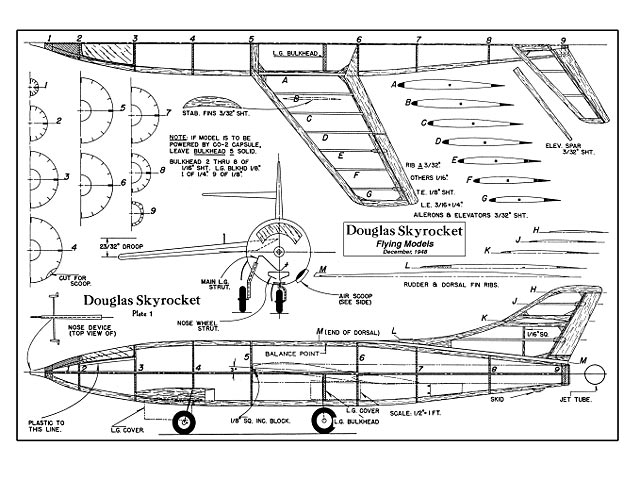 Here's a CO2 capsule-powered flying scale model of the US Navy's Douglas D-558-2 sonic research plane. It flies on 20 ft nylon lines ; it also will perform admirably as a whip job. In either case a variety of control systems will work - ours may be seen in the photograph above and in the accompanying plans.

If you're a solid scale addict, you can construct a neat model by building the Skyrocket from solid blocks, directly from our published plans. Close attention to airfoils, fuselage cross-sections, wing droop, landing gear details, and the nose device will result in an exhibition model that will catch the eye of your fussiest modelling friend. A solid model built from our plans will be to the scale of 1/4 in = 1 foot. For a flying-scale job, the plans herewith should be enlarged to twice the size shown. This will give you a ship to the scale of 1/2in = 1foot.

Building the fusealege: Cut two of each bulkhead-half, as indicated on the plans. Notch all bulkheads to receive top, bottom and side keel pieces, which are 3/32 x 3/16 balsa. All other stringers are 1/16 x 1/8 hard balsa. Build directly over the enlarged plans, pinning the top and bottom keel pieces in place first. Bulkheads cemented in place will result in a partially finished left half of the fuselage. Let dry, then remove from your workboard and cement the opposite bulkhead halves in place.

Next, place the stringers in position, cementing opposite (side) stringers, to prevent warpage. Not shown on the plans is the reinforcement of the top stringer between bulkheads 5 and 6, needed to carry the conduits which handle the control lines. This is accomplished merely by cement- ing extra sheet balsa to each side of the top stringer. Cut away the stringers on the top of the fuselage between bulkheads 2 and 3 and cover the space with clear plastic, as shown..." 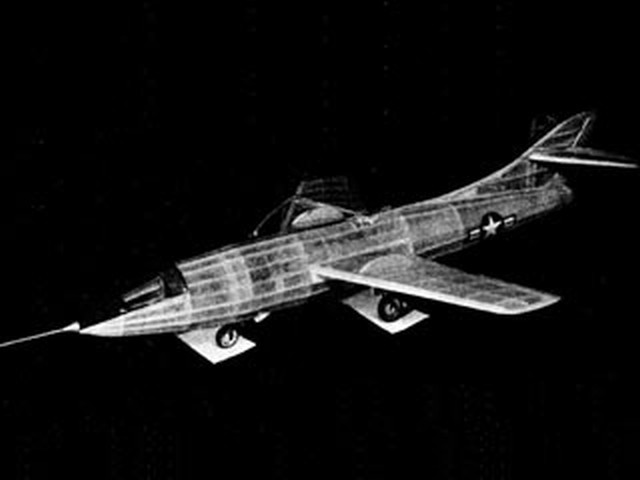