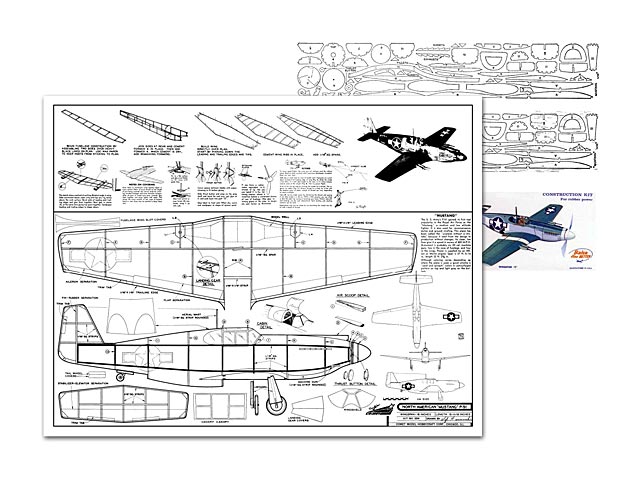 Quote: "The US Army's P-51 gained its first real popularity in the Royal Air Force as the 'Mustang,' a medium and low altitude fighter. It is also used for reconnaissance duties and ground strafing. This plane has been called the 'airplane without a mistake' because it went from the design to production without changes. Its clean, low lines give it a speed in excess of 400 mph.

Although coloring varies depending on where the plane is used, a good scheme is 'sand and spinach' colors in camouflaged pattern on top and light gray on the bottom." 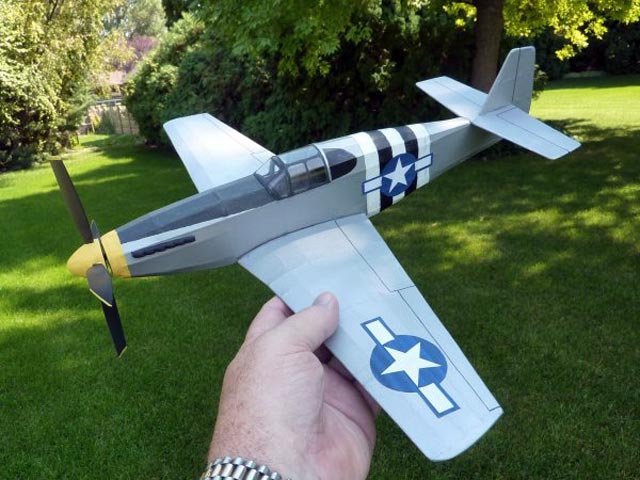 Greetings, This plan is listed as a P-51B. This is incorrect. The plan says simply P-51, and clearly shows an Allison powered variant. The P-51B was powered by a Rolls-Royce Merlin, and had and had a different engine cowling and radiator duct. Take care.
James Hickman - 19/08/2020
Fair point. Ok, have renamed this to P-51. Many thanks.
SteveWMD - 19/08/2020
Once upon a time, long ago, Mustangs filled the skies. There were even a few of them that called the local municipal airfield home when I was a young boy. I swear that I could tell when one of them was airborne merely by the sound. There’s nothing quite like the smooth distinct roar of a Merlin engine.
Of course everyone knows the story of the Mustang’s origin…American industrial power and British ingenuity. The RAF was in need of additional P-40’s for North Africa…which the War Department wanted North American Aviation to construct. Instead, NAA proposed the Apache (P-51A) using the P-40’s Allison engine. The British took it home, installed a Rolls-Royce Merlin engine, christened the new wonder-aircraft MUSTANG, and thusly was created the greatest fighter aircraft of all time. The Americans said, “Ah yes,” installed license-built Packard Merlin engines in all subsequent P-51’s, and you know the rest of the story.
I present to you Comet’s North American P-51A (oz37) metamorphosed into the renowned P-51B Mustang, complete with Merlin engine. The plan is a beginning…the remainder is within your imagination [main pic, 003-006]. Last photo is the same plan enlarged to 34-inch wingspan…and beefed-up accordingly [007]. The young lad (my youngest son) holding the model is now 40 years old! Yes, his mother color-coordinated his outfit for that picture. Only a mother could be that meticulous.
Thank you, Steve and Mary, for so many beautiful plans as well as a wealth of inspiration.
Neal Green - 06/10/2020
Add a comment