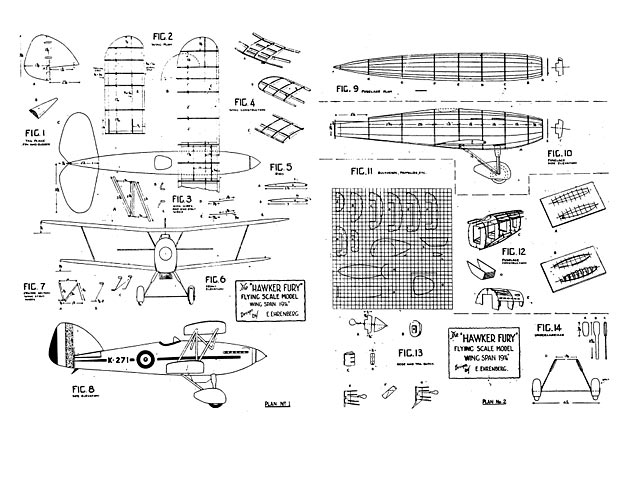 Quote: "How To Construct The Hawker Fury.

THE Hawker Fury is a well-known British single seater intercepter fighter, powered with a Rolls-Royce Kestrel Engine. The latest model, fitted with wheel spats, is known as the Super-Fury.

In adapting this design to a flying model, dimensions have been kept as near as possible to the full size machine, but owing to the fact that no authentic scale drawings are available for the Hawker Fury, a few points may vary slightly.

In this issue of Aircraft we will deal with the wings, wing and strut fittings, tail, fin, and rudder and fuselage and remaining parts will be given in next month's issue.

The wings which are staggered, are of unequal chord and span, and for stability in the model, the top wing is constructed with a dihedral of 4 inch. The model builder wishing to keep a true scale appearance, should make the top wing without dihedral.

A plan of the top wing is given in Fig. 2. Draw a full size plan of the wing and pin it down on a flat board. From 1/16 inch balsa cut two each of the spars for the wing halves and shorter spars for the centre section. As the di-hedral starts from the first rib from the centre on either side, it is necessary to have all spars in three pieces, and the trailing and main spars are r butted and pinned in position.

The ribs for the top wing, Fig 5a, are cut from 1/16 inch sheet balsa. 13 ribs are required, and the end rib of each half is cut off short to fit the curve of the wing tip, Figs. 2c and 4b, and sandpapered to about inch in depth.

When dry, the centre section is left pinned to the board, but the two outer halves are unpinned, and the tips blocked up a inch off the board. The junctions of the leading, trailing and main spars are then cemented, and a strip 1/32 plywood is cemented to the two main spar joins. The ribs at these paints are then fitted and cemented in position, Fig. 4a..."