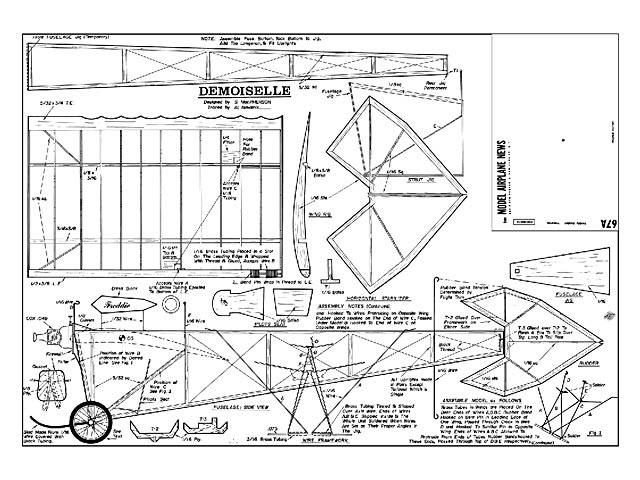 Quote: "Demoiselle, by Stuart MacPherson. Exciting and mysterious, best describe this free-flight scale right out of the past of aviation. Inspired by the incredibly funny movie 'Those Magnificent Men and Their Flying Machines' this pretty bird recaptures a very important part of aviation history.

I believe that the first time I encountered the Demoiselle was in something called The Golden Book of Airplane Stamps. Being young and completely fascinated by everything aeronautical, an airplane made from such things as bicycle wheels and bamboo naturally caught my imagination. Being a bit naive, I quickly reasoned that with a few nights work, those old bamboo poles behind the garage, and the wheels from my brother's bike, I could build my own airplane, my very own airplane! Think of it. Boy, would I ever be the envy of the kids at school. And for an engine I'd, I'd, hummmmm. Well, heck, Mom probably wouldn't let me fly it anyway.

A few years later, I came across the Demoiselle again. This time in the Popular Mechanics Aviation album. It seems that in 1910 Popular Mechanics ran a construction article in its magazine on the little plane complete with half a dozen 'working drawings.' Learning this, of course, rekindled my old interest and I was off to the library for photostats of the article. The drawings proved to be surprisingly detailed and I eagerly began speculating how to raise enough money to buy an engine for my bamboo bomb. Figuring the sale of my wheel-less bike and other quickly negotiable items, I calculated that it would take close to a year to accumulate the necessary amount. In the meantime I decided to construct a scale free flight of the Demoiselle with which to analyze its flight characteristics. However, as most of my projects usually fare, the Demoiselle soon found its way to a pile of 'started' models where it was soon forgotten. It remained thus until the release of the film 'Those Magnificent Men' which quite naturally inspired me to complete the model.

The Demoiselle was originally built in 1908 by Santos Dumont. It was constructed basically of bamboo and wire with muslin covering and was powered by a 35 horsepower water-cooled Darraque engine. The wingspan measured 18 feet and was 20 feet in length. Top speed was around 45 mph with such things as range and ceiling determined more often than not by what the pilot had for lunch on a particular day.

The model in this article is constructed to a scale of 1.5 inches equals 1 foot. The only variations in detail from the original are in the airfoil and the elimination of a cutout in the leading edge to accommodate the propeller. This latter modification is consistent with the Magnificent Men's Demoiselle which in fact had many minor details and construction modifications incorporated to increase strength and safety.

A Cox .049 Babe Bee is used to power the model as it was found that the .020 pictured was too underpowered to yield satisfactory per-formance. With the .049, performance is just about perfect, having enough power to overcome the huge drag of exposed sticks and wires while maintaining the slow and often comically erratic flight characteristics one associates with such an 'aeroplane.'

Construction: Building the Demoiselle will probably be a bit different from other models you've built. This is due to the use of some unconventional structural features designed to maintain scale appearance while permitting the use of rubber bands in assembly. And although
some parts may appear at first glance to be rather difficult, I am sure they are by no means beyond the capabilities of the average model builder (if there is such a creature). So, assuming that you are sufficient-ly enthused and forewarned, let's start building.

Tail Surfaces: The rudder and elevator are constructed over the plan, Cut the outline pieces from 1/16 sheet and glue together as shown. Next cut the 1/16 square diagonal braces and add these to the structures. Remove the rudder and elevator from the plan and gently round all outside edges, being especially careful of the elevator which at this point is somewhat easily broken in the middle.

To assemble the rudder and elevator into a single unit it will first be necessary to cover both structures. Before covering give both parts a liberal coating of a 50-50 mixture of cement and clear dope. Cover with white Japanese tissue being sure to run the grain of the tissue width-wise to prevent warping of the forward areas. Shrink the tissue with water and when dried, apply two coats of clear dope.

Cut two of the parts numbered T-2 on the plan and cement to either side of the rudder in the area where it meets the rear of the fuselage. Remove the tissue from the 1/16 channel in the middle of the elevator and, spreading glue in this channel and on the center of the rudder, slip the elevator onto the rudder. Fit the two 1/16 square nubs on the front of the elevator into the notches of the T-2 braces and square up the whole structure. While this is drying, bend two pins to the outline shown on the plan and stick them into the top and bottom of the rudder. Cut two T-3's and glue them directly on top of the T-2 parts. Finish the unit with another coat or two of dope, straightening any warps that might have shown up.

Fuselage: Begin construction of the fuselage framework by building the bottom over the plan. Use hard 5/32 square balsa for this as well as for the rest of the structure. When the bottom is dried remove it from the plan and tack cement the front and rear (T-1) jigs in place. After these have dried for about 5 minutes glue the top longeron on the jigs and line up the assembly over the side view, The front jig should line up with the second upright and T-1 should be angled as shown.

Allow this assembly to dry quite thoroughly and then mark off the position of the uprights on the top longeron as shown in the side view. Cut and bevel the uprights to fit between the top and bottom longerons and cement in place being careful not to bow the longerons in the process. It is best to install the middle pair of up-rights first and allow them to dry before adding the others. Always install the up-rights in pairs.

Before continuing with the construction of the fuselage, it will now be necessary to build and install the wire framework shown on the plan. Most models, especially scale ones, are plagued with their nightmares of wirework and I am afraid the Demoiselle is no exception. Its wire structure consists of a combination of struts, wing mounts, and axle all soldered into one pathetic complication. But have heart, if one as obviously unorganized as the designer could construct it, then, with the aid of a few chosen curses, it should be possible for most anyone. 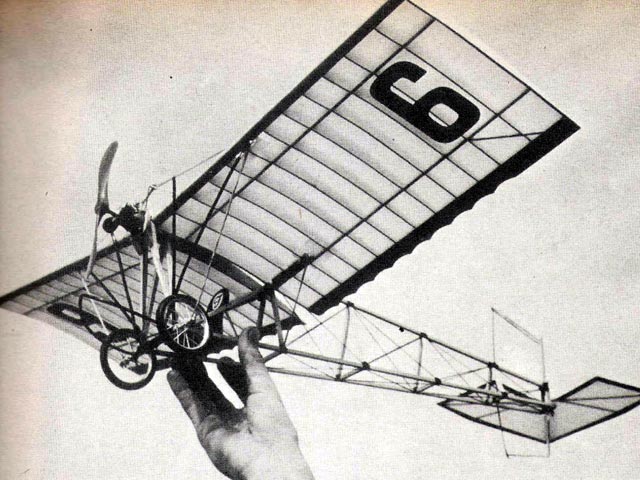