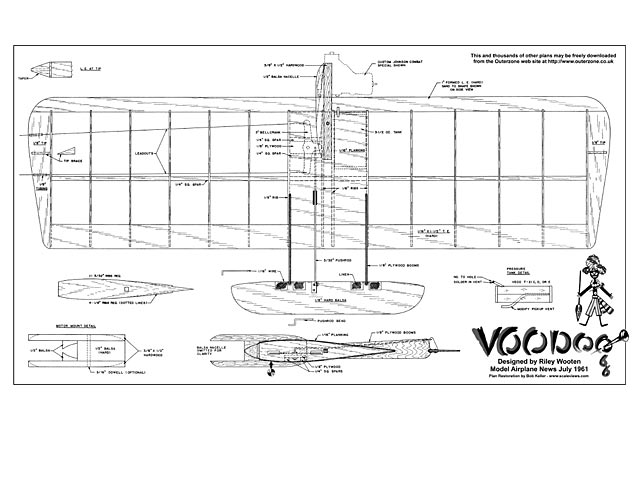 Quote: "Here's a full-size PDF format plan I've worked up for Riley Wooten's immortal Voodoo control line combat model published in the July 1961 issue of Model Airplane News, and subsequently kitted by Carl Goldberg. The Voodoo was the design that popularized the stabilator type combat model and it was one of the first combat models to fly at 100 mph plus.

I built and flew Carl Goldberg Voodoos back in the 1960s. My first Voodoo was powered by a Fox 35 stunt and I made a lot of flights with it in a circle that I was allowed to keep cut low out in the hay field. That Voodoo was really fun to sport fly and it is the model that I really learned to stunt with. So the Voodoo has special nostalgic appeal for me.

I used a 36 in wingspan as the metric for scaling the full size plan. A sincere thanks to the anonymous collaborator who provided the high resolution scan of the original magazine plan page that I used to generate this full size plan, as well as scans of the magazine article pages presented here."

Quote: "National's Combat winner in '59 is only part of the winning record of this model. Design so well thought of that Carl Goldberg, who has never kitted any independent model design, will be offering a kit for the model very shortly. Voodoo, by Riley Wooten.

The first thing you will probably notice about the Voodoo is that it uses a 'flying tail' or stabilator as the control surface instead of a stabilizor and elevator as is normal practice. I first tried the flying tail in the spring of 1959 and since that time I have done quite a lot of experimenting with it. This plane is the result.

The flying tail is not a new idea, having been used on full scale aircraft for some time. It has also been incorporated on some of Thimble-Drome's ready to fly plastic models for several years. Those of you wanting more information on the flying tail might consult the March, 1957 issue of MAN. In this issue Bill Netzeband touches on the subject in his article on stunt theory.

The Voodoo was designed as an all out competition combat plane and as such has done real well in contests. It was entered in six contests this year and won 3 firsts, 1 second and 'two collision zones.' An earlier version was used in winning first place in open combat at the 1959 Nationals, however it was creamed in the quarter finals and I had to finish with another design. This record, combined with the quick, rugged construction has made it very popular with the combat flyers in this area.

I do not use any engine offset and I do not use a wing tip weight in this plane yet it gives a good tug on the lines and you can fly in almost any wind. Upwind maneuvers are no problem, even in a good breeze and you will find the Voodoo at home on any side of the circle. I think this is a must for a combat plane as it always seems to be windy on contest day... "

Article.
Decal as jpg image, thanks to GeorgeAlbo. 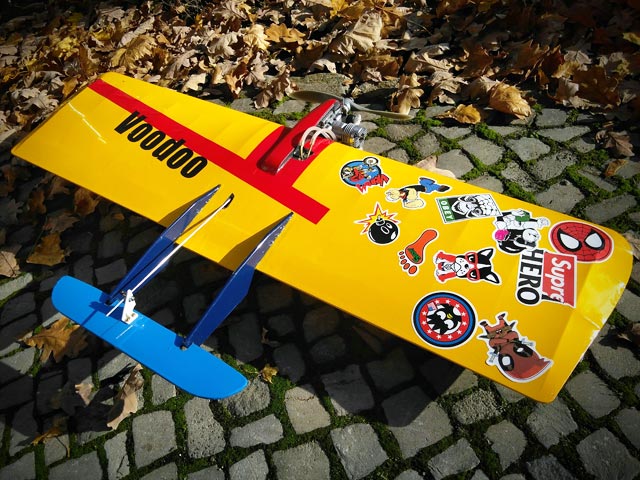